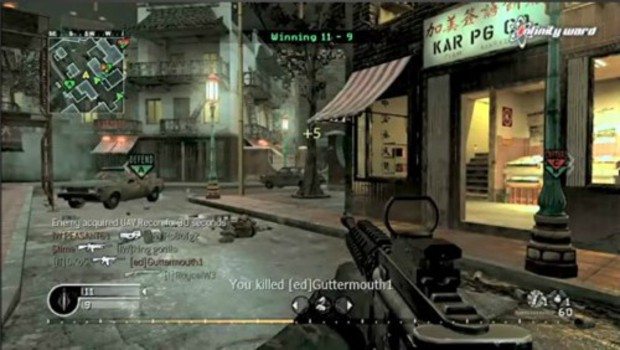 As the palpable excitement amongst gamers grows on the eve of the Call of Duty: Modern Warfare 3 midnight release, fans of the series are undoubtedly attempting to hype themselves for the self-proclaimed “most anticipated game in history.”  A great way to prep oneself for the thrill of the virtual battlefield is by watching developer videos that highlight the game’s new features and modes, such as this one which details the new gametypes you’ll be experiencing in Modern Warfare 3. As much as I think the Call of Duty franchise needs an overhaul that Activision is unwilling to give, I would be remiss if I didn’t admit that I’m excited for MW3, yet the “new” modes that have been discussed are not exactly the ground-breaking changes I was considerably hoping for. Mainly, because I feel like I’ve already played them before.

“Kill Confirmed” is one of the game’s new featured modes and it will be a variation of the standard TDM. Yet instead of progressing your team’s score simply by taking out enemy players, you’ll be required to collect your kill’s dropped dog tags in order to get the team points. It’s an intriguing premise, and knowing when and when not to rush out into open space to risk getting each player’s dog tags will be a vital attribute to any skilled player in this particular mode. Although, as I watched the developer video detailing the new gametype, I began to feel a strong sense of déjà vu. Hadn’t there been a relatively recent FPS that included the utilization of dog tags in multiplayer, one that I had played for a very brief period and was ultimately disappointed by? I looked toward my shelf of games and discovered, at the bottom (typically where games I don’t touch for quite some time end up), the cause for my sensation of   familiarity – Crysis 2.

Crysis 2’s multiplayer requires players to pick up enemy dog tags in order to gain map-specific perks, and the “Kill Confirmed” mode in Modern Warfare 3 will work in a similar fashion. You’ll get the regular XP for each kill you rack up and additional bonuses if you’re able to maneuver your way to the body to retrieve the dog tags. The gametype isn’t a carbon copy of Crysis 2’s mode however, and one feature specifically that will add significant variety is the “kill denied” element which allows you to collect the dog tags of downed teammates in order to prevent the opposite team from getting the points for that particular kill.

The “Kill Confirmed” mode is rumored to have been implemented in an attempt to reduce the incentive for players to camp. It’s a valiant idea on the part of Infinity Ward, in theory, but campers will inevitably find a way around it. When it comes to camping, if there’s a will, there is most certainly a way. For example, a combined duo could designate one player as the camper/shooter while the other serves as the “runner”, simply coming out from their hiding spot for the sole purpose of collecting the tags. It’s a combo that could do some major damage in that particular gametype, but it essentially comes down to whether or not someone will volunteer to play the part of the selfless “runner” who collects the tags on behalf of the team rather than opting for individual points.

“Team Defender”, which will also be making its first appearance in the Call of Duty franchise, is less subtle in its imitation of a popular gametype that FPS gamers are extremely familiar with. Within the first 10 seconds of having the mode explained, I was instantly reminded of Halo’s “Oddball”, but MW3 players will have to do without the cool-looking skull in favor of a piece of cloth attached to a pole (i.e. a flag). One addition that this mode will bring which shouldn’t be overlooked is an element of teamwork that is generally missing from the more popular CoD gametypes. “Team Defender” will not only encourage teammates to work together in order to protect the flag carrier, it will require them to.  Oddball games in Halo are often decided within the first few minutes of the match, as organized and communicative teams tend to dominate while teams consisting of individual slayers are inclined to fail hard.

It goes without saying that gamers who are on the fence about whether or not to buy Modern Warfare 3 are not likely to be swayed by a few new gametypes. The game’s new weapons progression system however, may prove to be satisfying to new and experienced players alike. Players will have the ability to level weapons individually, and in addition to unlocking the standard attachments and camos, weapon proficiencies will now be granted as well. These are essentially enhancements to each respective weapon that can be geared toward a specific playstyle. The proficiencies include unlockable features like gun kick, impact, attachments, focus, breath, and stability, and certain weapons will have proficiencies that are unique to it.

Personally, I can see proficiencies becoming an invaluable asset to the longevity of CoD multiplayer. During my time playing Black Ops, I was a huge fan of the Galil and began to use it almost exclusively as I ranked up. Through certain prestige levels, I actually wouldn’t even bother purchasing the weapons that were unlockable after it as I knew that I would use them very sparingly. However, the Galil not only has a significant kick, but it also has a slower rate of fire than some of the other guns, so I was at a disadvantage on smaller maps that matched me up close to players with SMGs. In this sense, proficiencies will come in handy when you want to subtly tweak a particular weapon to better suit a certain map or gametype.

I may knock Call of Duty games from time to time for what I see as reiterations of the same core product, but that core product unquestionably speaks for itself as one of the best multiplayer experiences money can buy. The series has its flaws, sure. But the stability and replayability that has come to characterize the franchise will undoubtedly be present again in Modern Warfare 3, and I would be nothing short of a hypocrite if I said I wouldn’t be partaking in Infinity Ward’s latest installment.