Counter Strike:GO hands on at PAX 11

The latest news in the world of video games at Attack of the Fanboy
August 27th, 2011 by William Schwartz 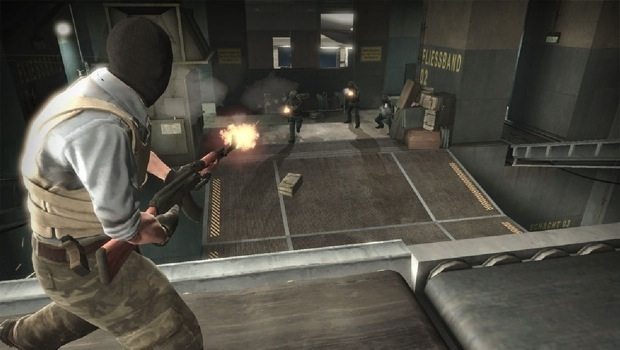 It’s hard to nail down what exactly propels the legions of Counter Strike fans to play a game that is now somewhat dated. Counter Strike is one of those games that defies the now conventional formula that “AAA” games follow. The game managed to foster one of the biggest online communities on the PC, one that is passionate about the game, despite how it may match up to more modern shooter alternatives.

Outside of the halls of Valve, PAX Prime was the first public showing for the game, and fans lined up in droves to play the latest. Talking amongst fellow gamers in the snaked line for the game, pre-play impressions were wide and varied. The hardcore fans had their concerns right out of the gate. A couple scoffed at the fact that Valve would be attempting to reach a much wider market for the game, and would be looking at the Xbox 360 and PS3 to get there. Casual shooter fans may not have known too much about what Counter Strike is all about, but just judging from the pre-play videos that surrounded Valve’s booth at the convention, one concern that came up when talking to my line mates, was graphics. For the most part their eyes were right, Counter Strike:GO certainly isn’t trying to be the next big thing from a visual standpoint.

What many of those fans didn’t quite understand, was that, that wasn’t what made the other Counter Strike games such a smashing success. Counter Strike has always been a fairly straight forward game. Simply put, Terrorists and Counter Terrorists square off in a quick and dirty Deathmatch, or objective style game mode. Kill all of your enemies, and stop them from completing their objective, and you’ll be rewarded handsomely for your efforts. You can put your in-game cash earned to good use, purchasing new weapons, giving you additional firepower and other perks.

You would think that with the game being one of the most played PC games of all time, there would be a PC somewhere on hand for the demo. Sadly PC fans, this wasn’t the case. On display was the Xbox 360 version of the game, but it managed to ooze the same charming fast pacing of the previous games. The map we played on was logical and to the point, there wasn’t much room for error in the relatively small area. Honestly, it felt like Counter Strike. There was really no gleaming quality that jumped out and separated itself from it’s iterations of the past, aside from next generation visuals. That being said..again, it certainly not going to bringing home any awards in the graphics department. The gameplay that was on display was tight and familiar to fans of the franchise. Especially when you throw the Xbox 360 controller into the equation.

Because of this, I think it’s gonna be an uphill battle for Valve. They’re in a bit of a conundrum. They basically need to sell the intangibles of the game to the console crowd that in more cases than not judge books by their covers, or in this case the flash and sizzle. What works in their favor however, is that game is just as fun and addictive as it’s older brothers. I know my teammates all wanted another go, and our adversaries wanted revenge.

Counter Strike: Global Offensive will have an extensive PC beta which is scheduled for sometime in the future. The game will launch on the PC, Xbox 360, and PS3 of which you can bet Valve will be lobbying hard to get the Steamworks integration across all platforms, though no official word has been given.