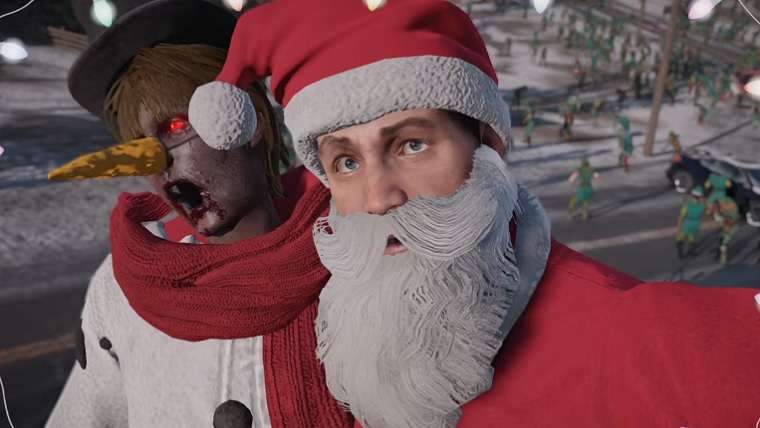 Dead Rising 4 is already a Christmas game due to the fact that it takes place around Christmastime and features plenty of festive weapons like an electrified wreath and a candy cane crossbow. However, there can always be more where that came from and now the developer has released the game’s first DLC. It’s called the Stocking Stuffer Holiday Pack, and features all kinds of crazy new items for Frank West to lay waste to zombies with.

As for the kind of content that you can expect to get with this DLC, it allows you to dress up in a Santa suit and use new Christmas-themed weapons and vehicles to dish out even more pain than before. There’s also good news for fans of the game’s selfie mechanic, as there is now a new filter that adds a Christmas-themed border to your pictures. This DLC essentially offers more of what the game already offers, which may be a good or bad thing depending on your point of view.

This Stocking Stuffer Holiday Pack DLC is available as part of the game’s $20 season pass, but you can also buy it individually for $5. This is set to be one of the smaller releases of the season pass, as next year will add things like Ultra Super Dead Rising 4 Mini Golf and Frank Rising. The mini golf mode in particular is set to be pretty interesting, allowing you to play online against opponents around the world.

There will be some free content that will be coming to the game in the new year, as well. Capcom has announced that the game’s story mode will be getting more difficulty options next year, which will apparently make enemies tougher and weapon durability weaker. Considering that the game can get pretty easy once you’ve reached a high enough level, this will be a nice way to keep things challenging for veterans.

Dead Rising 4 is available now for Xbox One and PC, though it is expected to come to PlayStation 4 sometime in 2017. You can check out our review of the game by clicking right here, and be sure to check out the trailer for the new DLC below.