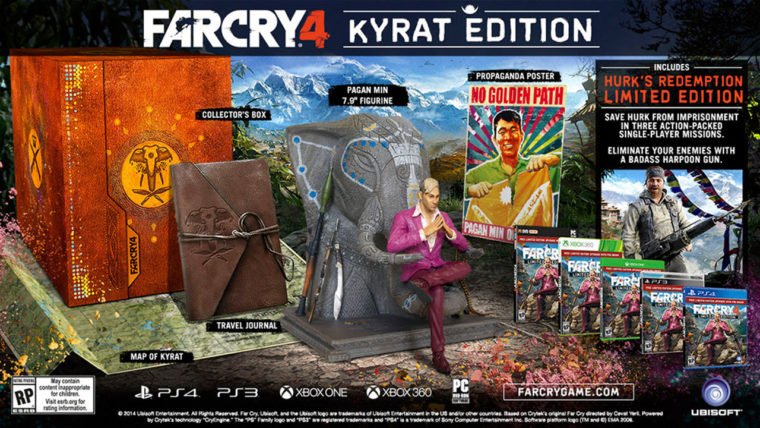 Far Cry 4 is looking to be one of the most anticipated games of the year, so of course it is getting a huge collector’s edition release. Titled Far Cry 4: Kyrat Edition, this special version comes with a ton of exclusive content for collector’s to display or otherwise enjoy. Ubisoft announced the Kyrat Edition alongside an “unboxing” video, which actually doesn’t unbox anything, but who cares. The video is definitely worth checking out, especially if you’re considering picking up Far Cry 4: Kyrat Edition for yourself.

Find out what’s inside the ultimate collector’s edition of Far Cry 4, the Kyrat Edition.

The full, official contents of Far Cry 4: Kyrat Edition are:

Everything in the set looks gorgeous, having an authentic feel for the setting of the game. The travel journal especially seems like a nice touch. Collectors, of course, will be most interested in the Pagan Min figure. Most of the marketing for the game has centered around this new antagonist, and given the history of the series he could easily become one of the best villains in gaming. We’ll have to wait and see how fun/evil the character ends up.