The latest news in the world of video games at Attack of the Fanboy
September 11th, 2013 by William Schwartz 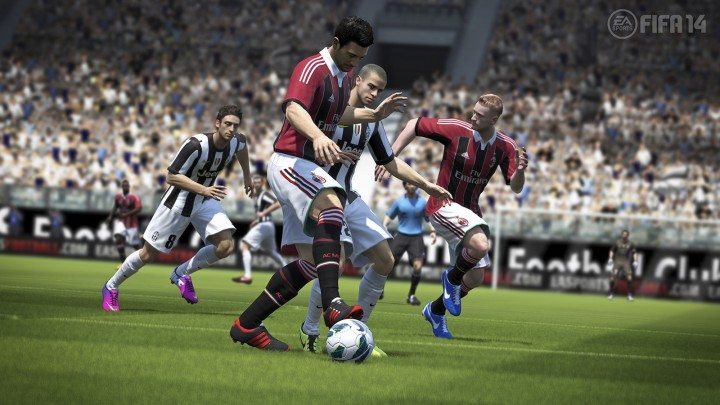 The FIFA 14 Demo is upon us and although it doesn’t fully represent the gameplay of the final product, it’s still closer to the finished thing than FIFA 13 is. This means that if you’re looking to get a head start on FIFA 14, then the demo is the best place to practice. Here is my analysis of FIFA 14’s new features, and tips on how to best utilize them.

Defending has noticeably changed from FIFA 13, in the demo at least, so these are a few suggestions for getting to grips with the new system. Correct positioning of your defenders is the main necessity. Due to the new player momentum mechanics, you can’t just run a centre back out and expect to be able to recover if you mistime a tackle. Patience pays dividends both in defending and attacking, so hang back and don’t be rash.

LT/L2 is now used for shielding the ball, and is one of the most useful buttons for defending. FIFA 13 would normally let you run into or alongside a striker and automatically take the ball off them. That’s not a very viable tactic anymore. Instead, try squeezing LT/L2 when near a player, and your defender will often shield the opponent off the ball and you’ll gain possession.

Equally, one of the best tactics when running next to, or slightly behind, an attacker is to press the standing tackle button (B/Circle) 2-5 times. Depending on how strict the referee is, you can normally get away with 3 or 4, and this will normally pull the attacker back and win you possession.

Passing seems a lot more reliable in the FIFA 14 demo. The use of through balls and lofted through balls is more effective, so be sure to look for wingers sprinting down the sidelines. You’ll have far more success getting the ball to them than you used to.

You might want to take a touch before passing most of the time though. Not only is it more realistic, meaning the angles you can pass to successfully are reduced, but slowing up the play leaves more time for attackers to accelerate into space.

Both finesse and chipped shots are more powerful now. This doesn’t mean use one or the other religiously, but try to get out of the habit of always trying to launch the ball into the roof of the net, or beating the keeper at his near post. Finesse shots are excellent if a defender blocks the way to goal, and chip shots are more reliable than previous FIFAs.

Corners also appear quite powerful, so don’t be afraid to shoot. Make the goalie work, and if it doesn’t go in then at least you might get a corner and another chance to get a goal. They do seem harder to curl in though, so try to aim at around the penalty spot and cross the ball in straight.

Skill moves no longer require LT/L2 to be held down. In fact, due to LT/L2 shielding the ball, holding it will actually make you slower on the ball. Your muscle memory probably won’t like this at first, but you’ll get to grips with it after a while. Also, try to attempt skill moves when the ball is closer to your player’s feet and you’ll have more success.

Dribbling feels very different this year. LT/L2 turns aren’t overpowered anymore, and you’ll have to rely on the close control of LB/L1 if you really want to twist and turn. The best piece of advice I can give is not to keep the sprint button (RT/R2) held down all the time, unless there’s significant room in the direction you’re heading.

Whether rubbing the deciding goal in your opponent’s face, or showing off after a spectacular strike, what would FIFA be without Celebrations? Most people have a favorite celebration or two, but there are some new ones in the FIFA 14 demo that shouldn’t go untried. Here’s my personal selection of some of the best:

EA recently released a video of new celebrations in FIFA 14, but most of them are Pro or EASFC Unlockable only, so they can’t be used in the demo.

Attack of the Fanboy will have more FIFA 14 content soon including a review and tips for the full version.