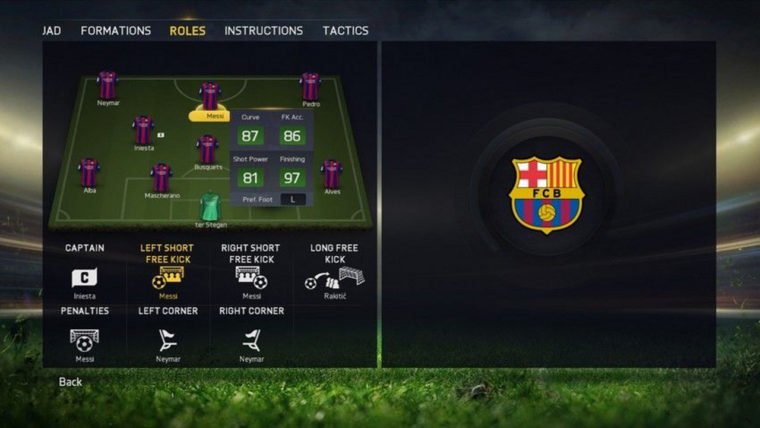 EA Sports has unveiled the newly revamped Team Management system that will be featured in FIFA 15. The system will allow you to manage individual squads and team sheets across every gamemode in FIFA 15. You can have up to six different Team Sheets per club, which will allow you to alter your strategy based on multiple factors such as who you are playing against, the individual fitness of your players, and changing strategies mid-game.

Our all new Team Management layout makes it easy to go deep on customizing your team.

Using the Team Sheets you can assign different instructions, formations, roles, and tactics for multiple players. Five attacking and defending instructions can be split among the ten outfield players. Using these wisely will allow you to manage attacking runs, or defensive maneuvers. Formations are all preset, so you just need to select the one that is appropriate for your current situation, and select the best one for the next opponent. Roles, such as captain, set-piece, and penalty taker can be assigned to each of your squads. Each of your six Team Sheets can have a default Tactic selected, allowing you to lock in your team’s strategy before the game even begins. You can also get more in-depth and add custom tactics to your line-ups.

Every aspect of the Team Management system has been refined to give you more control over your team both before and during your games. This will be especially helpful given the many extra teams being added to the FIFA 15 experience. All 18 teams from the Turkish League have been added, as well as the Barclays Premier League, along with all of their stadiums.