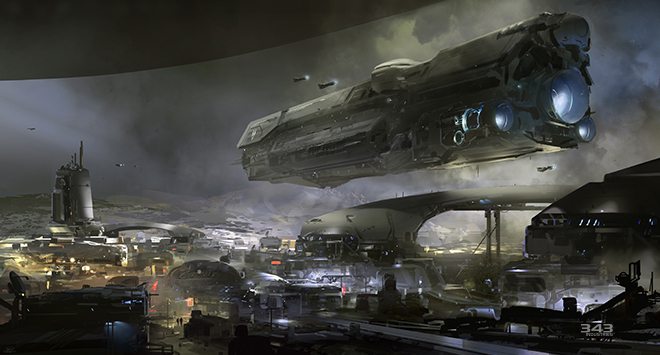 Conceptually, this is what the Halo on the Xbox One is going to look like. Giving fans something to talk about, 343 Industries released the concept art for Halo 5 which is seen above.

Halo fans haven’t heard much since the teaser announcement back at E3. The big news has been movement of key staff within 343 Industries. Nevertheless, this new concept art looks promising for the Halo franchise. The focal point is what appears to be the UNSC Infinity, the central hub found in Halo 4. Aside from the Infinity, there just aren’t many other details to garner from the lone image.

That should be changing as the year starts picking up. Microsoft has already confirmed that the next leg of the Halo journey will begin in 2014, so their marketing efforts will likely kick off ahead of the fall, which would be the expected release window for a Halo title.

While there will be other big shooters for the Xbox One this year, Titanfall and Destiny come to mind, Halo is undoubtedly Microsoft’s biggest first party franchise.

Home / Game News / Halo on Xbox One looks like this