Lots Of New Yooka-Laylee Info Released, Demo Out In July 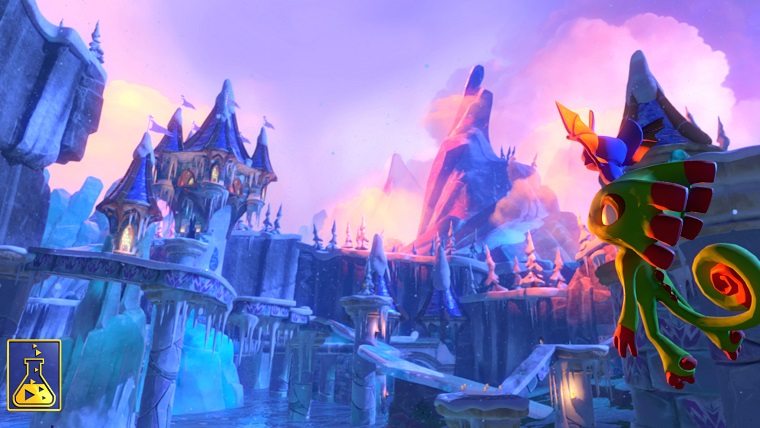 It won’t be long now until everyone will finally be able to get their hands on the highly-anticipated spiritual successor to Banjo Kazooie, with Yooka-Laylee still set to launch this October. While he hadn’t gotten a whole lot of information regarding the game, developer Playtonic has now revealed a lot of new details for everyone to check out.

Thanks to the game’s new web page we now have a lot more information on the game’s story, collectibles and more that you can get a piece of below:

“Yooka and Laylee’s adventure will take them deep inside the work halls of a baneful business, as the buddy-duo seek out the magical Pagies required to explore the mysterious Grand Tomes. The dexterous pair will seek to unlock the ancient secrets of these bewitching books, as they battle to thwart corporate creep Capital B and his devious scheme to absorb all of the world’s literature… and convert them into pure profit.”

“Our ambition with Yooka-Laylee is to create a story and cast of characters that will live on as part of future Playtonic Games, so you can be sure there will be plenty of secrets, back stories and punch lines to discover when you join the Lizard and Bat on their epic adventure.”

The game will feature plenty of collectibles to sniff out that have a focus on gameplay progression. Tasty Butterfly Energy refills the health and power meter, with the power meter being used to encourage “fun and challenging platforming gameplay while avoiding the all-too-occasional tedium of resource management.” There will also be Pagies to “unlock the magical Grand Tomes held captive in Hivory Towers.”

Playtonic has revealed that the team’s size has tripled since beginning Yooka-Laylee last year, with the end goal finally in site. More information is expected to be shared over the next several weeks, with the game being featured in the May 26th issue of Edge Magazine. The game will also be making an appearance at E3.

However, they also revealed that they aren’t quite ready to reveal the game’s release date yet, though they say they’re getting close. They are committed to releasing the game with as much polish as possible, so as soon as they have done that they will inform everyone what day the game will come out.

Kickstarter backers who sprung for the tiers that included the “Toybox” are in for a treat, though, as the demo for the game will be released in July. Playtonic claims the delay in the release for this demo is the result of their original intention for it expanding into something much bigger. They insist it isn’t a traditional demo, but is more its own thing that gives a taste of what is in store for the full game.

A lot more Yooka-Laylee information is on the horizon, so be sure to stay tuned for that. You can check out all of the new information released on the game by clicking right here.