A Machine That Plays Both PS4 And Xbox One Games

The latest news in the world of video games at Attack of the Fanboy
January 14th, 2015 by Damian Seeto 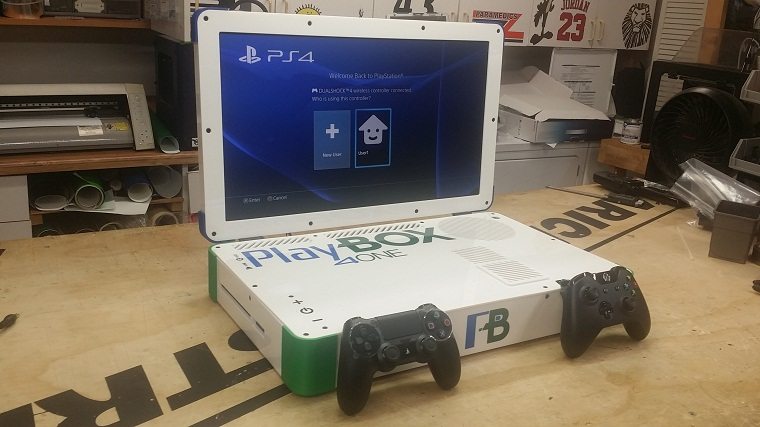 Someone has now managed to manufacture a custom built laptop that acts as both a PS4 and Xbox One console.

It is called the “PlayBox” and is a 22 inch laptop that is half of a PS4, and half of an Xbox One.

Ed Zarick is the smart engineer that has been able to combine the PS4 and Xbox One into one beast of a machine. He previously made PS4 and Xbox One laptops separately, but this time they’ve been combined as one.

The design of the PlayBox was inspired by the “XbookDuo” which combined the Xbox One and Xbox 360 consoles into one machine.

Zarick described more about the PlayBox on his own blog. The left side of the machine is a PS4, while the right side is the Xbox One. The whole laptop only requires a single power cord, but only one unit can be powered on at one time.

A red switch at the back of the PlayBox alternates power between the PS4 and Xbox One, while a smart HDMI switcher is inside to change the appropriate signal to be broadcast.

This PlayBox has only been made for one customer and is not for sale. Zarick said it costs a lot of money to develop, but says he might make more additional units in the future.