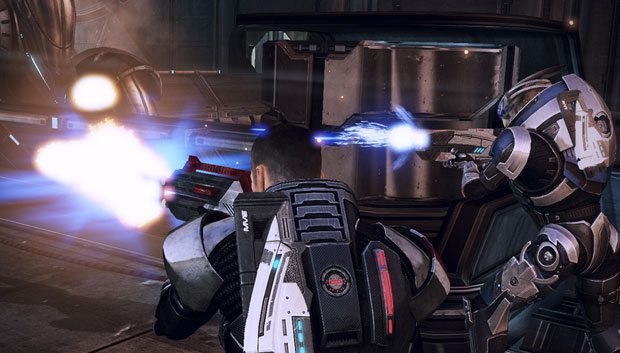 Mass Effect 3 has been rumored to contain a multiplayer aspect to it ever since Xbox 360 World listed a rumor in a recent issue of the magazine.  Gamers and journalists alike have been scratching their heads to figure out why Bioware would delay the RPG into 2012, and the answer that keeps coming back around is to incorporate some type of multiplayer functionality.  What makes the most sense for a game like Mass Effect 3, would be some type of cooperative game mode.

Eurogamer who also reported on a “stand-alone” multiplayer feature that has been rumored to be similar to a horde style gamemode, believes that the mode might not be mission based.  But an Italian issue of the Official PlayStation Magazine (Sept) suggests once again that Mass Effect 3 will feature a four player co-op mode.

I’m all for more Mass Effect in any shape or form, but the only thing that seems odd about the four player rumors, are that Mass Effect has never been a four player game.  Shepard has always rolled with two allies, and why Bioware would change this for only one game mode would seem a bit weird.  Now three person co-op, there’s a rumor I can really get behind.

What do you think about these latest Mass Effect 3 rumors?  Does Mass Effect 3 need multiplayer?  Let us know in the comments section below.