The latest news in the world of video games at Attack of the Fanboy
August 30th, 2016 by Kyle Hanson 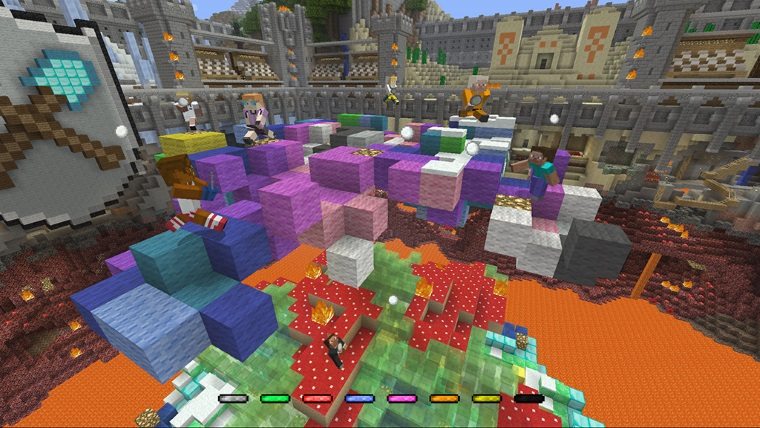 Minecraft Battle Mode was always meant to be the start of something new for the console versions of the hugely popular game. More mini games were said to be coming, and today we get our first addition to the game since that initial offering Minecraft Tumble Mini Game is rolling out across all console versions of the game today, bringing a new way to compete against your friends.

“Break blocks and bring your foes low! Tumble is the second mini game we’ve released for Console Edition – a frantic competitive clash in which players destroy the very floor beneath their enemies’ feet, sending them plummeting to their doom,” reads the announcement from Mojang. “Sound familiar? It’s inspired by community favourite: Spleef! We wanted to bring that experience to console and, as with Battle, streamline the experience so players don’t have to worry about re-setting maps between matches or even keeping score.”

There are currently two different ways to play, giving players snowballs or shovels to deal terrible, fiery death. “Each bout consists of a best of three, on a series of semi-randomised maps, each with several layers of differing materials and hazards. Do you duke it out at the top, or tactically drop a level, blasting your opponent’s perch from beneath? Take care not to get glued to slime blocks or trip over TNT!”

Minecraft Tumble Mini Game should hit PS3, PS4, PS Vita, Xbox 360, and Xbox One. The Wii U version should receive it later this week.