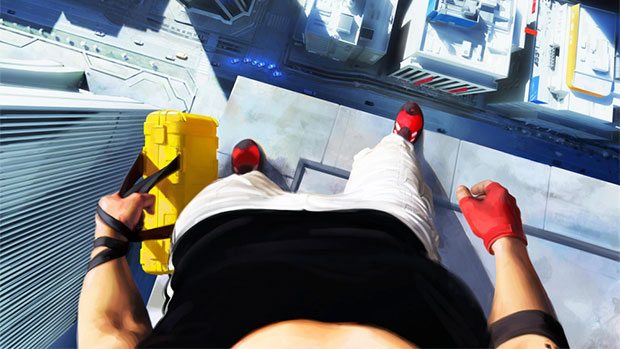 The newly released Aftermath expansion for Battlefield 3 features an interesting Easter Egg that’s sure to get Mirror’s Edge fans excited. High atop one of the buildings in the game, you can find Faith’s trademark red running shoes peering out over the corner. To solidify the secret, you can also hear the character breathing when you near the shoes.

Mirror’s Edge 2 speculation has ramped up in recent weeks. DICE went on the record as saying that they want to be known as more than a “Battlefield Factory”, and meanwhile a former DICE employee revealed that it was a well known fact in the Stockholm game developer scene that DICE has been working on Mirror’s Edge 2 for some time.

The Mirror’s Edge Easter Egg can be found on the Markaz Monolith map, part of the Aftermath expansion, but it’s not the only secret to be found in the new content. The same YouTuber has also discovered a new Dino Easter Egg on the Epicenter map.

The Battlefield 3 Aftermath expansion went live for PlayStation 3 Battlefield 3 Premium subscribers earlier this week. Whether or not the hidden content will be in the Xbox 360 and PC versions of the expansion is yet to be seen, but players will find out next week.