The latest news in the world of video games at Attack of the Fanboy
May 15th, 2015 by Dean James 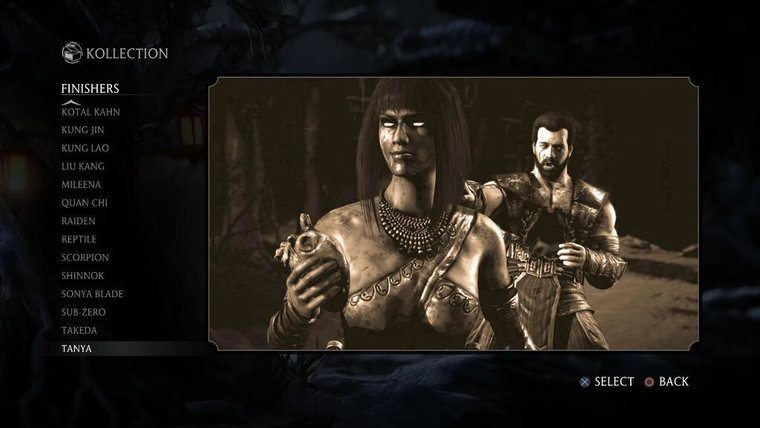 Some of the DLC practices surrounding the launch of Mortal Kombat X were pretty questionable with the Easy Fatalities and Krypt unlocks, but NetherRealm themselves have proven in the past that they care about the fans and provide a steady stream of free content to go alongside the paid DLC. We already got a free Klassic Sub-Zero skin last month in a new patch and now the latest patch for the game has arrived that has some Tanya info hidden within, along with another free Klassic skin.

Fans have been clamoring for a more traditional costume for Reptile and the Klassic Reptile costume is as close as it will get it appears. Sadly he still retains his reptilian form and isn’t a human ninja wearing green, but it is still cool. This should automatically be added with the game’s patch, but there was some other information within that seems to hint that we may be seeing Tanya sooner rather than later.

As acquired by Takeda on Twitter after the patch, some screens of Tanya on the Finisher page that appears to show her knack for stealing the hearts of enemies. It was believed before that she’d come later, but her being in this patch makes one thing it could have been the compatibility patch for her, meaning she is the next DLC character coming to Mortal Kombat X. NetherRealm and WB Games have also revealed the full patch notes for Mortal Kombat X’s new update, which you can see right here that shows all the buffs and nerfs given to characters.

The PlayStation 4 patch is already out for sure, but Xbox One and PC are still to come, though Xbox One at least is expected to be very soon. Stay tuned for details on when that patch is available.