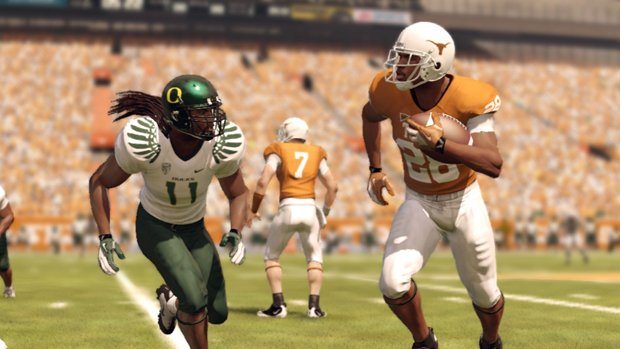 You might not be able to relive your football sim glory days of playing ESPN NFL 2K5 on your PS2 or Xbox anytime in the near future. But hey, you might be able to play a 2K developed NCAA Football or Arena Football League game as early as 2014! Though if you played NCAA College Football 2K3, 2K’s last collegiate endeavor, that news probably isn’t of much recompense to you.

EA has finally reached a settlement in a class-action lawsuit that dates as far back as 2008 when it was filed as a result of claims that accused the publisher of violating antitrust laws by entering exclusive license agreements with the NFL, NCAA, and AFL. The settlement landed upon $27 million, and EA will not be able to renew its exclusive agreement with the NCAA for five years when it expires in 2014 nor will it be able to sign any exclusive licensing arrangement with the Arena Football League for five years.

What does that mean for you? Aside from having a glimmer of hope that 2K or another developer may decide to produce a competitor to EA’s NCAA Football, you might be entitled to some money, albeit, very little money. The proposed terms of the settlement state that anyone who has purchased a Madden NFL, NCAA Football or Arena Football product for the PS2, Xbox, GameCube, or PC from Jan. 1, 2005 forward is eligible for $6.79 per title with an eight title limit. Should you have purchased any series title for the Xbox 360, PS3, or Wii, you may have a whopping $1.95 coming to you. Details have yet to be announced on how eligible recipients will actually be able to collect their sum, but talk is that the EA Sports database may be utilized for verification.

The lawsuit stems from 2004 when 2K pulled a bold and seemingly ingenious business move when it released ESPN NFL 2K5 at a price point of just $19.99, a $30 difference from that of Madden‘s. Successful sales of 2K5 significantly cut the profits of Madden, and as one EA Sports developer put it, “It scared the hell out of us.” So much so, that EA ensured that such competition never arose again. Firstly, Madden 2005 was price-cut from $50 to $30. EA then entered into an exclusive rights agreement with the NFL and NCAA, effectively preventing 2K from producing any further NFL or NCAA games. When the deal was completed and no competition was in sight, EA bumped the subsequent Madden 2006, the installment that EA themselves credit as being “the undisputed lemon of the franchise,” back up to a $50 price tag.

So if you’ve wondered how EA can produce yearly installments of sports games with little variation other than roster updates, this is why. And for your troubles, EA is willing to offer you $2. Just $3 more, and you’ll be able to slap that pre-order down on Madden 13.