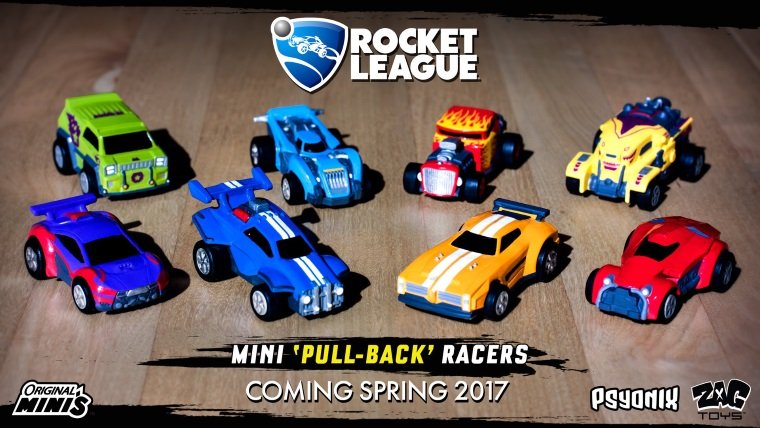 Zag Toys and Psyonix have announced a partnership that will produce officially sanctioned Rocket League toys that will begin releasing in Spring 2017 in the US. Twelve cars from the game will be replicated in a miniature form.

The press release reads “All toys will be based on in-game Battle-Cars from Rocket League, with the first cars to include Octane, Dominus, Masamune, Hotshot, Grog, X-Devil, Merc, and Backfire, as well as variant decorations to collect. Each toy will be housed in Rocket League’s iconic ball. Additionally, limited quantities of the toys will include a code for an exclusive Rocket Trail and Wheel that can be redeemed in-game, that can only be found in the Pull-Back Racers line.”

Some of the cars will even come with a special code to redeem in-game for items such as a Rocket Trail and wheels.

Of course, Rocket League now has far more than just these cars, so this could be a growing line if it becomes popular. The game certainly did, quickly becoming one of the biggest sellers of 2015 and continuing that trend through 2016. And it seems like Psyonix is preparing for success once again, saying that more toys will be announced through this partnership later on.

These could be more pull-back cars, of course, but they could also be something new. As a big fan of the game, I’d like to see bigger replicas of in-game objects. Being able to get a larger, possibly remote controlled Dominus would kind of make my Christmas. And if it was somewhat customizable, as the cars in the game are, then that’d just be perfect.

Rocket League has continued to maintain a steady and dedicated playerbase, so moving into merchandising makes a ton of sense. Expect more info about where to find these pull-back cars, and the price when we get closer to the Spring 2017 release date. Until then just keep playing Rocket League, and get ready for Season 4 later this year.