Pokemon Sun and Moon will have a New Surfing Raichu

The latest news in the world of video games at Attack of the Fanboy
August 10th, 2016 by Kyle Hanson 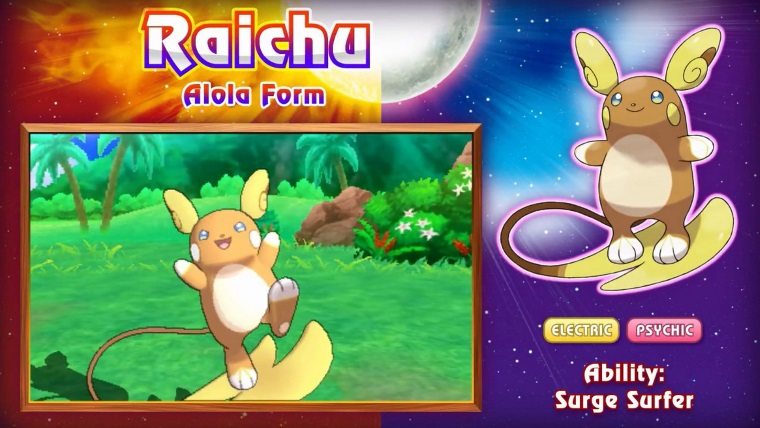 Pokemon Sun and Moon just keep getting huge revelations dropped for them. First we discovered that certain Pokemon would have special Alolan forms, making it so they appear and play differently from versions found in other games. Now we’re seeing the ramifications of this new mechanic, with brand new forms of classic Pokemon being revealed every few days. Today was a big one, with Pikachu’s evolved form Raichu getting a whole new look and feel.

Alolan form Raichu looks quite different, with new physical features all around. He also seems to like surfing, hovering in the air on his tail. His new ability mirrors this, called Surge Surf. This all seems to be a callback to previous elements from the series. Lt. Surge was a gym leader in many games and the anime, and in Pokemon Stadium his Raichu had the move Surf, which was illegal for all other forms of Raichu.

Raichu’s types have been altered as well, making him into a dual-type of Electric and Psychic. This should be an interesting and useful combo for trainers to try out. Pokemon Sun and Moon has definitely not shied away from trying out new things, including taking old favorites and messing with they types.