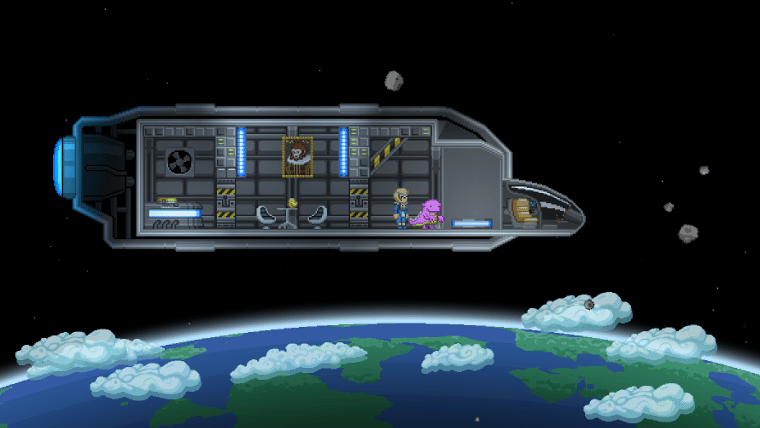 In the current Starbound beta, players are essentially let loose to bounce around the game world with very little direction. As we’ve been told, the current progression mechanic is temporary, existing as a placeholder while the devs work on their engine.

On Sunday, Starbound creator Tiy revealed the basis for player progression in the final game release. Due to the procedural generation of in-game planets, Starbound is able to contain a very large amount of them; in its current state, the galaxy map can be zoomed out to contain a dizzying amount of destinations–some more hospitable than others. In an effort to keep players oriented, Chucklefish is flat-out removing all the different universe sectors. In the final game, there will only be three sectors: Regular, PVP and a non-violent Creative.

“We want players to be able to advance through the game whilst doing whatever they enjoy most.”

Rather than using a single piece of tech to advance, players will need to upgrade their gear in order to visit planets otherwise inaccessible due to hazards. A planet with no atmosphere, for example, will require players to assemble a breathing apparatus. “Progression will be less linear and more akin to the kind of progression you find in modern metroidvanias,” Tiy explained in his latest blog post.

Starbound is being built with three main paths of progression in mind: farming, adventuring and building. At the beginning of the game, players will find themselves on a ship with a broken fuel module, and access to only one planet. Through a series of introductory quests, new explorers will learn the basics of farming, building settlements and finding trophies in dungeons. Through these quests, the necessary materials for a new fuel module will be obtained, and thus access to the next planet.

Another new feature, called the Outpost, will act as a neutral intermediary between planets and missions. It will be a safe haven for all races, where players can trade items, take quests, sell crops and even rent out houses in their settlements.

Starbound has been available in beta form on Steam since December 2013. An official release date for the game has not been announced.