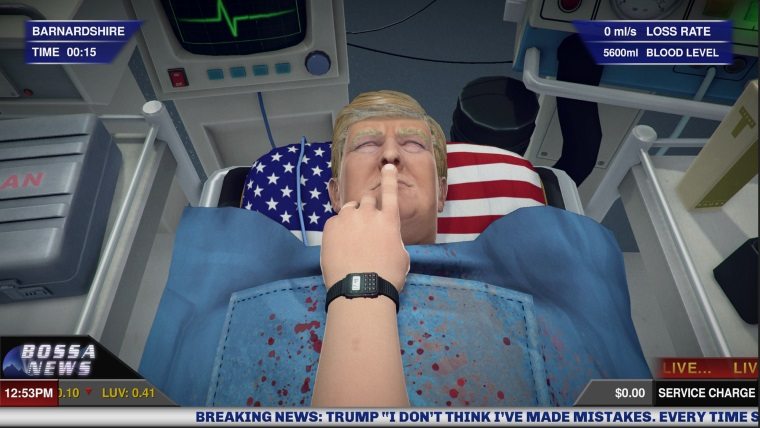 It’s election season, and everyone seems to be talking about one man: Donald Trump. Whether you love him or hate him, everyone has an opinion and everyone wants to share it with their friends, and the world. Now, a new Surgeon Simulator update is letting you go deep inside Donald Trump.

This isn’t just for fun, the developer is actually tracking information to see how gamers feel about Donal Trump. Playing the Inside Donald Trump update will feed info to Bossa Studios about whether you performed the transplant or not.

“All hearts given to Trump in successful transplants will be shown on a live tracker, with the #TrumpHeartGold or #TrumpStoneHeart results, potentially giving an early indication of how Trump may fare in the US election – at least in the eyes of the players, a very significant sample after all. The updated site will even display the total amount of dollars spent on Trump surgeries across the world.”

There are also gameplay changes, like new items such as Trump Vodka and Trump Steak. At the end of the surgery players will be given a bill for whatever items they used, fitting with some of the ideas behind Donald Trump and his candidacy.

The Inside Donald Trump update is free for all Surgeon Simulator Anniversary Edition owners, and those who need to upgrade from the original game can do so for a discounted price for a limited time.