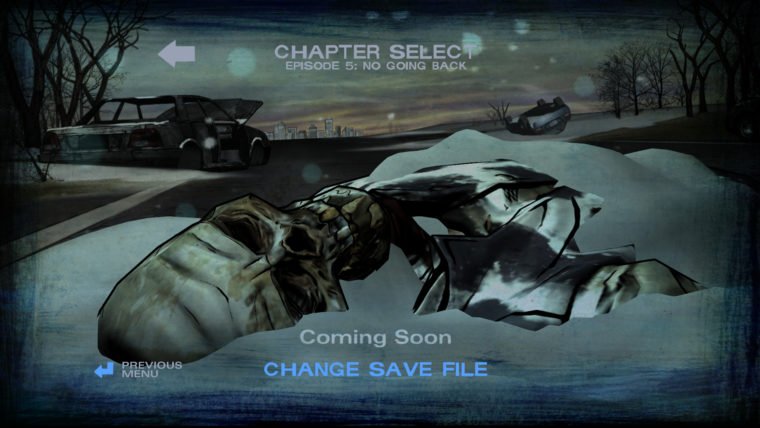 Telltale Games just released their “Accolades Trailer” for The Walking Dead Season 2: Episode 4 “Amid the Ruins”, showing off some of the heavy praise the episode received from critics. While the trailer is great and shows off what we all love about the series, fans will be more interested in the very small sneak peek at the season finale The Walking Dead Season 2: Episode 5 “No Going Back” that appears at the very end. Warning, spoilers for the entire series are contained throughout.

Starting at 1 minute and 18 seconds into the video we get a quick look at a snow covered location which appears to be a playground. Perhaps poor Clementine will get a chance to swing and slide for a little while…but probably not. Considering where this episode will pick up, right after the explosive cliffhanger from Episode 4, most likely Clementine will look longingly on the playground and continue being the zombie-killing badass she has become over these two seasons.

Personally, I think she will make it, though I’m not sure about any of her friends. We already had Telltale pull the protagonist death and substitution at the end of the first season so I doubt they will do it again with The Walking Dead Season 2. Also, watching Clementine learn and grow in the insanity that is her world has been the main draw for the series so far. We can’t just lose all of that progression and character growth. Of course, this is The Walking Dead so I have said that before and been wrong.

The Walking Dead Season 2: Episode 5 “No Going Back” should be out some time soon if Telltale’s previous releases are anything to go by. Most likely early September since we didn’t get the usual teaser image yet.