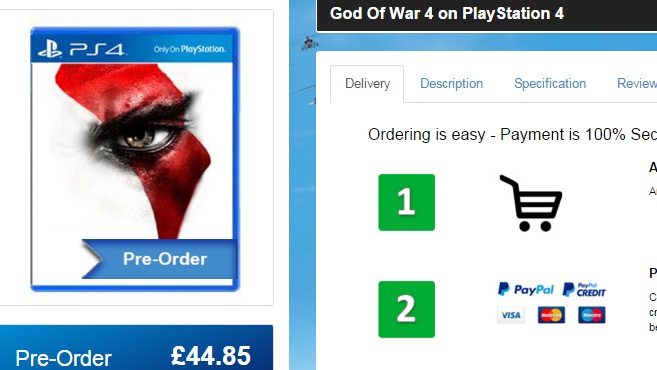 A UK retailer has now put up a listing for God of War 4 on PS4. Is this another sign for the game’s reveal later this week at the PlayStation Experience event?

UK retailer, SimplyGames, put up a listing for God of War 4 on PS4. You can actually pre-order the game now for £44.85. There is free delivery in the UK.

SimplyGames is not just a random retailer either. They have been named as the “Best Independent Online Retailer” at the MCV awards both in 2013 and 2014.

This might foreshadow what Sony Santa Monica teased on its Twitter page earlier this week. All it showed was a GIF of someone’s feet. Whether or not it’s related to God of War 4 or not is still unknown.

It will be interesting if Sony Santa Monica goes the Mass Effect Andromeda route and a new protagonist is introduced. It has been speculated that if a new God of War game is being made, Kratos might not be the main character this time around.

We can only wait until this weekend to see what Sony Santa Monica announces at the PlayStation Experience event. A lot of people would love to see God of War 4, but they could showcase something else for all we know.