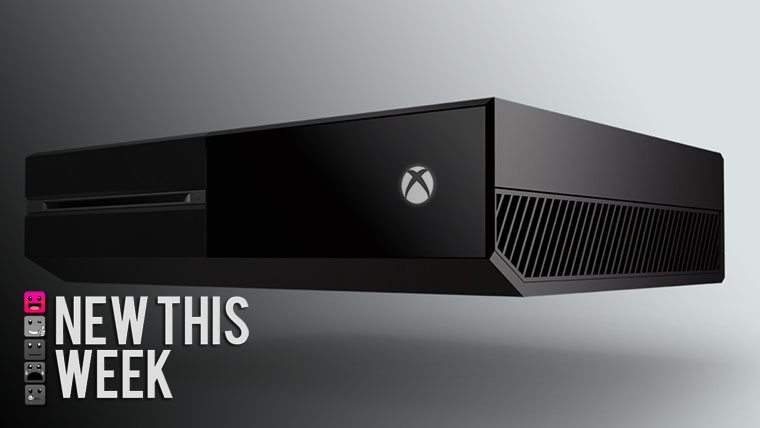 The Xbox One – Microsoft – Where the best games, multiplayer, and your favorite movies, music, sports and live TV come together in one place. Xbox One games look and feel incredibly real, with cinematic gameplay that rivals Hollywood. Watch TV or chat with friends on Skype while you play, and keep on playing while smarter matchmaking happens behind the scenes. With Xbox One, you can snap two things side-by-side on your TV, and switch from one to another instantly. Cloud-powered and built for the digital age, Xbox One is designed to keep getting better over time.

Assassin’s Creed 4: Black Flag – Xbox One – It is 1715. Pirates rule the Caribbean and have established a lawless pirate republic. Among these outlaws is a fearsome young captain named Edward Kenway. His exploits earn the respect of pirate legends like Blackbeard, but draw him into an ancient war that may destroy everything the pirates have built.

Crimson Dragon – Xbox One – Several generations have passed since the human colonists of Planet Draco lost contact with Earth, and they have reached an uneasy truce with the native dragons. Now they face the return of an old threat, a colossal destroyer known as the White Phantom. In “Crimson Dragon,” use Kinect to control your dragon and fight off the violent enemy life forms.

Need For Speed Rivals – Xbox One – Welcome to Redview County, where a street-racing rivalry between cops and racers never stops as both sides compete in an all-out war to take over the social, local and national media and earn the best cars, mods and technology. Risk Everything. Trust No One.

Zumba Fitness World Party – Xbox One – Only the premier global fitness brand can offer you an interactive experience so big it spans the Earth. For the first time ever, Zumba takes you on a cultural joyride around the world in Zumba Fitness World Party. Burn up to 1,000 calories per hour as you immerse yourself in the movement and music of exotic global destinations in this exhilarating at home workout that features a new visual presentation.

LEGO Marvel Super Heroes – Xbox One – LEGO Marvel Super Heroes features an original story crossing all the Marvel families. Players take control of Iron Man, Spider-Man, The Hulk, Captain America, Wolverine and many more Marvel characters as they try to stop Loki and a host of other Marvel villains from assembling a Super weapon which they could use to control the Earth. Players will chase down Comic Bricks as they travel across a LEGO New York and visit key locations from the Marvel universe such as Stark Tower, Asteroid M, an abandoned Hydra Base and the X-Mansion.

Just Dance 2014 – Xbox One – Just Dance 2014 – the sequel to Just Dance 4, the world’s #1 selling dance game – is bringing all new moves with breakthrough features for every motion-control platform and over 40 of the hottest tracks! Dance to current pop hits or celebrate with legendary classics – then take the fun to another level by playing with anyone anywhere in the world, leading back-up dancers, or creating customized Just Sweat experiences. Bring home the ultimate party starter and join in the fun!

Fighter Within – Xbox One – A gamepad cannot even scratch the surface of the true fighter within you. Expressing your inner fighter takes sweat, timing and training. Making full use of the XBOX ONE and the new generation of Kinect sensor’s exclusive technology, FIGHTER WITHIN is the only game that provides the excitement of real fighting competition and lets you earn your bragging rights over your friends by proving your brawling skills. FIGHTER WITHIN delivers the long awaited motion fighting promise, allowing players to throw punches and kicks in the most immersive competitive brawling experience.

FIFA 14 – Xbox One – Step on the pitch for EA Sports’ 2014 edition of this beautiful game. Experience the emotion of scoring great goals in FIFA 14. The game plays the way great football matches are contested, with innovations to the gameplay that inspire fans to build play through midfield, dictating the tempo of a match.

Battlefield 4 – Xbox One – Battlefield 4 is the genre-defining action blockbuster made from moments that blur the line between game and glory. Fueled by the next-generation power and fidelity of Frostbite 3, Battlefield 4 provides a visceral, dramatic experience unlike any other.

NBA Live 14 – Xbox One – Powered by EA SPORTS IGNITE NBA LIVE 14 delivers the ultimate on court control, combining the art of basketball with the science of next generation technology. bounceTek, fueled by next-gen visual fidelity and up to 8x the processing power, unlocks a revolutionary new, physics-based dribbling system. Players perform more like their real-life counterparts than ever before, informed by 70+ stats and tendencies, updated not monthly, weekly or daily, but within 1-hr of every NBA game. With fresh content and challenges on a daily basis, NBA LIVE 14 delivers the pulse of the NBA…24/7/365.

Dead Rising 3 – Xbox One – Dead Rising 3 puts you in the zombie-ravaged city of Los Perdidos, California. Do you have what it takes to escape before a military strike wipes out the entire city? As mysterious mechanic Nick Ramos, you’ll rely on improvised weapons to battle off the hordes of undead while you explore the massive open world.

Call of Duty: Ghosts – Xbox One – Call of Duty: Ghosts is an extraordinary step forward for one of the largest entertainment franchises of all-time. This new chapter in the Call of Duty franchise features a new dynamic where players are on the side of a crippled nation fighting not for freedom, or liberty, but simply to survive. Fueling this all new Call of Duty experience, the franchise’s new next-gen engine delivers stunning levels of immersion and performance, all while maintaining the speed and fluidity of 60 frames-per-second across all platforms.

Forza Motorsport 5 – Xbox One – Forza Motorsport 5 is a cinematic automotive journey starring the world’s greatest cars and tracks. Built from the ground up to take advantage of Xbox One and the vast power of the cloud, no game better delivers the wide-eyed thrill of racing.

Ryse: Son of Rome – Xbox One – Ryse: Son of Rome plunges you into the chaos and depravity of the late Roman Empire. Through the immersive realism made possible by Xbox One, it tells the story of Marius Titus who witnesses the murder of his family at the hands of barbarians. Seeking revenge, Marius must embark on a perilous journey of revenge, betrayal, and divine intervention. He joins the Roman army in Britannia and quickly rises through the ranks to become a General. As his war against the barbarians escalates, his quest unravels: to find his vengeance, he has to return to Rome. As Marius, you’ll engage in brutal combat and lead your forces into massive battles to save Rome from threats to its very existence.

Madden NFL 25 – Xbox One – Powered by EA SPORTS Ignite, Madden NFL 25 ushers in the next generation of sports games delivering ten times more detail than any game in the franchise’s 25 year history. Players think and anticipate in the trenches and across the field. Every step is calculated to showcase the most realistic player movement ever, and the emotion of Sunday is brought to life like never before with living sidelines, rich commentary, and thunderous crowds. Madden NFL 25 changes the game forever.

Zoo Tycoon – Xbox One – Let your imagination run wild with Zoo Tycoon on Xbox One! Build your dream zoo alone or with up to four of your friends on Xbox LIVE, choosing from over 100 visually stunning animals and the largest, most detailed selection of environments ever.

LocoCycle – Xbox One – The game will star “I.R.I.S.” (voiced by Lisa Foiles), a sentient motorcycle that looks similar to light cycles from the Tron franchise. It graduated from Big Arms Academy’s School of Assassination as valedictorian.  The bike can perform over 40 forms of combat and speaks 50 languages.  It can also travel a mile in 20 seconds (180 mph or 290 km/h), and can cloak.  I.R.I.S. is accompanied by a mechanic named Pablo (voiced by Freddy Rodriguez), who is dragged along behind her during the game’s events.

NBA 2K14 – Xbox One – NBA 2K14 marks the return of the world’s biggest and best NBA video game franchise. Following more than 38 Sports Game of the Year and “Best Of” mentions last year, 2K14 is set to rule the virtual hardwood once again. This year, 2K joins forces with the league’s most dominant force: LeBron James. With a soundtrack hand-picked by the King, refined controls featuring the new Pro Stick, new Signature Skills, enhanced defense including blocked dunks, and more, NBA 2K14 will raise the bar yet again.

Super Mario 3D World – Wii U – Leap into the first multiplayer Mario platformer set in a 3D world! Play as Mario, Luigi, Princess Peach, and Toad—each with their own special skills—in the all-new Sprixie Kingdom. Scamper up walls with the new cat power-up to find secrets or pounce from above to claw enemies. Enjoy a solo romp or add friends on the fly for instant Mario multiplayer* magic!

Mario Party: Island Tour – Nintendo 3DS – Face off against friends and family in an all-new Mario Party game for the Nintendo 3DS system. Connect up to 4 players* via local wireless and take on 7 new game boards, new modes, and 80 new minigames, all perfect for portable play.

The Legend of Zelda: A Link Between Worlds – Nintendo 3DS – Two worlds collide in an all-new adventure set in the world of Super NES classic The Legend of Zelda: A Link to the Past. In this newly spun tale, Link transforms into a living painting to cross into a dark, parallel dimension mirroring Hyrule. Conquer the puzzles, traps, and hidden rooms of deadly dungeons to save both worlds from certain doom!

Zumba Kids – Wii, Xbox 360 – Now kids can get moving and express themselves with the Zumba Kids game from the brand that pioneered “exercise in disguise.” The first extension of the best selling video game franchise, Zumba Kids is custom designed for kids aged 7 12 with fun routines, energizing music, engaging mini games and creative modes that encourage the entire family to join the party. Kids build self confidence and have a blast as they discover new rhythms in an interactive experience that makes them (and their parents) feel good as they stay fit.

Tearaway – PS Vita – In Tearaway you’ll journey through a vibrant, living papery world, with a plucky messenger who has a unique message to deliver – to you.  You’ll uncover a magical dimension inspired by folklore, and built realistically from paper that unfolds and comes alive before your very eyes. As you explore this world you’ll meet the papercraft creatures that live within it, help out strange new friends and encounter dangerous challenges.

Young Justice: Legacy – Wii, PlayStation 3, Xbox 360, Nintendo 3DS, Wii U – A renowned archaeologist, Dr. Helena Sandsmark, is kidnapped, and the Young Justice team tracks a group of the Light’s most notorious villains around the globe in an effort to rescue her. But when the young heroes discover the Light is exploiting Dr. Sandsmark’s expertise to locate fragments of an ancient statue of legendary power, they must race against time to save the planet from imminent disaster.