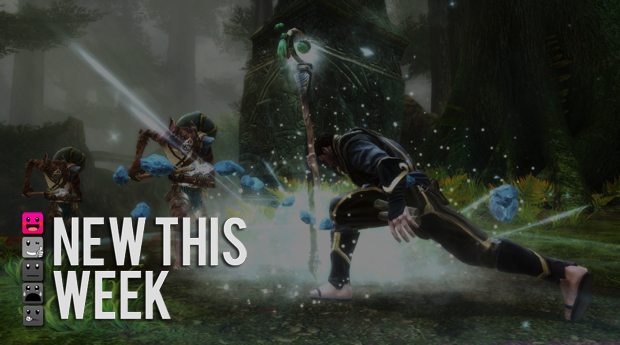 Here are your video game releases for the week of February 5th, 2012

Kingdoms of Amalur: Reckoning –  PC, PS3, Xbox 360 – Kingdoms of Amalur: Reckoning is a single player Action Role-playing Game (RPG) set in the brand-new game fantasy universe of Amalur. The game features an expansive Open World game environment, the unique “Destinies” system that limits character development only by the combination of equipped spells and items carried, intuitive yet challenging combat, a robust crafting system and a range of special attacks. Additional features include: the written and design talents of R.A. Salvatore, Todd McFarlane and Ken Rolston; dramatic special and metered attacks; as well as multiple in-game races.

Fallout New Vegas: Ultimate Edition – PC, PS3, Xbox 360  – Welcome Back to New Vegas!With the introduction of the Ultimate Edition, Bethesda Softworks offers you the chance to double-down and get the complete package of New Vegas fun. For the first time in one package, you can get all the Fallout: New Vegas content including the full suite of highly acclaimed add-on content: Dead Money, Honest Hearts, Old World Blues and Lonesome Road. To sweeten the pot, you’ll be armed with the latest cache of unique weapons, ammo types and recipes from the most recent add-on packs: Courier’s Stash and Gun Runners Arsenal.Whether you’re a seasoned explorer of the Mojave or playing the game for the first time, you’ll find there are more friends and enemies to make, more consequences to your actions and more opportunities to live in glory or infamy throughout the Wasteland. The choices you make will be as crucial to your survival as ever.Enjoy your stay.

Gotham City Imposters – PC, PS3, Xbox 360 – Gotham City Impostors is a multiplayer game unlike any other, giving players the opportunity to rebel against conformity as they customise their own characters. Posing as amateur vigilantes or villains, gamers will create their very own Bats and Jokerz characters using unprecedented customisation options including insane costumes, homebrewed gadgets and a wide range of traditional and imagined weapons. The game features maps and modes inspired by DC Comics’ Batman license.

Shank 2 – PC, PS3, Xbox 360 – The fan-favorite 2D brawler is back as ex-mob hit man Shank returns to action in Shank 2. With those closest to him under attack, Shank is once again forced on the offensive. Now he must put his trusty arsenal of handguns, shotguns, automatic weapons, chainsaws, machetes, grenades, plus all-new weaponry and moves to use in order to protect those close to him. The original game set a new standard for its visual style and Shank 2 raises the bar. Shank 2 expands on the original game’s amazing combat system to redefine the 2D side-scrolling brawler.

Forza Motorsport 4: February American Le Mans Series Pack – Xbox 360 – Forza Motorsport, the highest rated racing franchise of this generation, makes its return to the race track in Fall 2011 with Forza Motorsport 4. The definitive racing game of 2011, Forza Motorsport 4 brings together genre-defining, controller-based racing, the power and freedom of Kinect, and content from leading brands like Top Gear to create an automotive experience unlike anything before it.