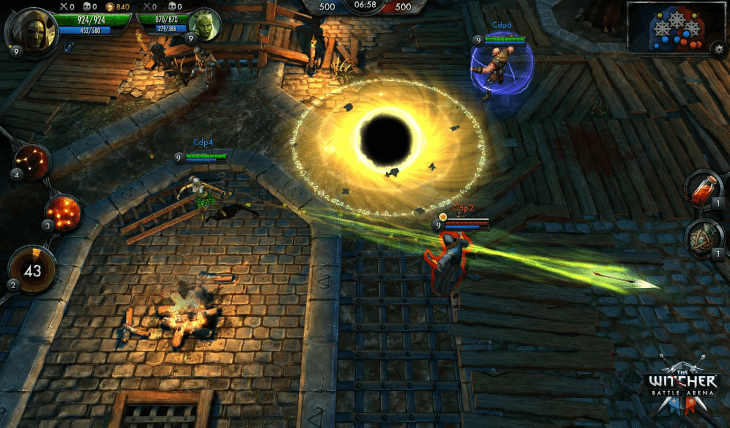 CD Projekt Red has announced The Witcher: Battle Arena which will be a free-to-play MOBA set in the universe of The Witcher series. The game will be available exclusively for mobile devices running Android, iOS, and Windows tablets and phones. The game is scheduled for release in the fourth quarter of 2014.

It won’t be a free-to-play, it will be a free game

Those other players will control characters from all corners of The Witcher universe. At launch there will be eight playable characters: “the Witcher Letho of Gulet, dwarven adventurer Zoltan Chivay, sorceress Philippa Eilhart, Eithne of Brokilon, The Operator, Golem, Saskia of Aedirn and Iorveth.”

Eurogamer had a chance to test the game out while at E3. They tried a 3v3 Conquest Mode where teams tried to take control of three pillars that were spread across the map. If one team controlled two or more pillars than the other team began losing points. Once a team reached zero points they lost.

As with any free title, the concern is how the economy will function and whether people will be able to pay their way to victory. Project manager Tadek Zielinski assured Eurogamer that “it won’t be a free-to-play, it will be a free game. A genuinely free game. You know we are fair with gamers. We are known for giving away stuff for free. We believe free is fair. So we wanted to realise our philosophy also with the MOBA game.”

There will be items and extra heroes in the game, but everything can be unlocked through normal play. If a player does not want to take the time to unlock it they are able to pay real money to unlock the item early. “You will mostly pay for saving time,” Zielinski said. “If you don’t want to farm for your hero you can buy him. And also there are vanity items you pay for. But there will be absolutely no pay to win elements in our game.”

Items will be priced in normal currency rather than some in-game money. This means you will not have the ability to purchase bundles of in-game money like many other free-to-play titles. Another shift is that The Witcher: Battle Arena features no timer, or other method of stopping the player. You will not have to pay money, or call out for a friend in order to keep playing the game.

CD Projekt Red decided to create the game as part of their plan to expand The Witcher’s universe. “The Witcher universe is vast. You are familiar with the term expanded universe. We have comic books, our board game, so this is another step in that direction. We actually want to grow and this is one of the ways we want to do it. We believe right now mobile devices are powerful enough to sustain our vision and let us realise what we would like to see on the small screen of the iPad or Android device. We are missing something on tablets. Mostly there are casual games. There’s not many games that are aiming for the more adult audience: somebody who is a gamer- not necessarily a hardcore gamer but somebody who likes to play serious games.”