The latest news in the world of video games at Attack of the Fanboy
April 17th, 2016 by Kyle Hanson 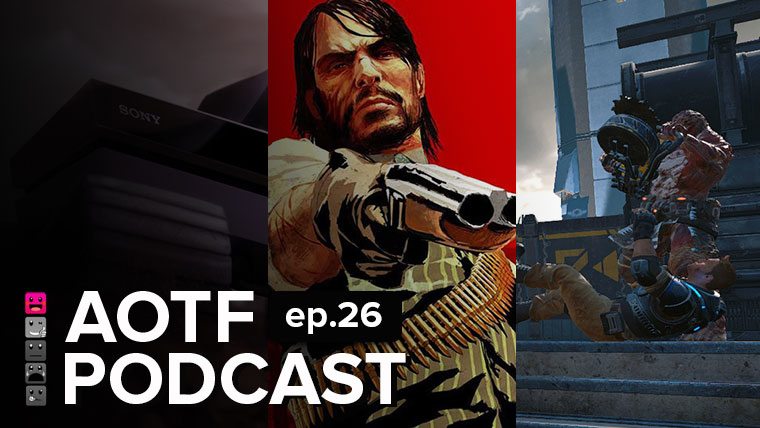 We’re back again, a bit quicker this time around, with AOTF Podcast #26. It’s been a definite slow news week, but that just means we can really dive into the few topics we have available. This includes the massive and growing Minecraft generation of gamers. With 10,000 copies sold every single day, the game is less a piece of entertainment, and more of a lifestyle at this point. Still, the average age of a Minecraft player was reported as 28-29 years old, which seems a bit odd based on some anecdotal info.

Along with this we have the now bi-weekly Red Dead Redemption 2 rumors. Luckily these ones were a bit more believable, showing off a possible map for the upcoming game, and reporting that it might be a prequel to the previous game in the series. With the ridiculous success of GTA V, and more specifically GTA Online, it only makes sense for Rockstar to move back in time, and not step on the good thing they have going with their main franchise.

On the sales front, the PS4 continues to dominate the NPD charts. We don’t have exact figures, but we do know that overall sales are down about 17% compared to last year. Still, the PS4 is on track to become one of the best selling consoles of all time, and has effectively demolished its competition for this generation. However, Microsoft seems to have given up on raw sales figures, and is instead reporting how much time players spend on their console. This paints a much better picture, with both Will and myself reporting huge amounts of time spent on our Xbox Ones, even if that time isn’t playing games, but instead using it as the living room entertainment hub.

In terms of what we played this week, the Gears of War 4 Beta is coming for all players very soon, with us getting some early access. I was not too impressed, though the early nature of the game makes its faults not all that worrying. There’s some visual issues, along with odd gameplay quirks, but overall the game is classic Gears of War action. They seem to have nailed the base, and some minor adjustments should push it to where it needs to be.

Meanwhile, Dark Souls 3 DLC is on the horizon, but Fallout 4 and The Division had some big DLC drop this week. The former wasn’t that impressive, though it was pretty cheap. Fallout 4 Workshop Wasteland seems to have just added a few pieces to the Workshop mode, and given you a Pokemon-esque animal taming mechanic. However, with no story pieces to tie it all together, and the systems not really presenting too much to enjoy, it has fallen a bit flat.

The Division on the other hand has soared, with its Falcon Lost Incursion DLC adding a very tough, challenging mission for those that are at the endgame. This new raid really shows where The Division is heading in the future, and it’s looking bright. Though reports of lingering glitches are troubling, so we’ll have to keep an eye on all of that.