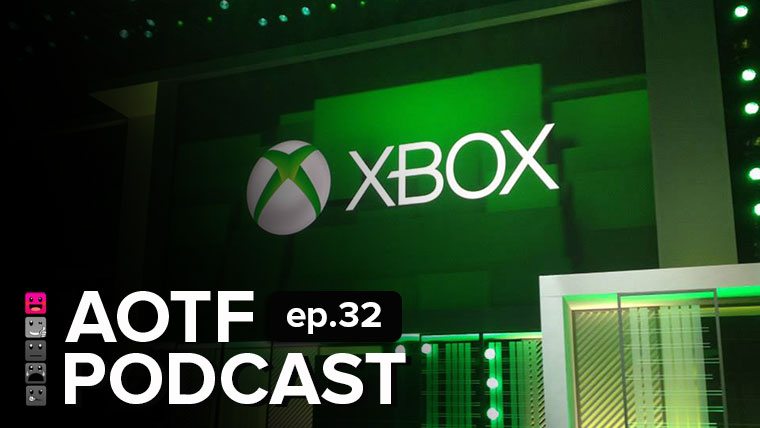 It’s time for AOTF Podcast #32, with Will and I discussing the gaming news of the week. I just wanted to go one week without having to discuss the possibility of new consoles arriving so soon after the introduction of the PS4 and Xbox One. That hope was dashed with Kotaku’s report that a slim Xbox One would be arriving this year and a totally upgraded model next. Supposedly this upgraded Xbox One would have 4K and Oculus Rift support.

I’m still just not wrapping my head around this massive shift in the console market, with it seemingly destroying many of the ideas that make consoles even worth buying in the first place. Will’s comparison to phones makes sense, and is probably exactly what Microsoft and Sony were thinking when they concocted this plan, but I’m not buying it. A phone is used for multiple hours every single day, while a gaming console is a luxury item. There’s a reason that tablet sales are tanking, and it’s because once you get outside of the $200 price range, people aren’t as willing to upgrade every single year.

On the PC side of things, the VR revolution continues chugging along, but its main star seems ready to explode, and not in a good way. The Oculus Rift launch was a disaster, I think few people can argue with that now, but the months that have followed have been a giant cluster. Misstep after misstep have led to the company’s most die hard customers turning completely against Oculus.

The problems seem to stem from the decision to break away from Steam and produce the standalone Oculus Home store. Here gamers can purchase VR titles for their new headset. It was an unfortunate choice, but made sense from a business perspective, with Oculus looking to take home a chunk of every game purchase. However, it locked out Vive owners from buying, until the Revive mod came along.

This mod has now been disabled though, with Oculus introducing new DRM to the equation. The developer worked fast and partial use is back, but only by circumventing the DRM, which actually opens up Oculus to a bigger piracy threat than if they had left well enough alone. Overall it seems like Oculus is trying desperately to set themselves up as a platform, ala PlayStation or Xbox. Gamers, however, argue that it is not a platform, but a peripheral. The idea of games being locked down to only work on certain brands of monitor, keyboard, or mouse is almost absurd, and this is how VR is looking at the moment.

While these were the big stories of the week, there were many more, including Oculus being called a tech thief by a Valve employee, Halo making its way to PC in a unique way, and Naughty Dog selling a ton of Uncharted 4 while looking forward to their next game. Hear all this news and our thoughts on it in AOTF Podcast #32.