The Men in Black, Mothmen, and relationships; what more could anyone want from a visual novel? 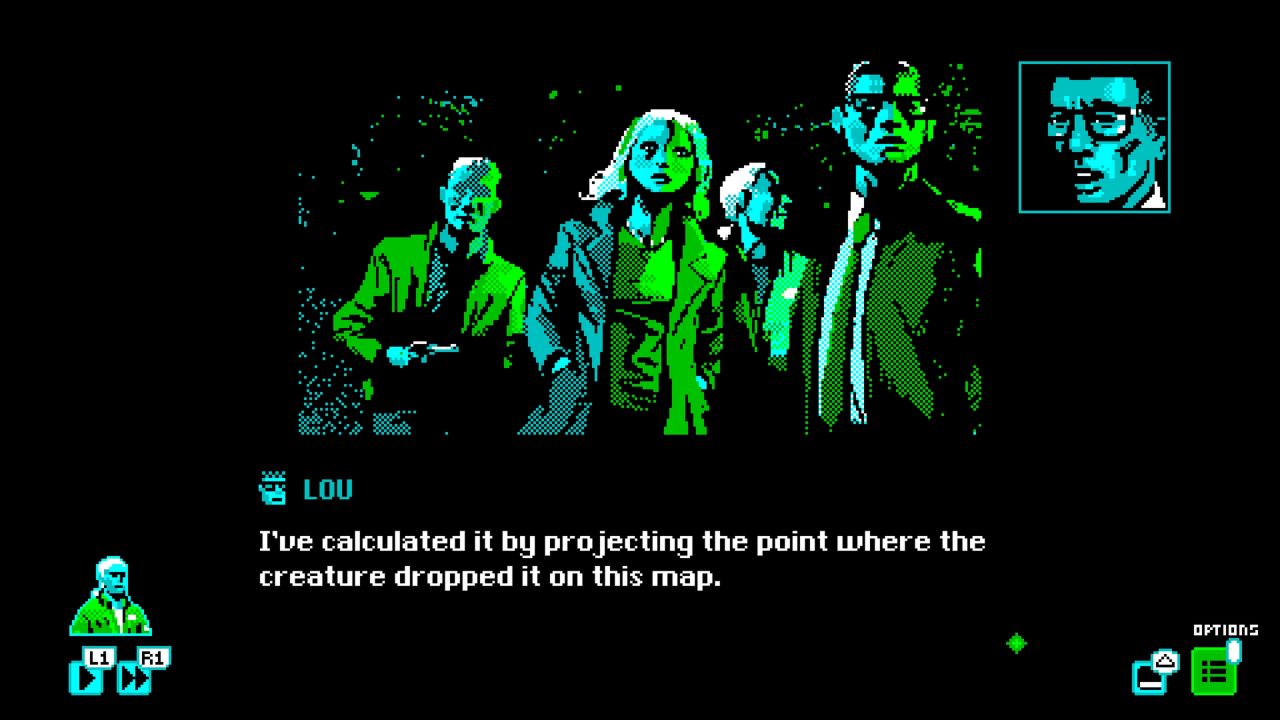 Mothmen 1966 is a Visual Novel game that intertwines enrapturing myths with engaging storytelling throughout the experience. A refreshing game that will have any readers among us happily enjoying all of the dialogue that is written to a great standard throughout the game. The Men in Black always prompt discussion amongst everyone in the world so does this game stack up to those discussions? Does the myth of the Mothman come to fruition in a successful way? This Mothmen 1966 review will tell you all of that and more.

First Impressions — The Men in Black are Back

Most people will be familiar with the Men in Black, who they are, and what they stand for from the legends and tales that go around the world. The prologue does an effective job of introducing the overall focus of the story and indeed, one of the main characters Holt. There are two other main characters, Victoria and Lee. Along with the side character of Lou. They all add to the story in their own ways. When seeing the Men in Black for the first time arrive on the screen, I was hooked on the story. There is something intrinsically mysterious about them that makes me want to learn more all the time.

The 80s Home Computer graphics take a bit of time to get used to but when you do it is a brilliant experience. A visual novel with this style really allows me to immerse myself in the dialogue which is easy to read along the bottom of the screen with a nice font style. In this generation, it is always excellent to see another visual novel game hit the marketplace as there is a lot of joy that can be gathered from them.

Along with the graphics, another component that immediately stood out to me was the mesmerizing sound flowing through the game. At first, the sound in the gas station/shop can be a little overbearing with slight buzzing in the background but nonetheless, over time it grew on me, and then the sound opens up more. There is brilliant music throughout which at points gives off Undertale vibes. The sound is also utilized effectively for some jumpscares which caught me greatly off-guard showcasing the brilliant usage of sound design. 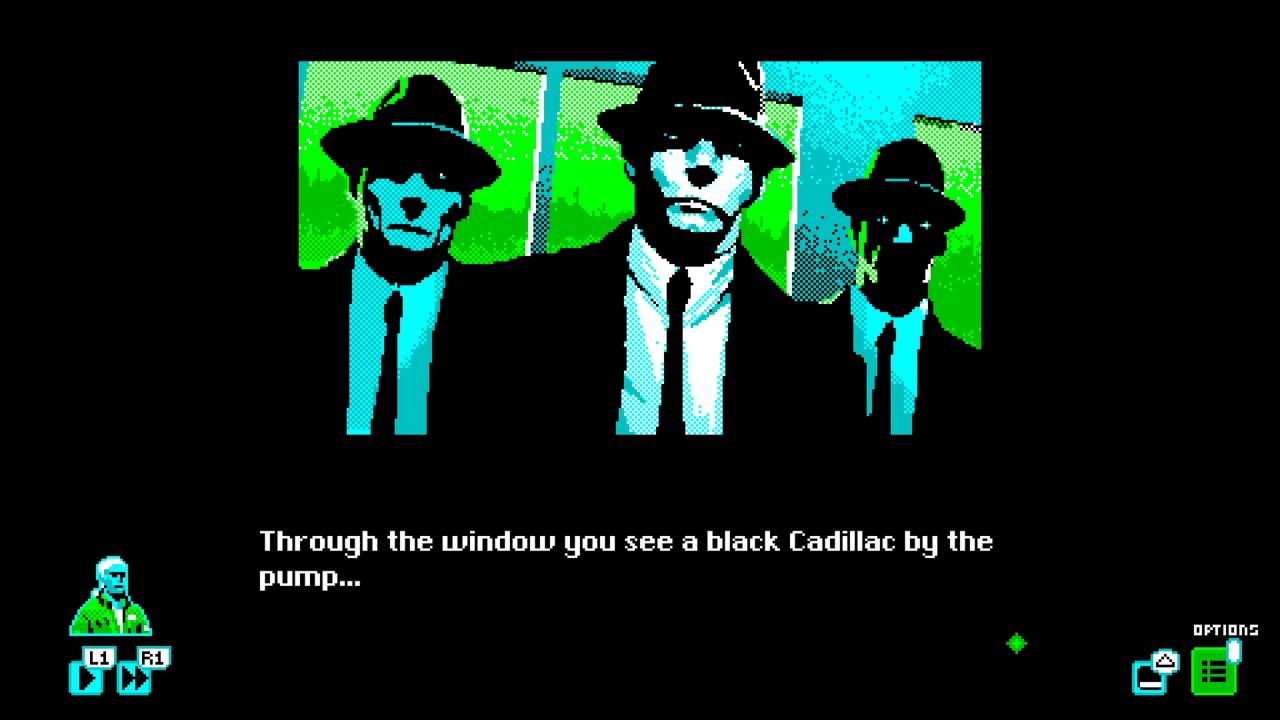 The Story — Characters to Remember, the Mothman Flows Through This World

The story is engaging enough that it kept me wanting to continue onwards throughout each chapter. For a visual novel, this is of vital importance that the story must enrapture players and Mothmen 1966 certainly did that for me. The story is spread out across ten chapters and each one varies in length. The overall story I would’ve liked to be just a bit longer as I felt some extra nuances could have been detailed and drawn out further, although overall it is a very solid story.

The relationship between Lee and Vic (Victoria) takes up a large chunk of the story and it is enjoyable watching these moments between the pair. There is an almost high-school drama feel to some parts of the relationship but it is still a brilliant part of the story. Holt and Lou are more focused on the strange occurrences around the area that are happening and with the Men in Black. Nonetheless, Vic and Lee also get involved in learning more about everything that is going on around the area and it is wonderful watching the characters interact with each other.

The main myth of the Mothman keeps the story flowing and it allows players to form their own opinions with each segment of the story in relation to the Mothman and the Men in Black as a whole. Ultimately, however, the pacing doesn’t stack up at points and the story feels a little jumbled at points. It is a brilliant story but at times it can have random moments and dialogue. My enjoyment of the game was still the same as it is an exceptionally unique experience, so even with that slight fault, I still enjoyed my time. 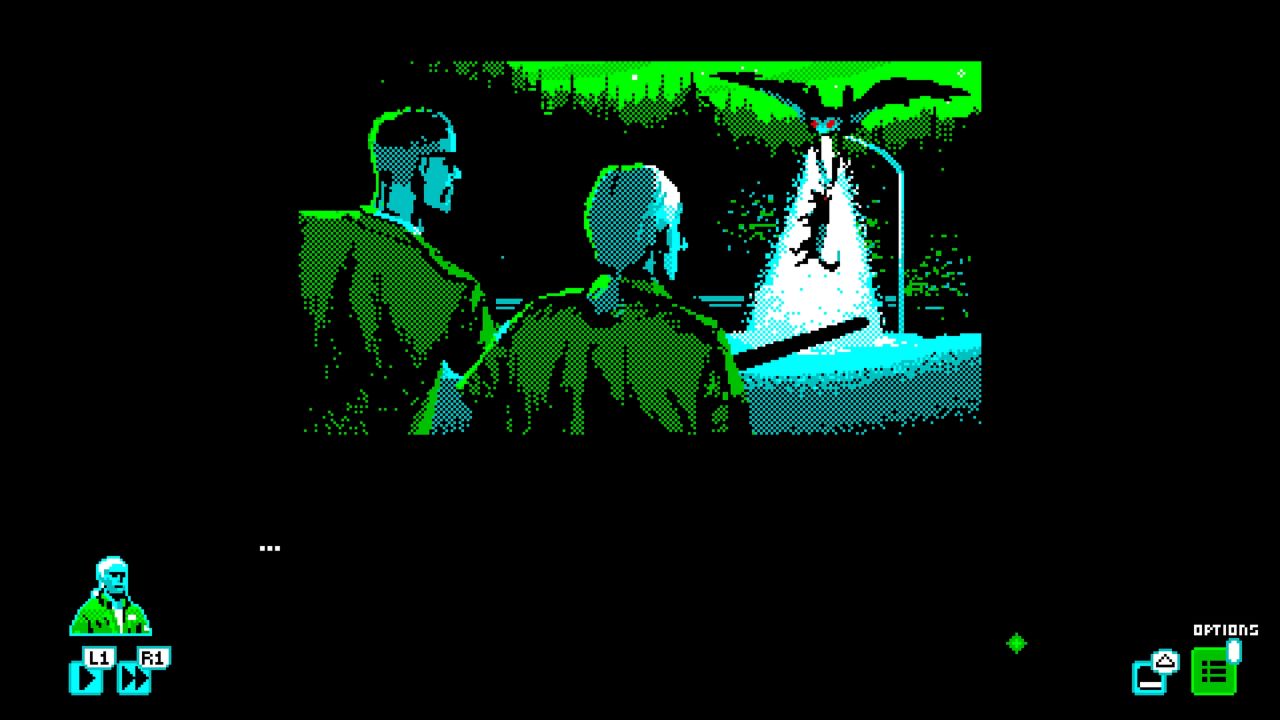 Mothmen 1966 has a lot of moments where you as the player will be able to take part in some puzzles and also get a chance to play a form of Solitaire. One of the first ‘puzzles’ you will have is stacking the shelves with Holt but in the following chapter is where you will get a much more enjoyable puzzle of keeping wolves away. This puzzle can unfortunately be confusing at first with the general location of where the wolves are in relation to the character and the directions you get. However, when you get the hang of it, the puzzle is enjoyable to play through.

Further in the story, you will be partaking in moments such as selecting options to make an accurate drawing of the Mothman with Vic and also other fun puzzles such as defending against waves of the mythical creatures that does involve problem-solving. It would have been nice to see more puzzles with action elements but for a visual novel; the puzzles included serve their purpose. 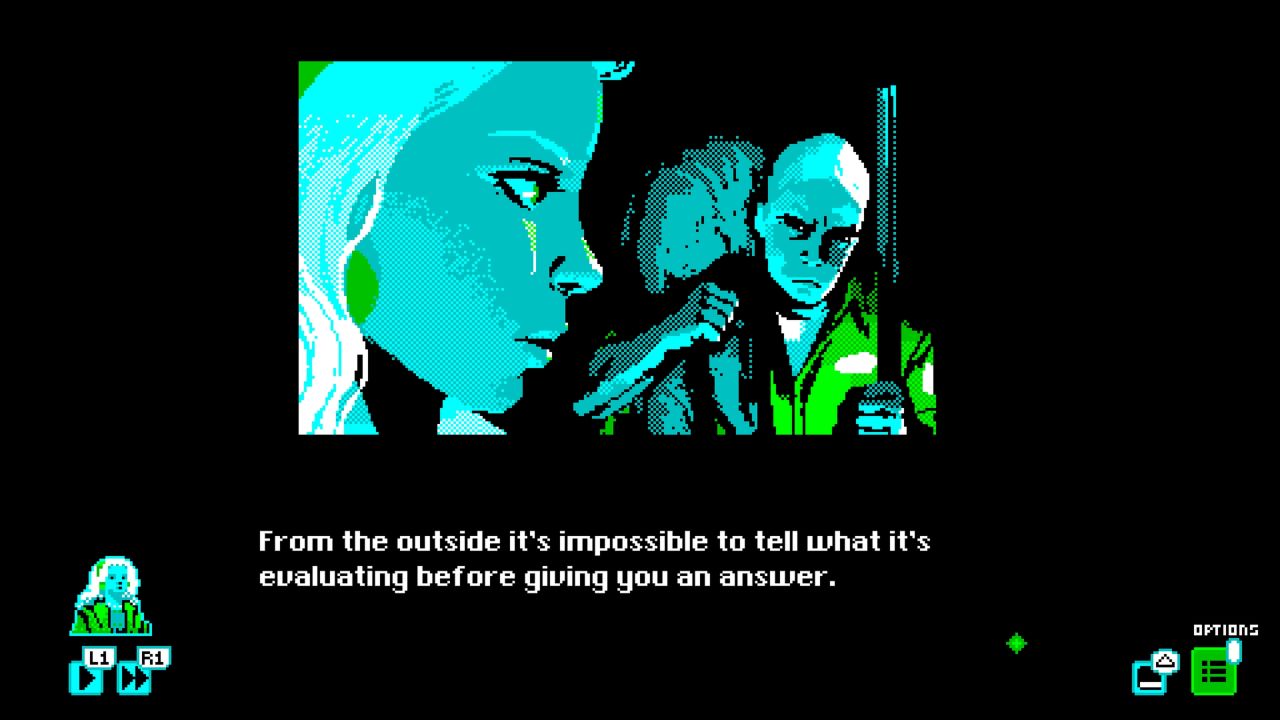 When looking at the game in terms of its accessibility, it has a few settings that will make the game more accessible for players who need extra help to have an enjoyable experience for them. The settings menu has accessible options such as ‘Message Speed’, and ‘Auto Delay’ to be adjusted by players. If you are looking for messages/dialogue to be slower then having the message speed option altered will greatly help you. However, apart from that, there aren’t too many accessibility options but the fact that these were considered and implemented is something that I respect the development team for including.

There is also a text log book that you can access within any chapter to view all of the previously said dialogue. This is a great feature for players who want to spend more time reading over certain parts of the story to understand it better.

Extra Inclusions That Would Have Been Great to Have

In terms of what could’ve been added for the game, there could be a Chapter Select as the main menu does not give this option. Instead, it mainly offers Solitaire when you unlock it and a Gallery to view what images and achievements you have unlocked. In turn, you will have to make sure that you are making use of the save and load system while playing if you want to return to chapters quickly.

The Men in Black also didn’t have a large number of moments in the story, there could’ve been a lot more focus put on them in one additional chapter perhaps. Or a Glossary/Character lore section on the main menu to give additional details about the organization and indeed certain terms mentioned throughout the game.

However, the game does also give access to exclusive demos of other visual novels from the main menu, one at the time of writing, which is nice to offer players as it allows more time spent in the game. 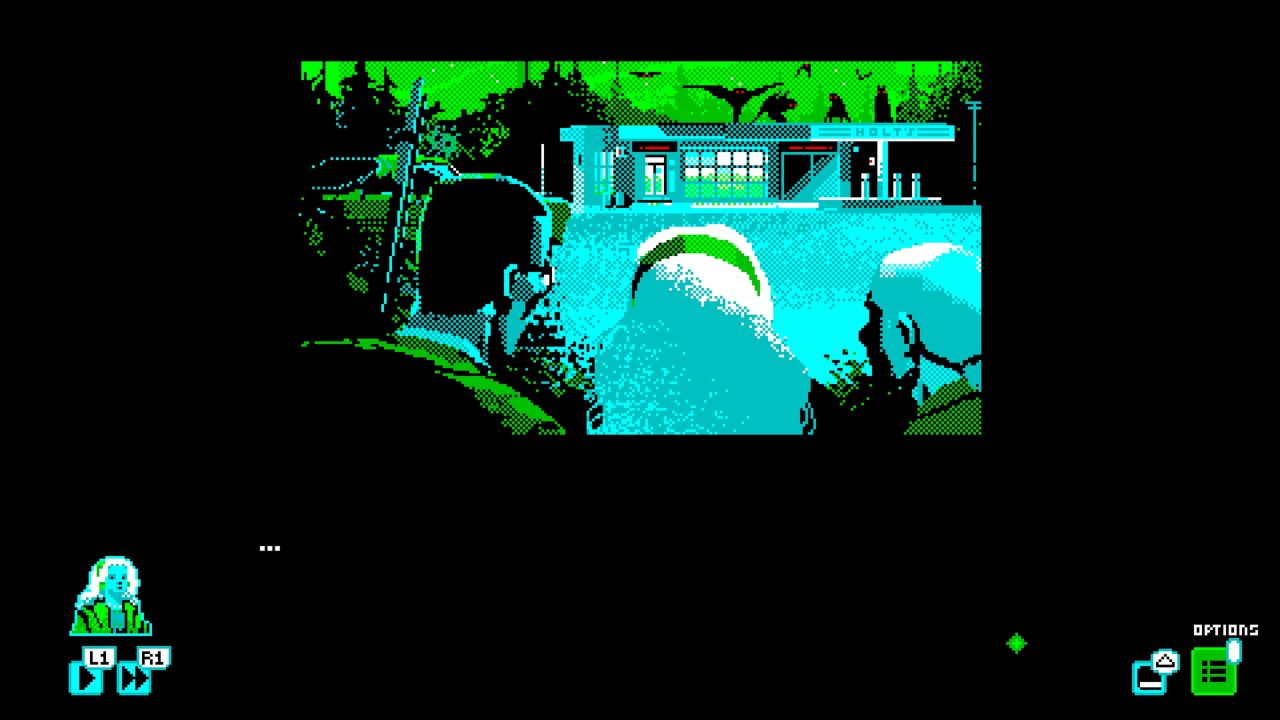 A unique experience that effortlessly creates an alluring atmosphere through its 80s Home Computer graphics that emphasize this to the highest echelons. I found myself hooked throughout thinking about both Mothman and the Men in Black. The puzzles made sure that there was something interesting within each chapter to have a further element of player interaction. There are multiple endings but unfortunately, there may not be too much replayability for people who want more content from the game after completing it.

All in all, LCB Game Studio has created not only just an excellent story but also a game that could start a movement for more visual novels in this ‘pixel pulp’ style to make their appearance in the near future. It’s not a game for everyone, but if you want myths and enjoyable dialogue fuelling your soul this Summer, Mothmen 1966 can be that experience for you.