Aliens: Fireteam Elite: How to Farm for Weapon Parts

Expand your weapon customization options by using these methods

One of the best aspects of Aliens: Fireteam Elite is the gunplay and the depth of customization when it comes down to the individual classes and arsenal loadouts. The team at FoxNext proudly boasts that this game has over 30 weapons and over 70 different attachments for the weapons in this game.

To many, this might seem like a bit of a grind. In this game, there are a few different ways to earn different weapon attachments which will then boost your character’s overall Combat Rating. Every mission in the game has a recommended Combat Rating which can be taken as a bit of a stat check.

Worry not, this guide will help you acquire a handful of attachments, even weapons because of similar means of getting them too.

How to Farm Weapon Parts in Aliens: Fireteam Elite

Weapons can perform increasingly better with more unique parts because these parts can do things like grant a player additional ammo, faster reload, better weapon stability, and so on.

Find the Hidden Cache in each mission Every mission in this game has a randomly placed Hidden Cache. They look very similar to the orange ammo crates spread throughout missions too. The only difference is that Hidden Caches tend to be off the beaten path.

I would advise going through areas you wouldn’t normally explore if you’re playing the objectives. Don’t just go to the next waypoint. Do some searching, look past some corridors that the game doesn’t really guide you to. You might even pick up some pieces of Intel along the way.

Hidden Caches don’t always spawn in the same areas either. They can spawn as early as the beginning of a mission to just before the last firefight. Keep on the lookout for them every time, they occasionally grant you some kind of weapon attachment like a sight for a gun. 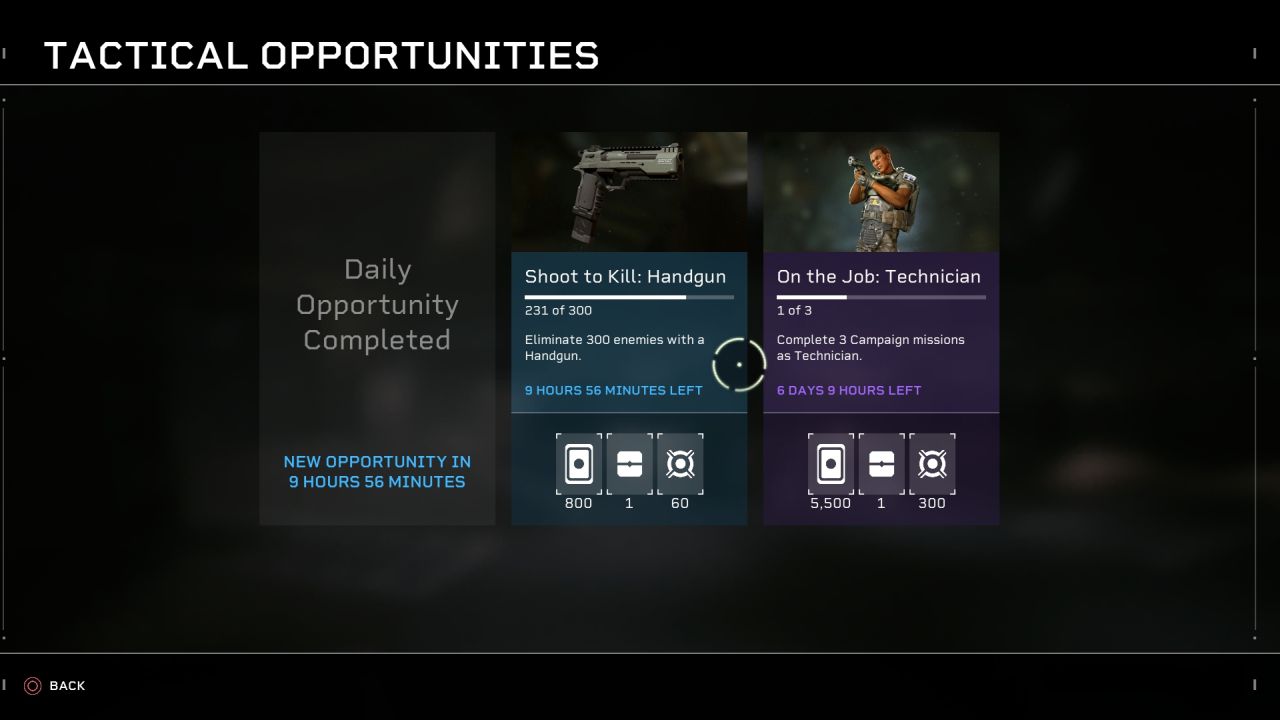 Tactical Opportunities are this game’s daily and weekly challenges. These opportunities would have challenges like “Eliminate (x number) of enemies with fire” or “Complete a mission from the Priority One campaign” or other campaigns.

These Daily and Weekly Opportunities are rather simple, though there can be more challenging ones like beat any mission on Intense or harder. Don’t fret if you miss some dailies or weeklies though, they reset and have very generous payouts.

Technically, this is a money farming method, but the Tactical Opportunities Packs are what makes seeking these challenges worth it. They both have a chance of granting you weapon attachments. 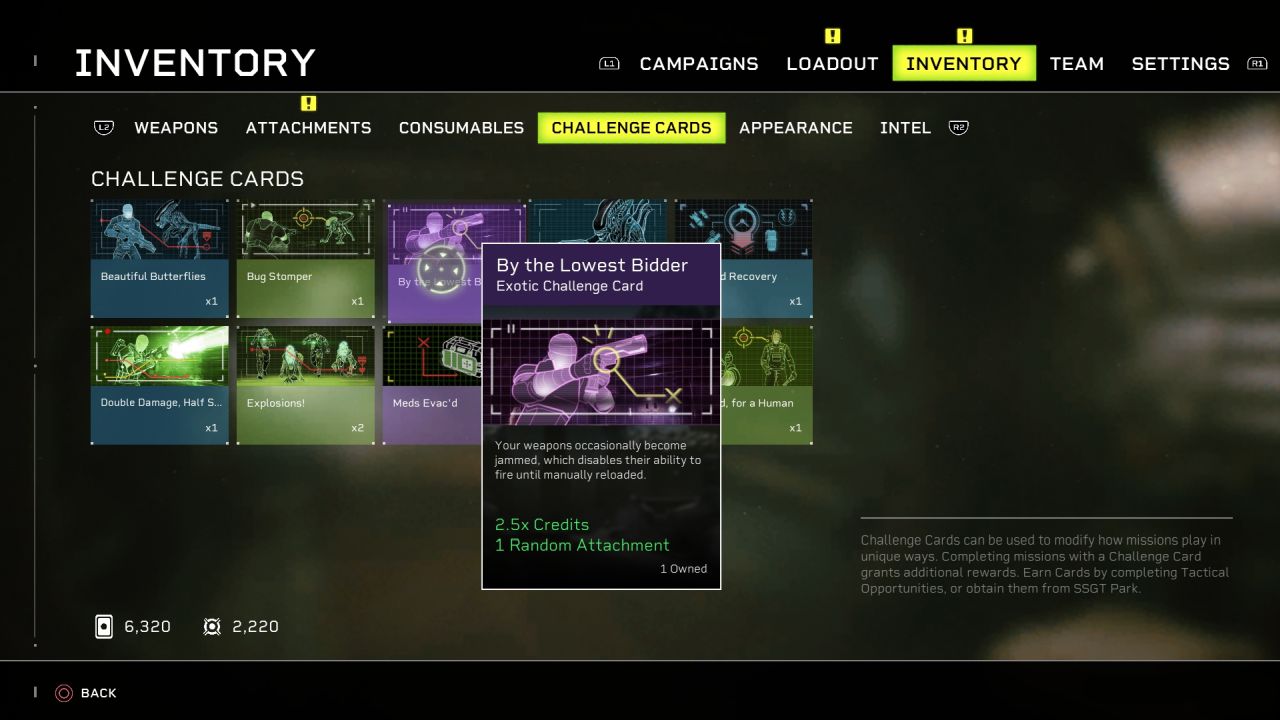 A challenge run in Aliens: Fireteam Elite is when you play a normal campaign mission with a difficult twist added on. Such challenges can include things like playing through an entire mission without a HUD or having doubled cooldown times for your abilities. Depending on the rarity of the card, the higher the stakes are, but also the greater the rewards.

Be on the lookout for cards that grant a multiplicative bonus to credits, or in my case in the screenshot, a random attachment. You can acquire additional Challenge Cards by completing the daily and weekly objectives as well as purchasing additional card packs from SSGT Park’s Special Stock in the Armory.

You’ll need to use Rep Scrip to buy the card packs from Park. Luckily this currency isn’t the same used for buying weapons, perks, and attachments. 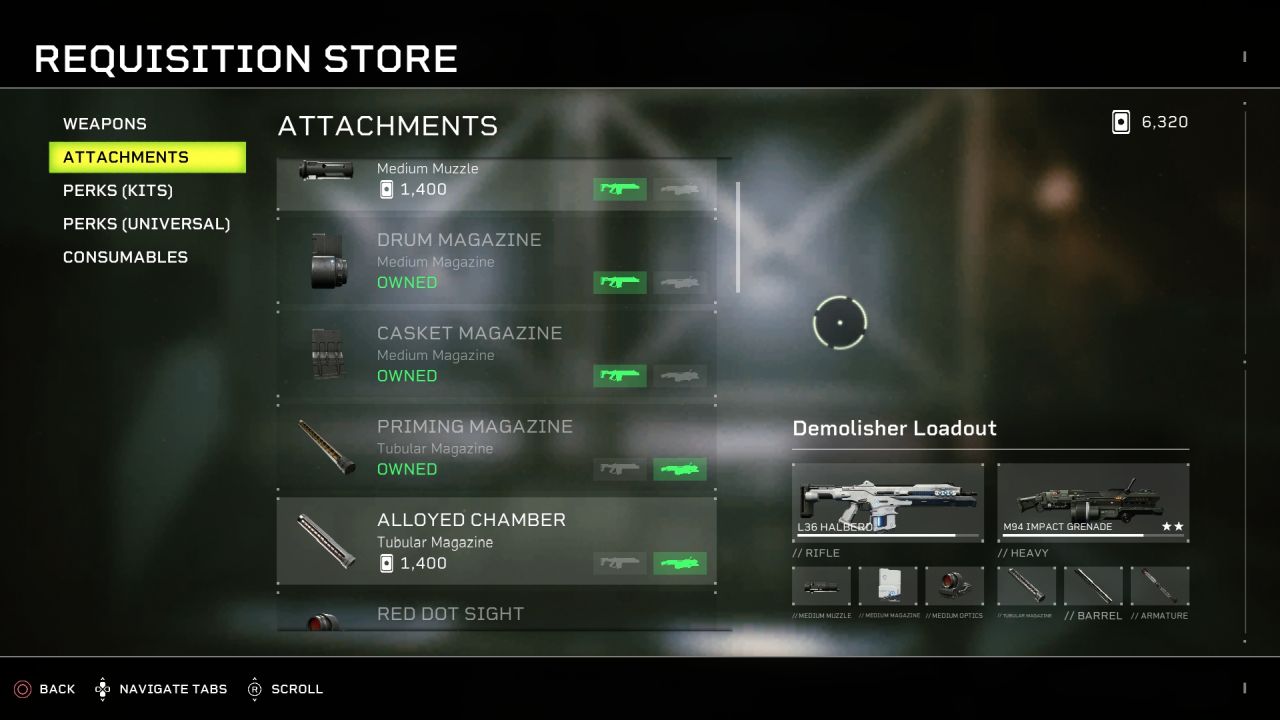 The reason I recommend that you earn additional attachments before new weapons is that the attachments are more universal to weapon classes. It’s best to stick with one weapon until it’s leveled until the 4-star rank, maxing out its innate perks. When you then switch to another weapon, it’ll have parts in reserve to give you a tactical advantage.

Aliens: Fireteam is out now for PlayStation 4 and 5, Xbox One and Series S/X, and PC via Steam. Check out more guides and our review of the game here.