A Spectral Battle of the Ages 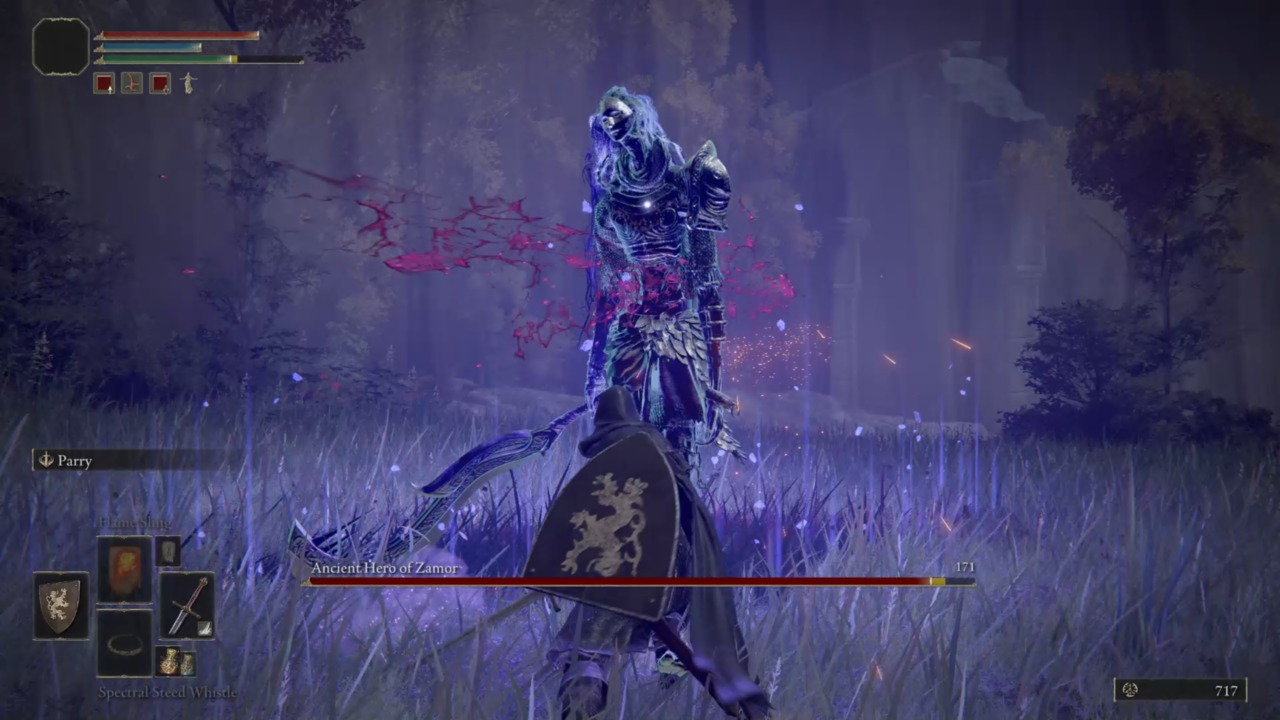 Ancient Hero of Zamor is a spectral frost warrior in Elden Ring that should not be trifled with. This boss will put new melee players to the test and may even provide a fresh challenge for sorcery main players.

You can find the Ancient Hero of Zamor in the Weeping Peninsula. Just East of the Church of Marika’s Site of Grace is a Weeping Evergaol. It is a stone circular rune with a gargoyle-like statue nearby. Go to the statue and present a Stonesword Key (You cannot commence the boss fight without a Stonesword Key). Afterward the center of the rune will light up purple and you will be able to transport yourself to the boss arena. 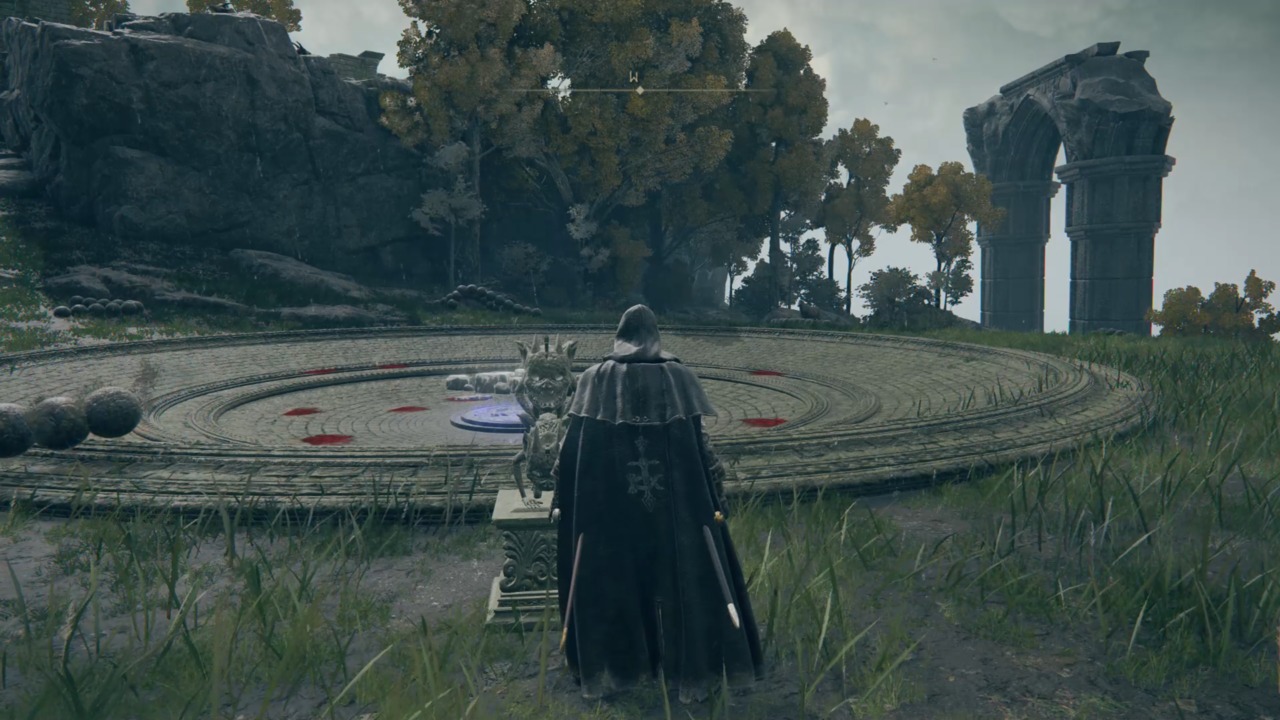 Once you have traveled to the boss arena you will see a purple light in the distance. Approach this light and the Ancient Hero of Zamor will appear. The Hero is a tall and slender boss who wields a large, curved sword. He will also use frost elemental attacks, but mostly in its second phase. The Ancient Hero of Zamor will go through two phases throughout the fight, switching when it’s about halfway through its life.

The fight starts off quite easy, it moves rather slowly and mostly uses spinning sword attacks in 1-2 hit combos, sometimes it will use an icy breath attack, make sure to move sideways to evade this as it creates a long stretch of frost on the ground. After this however, Ancient Hero Zamor will take a knee and summon more frost powers, beginning the second phase. 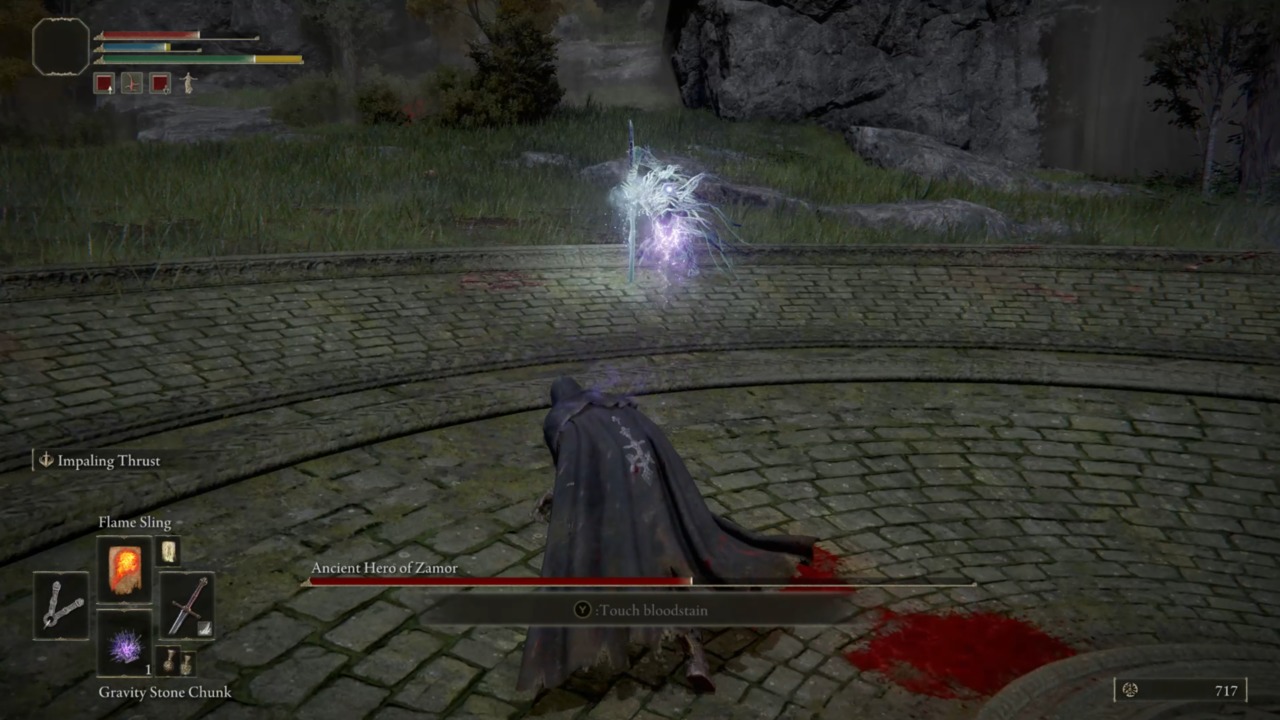 During its 2nd phase, it will cover itself in an icy aura and become much more aggressive. This part of the fight will become very difficult as all of his earlier combos will add extra moves to them. It will also be more difficult to rely on your shield as all of the attacks will be imbued with frost. It gains a couple of new moves, including a 3 hit combo, and a dashing lunge attack which leaves a row of ice behind it. 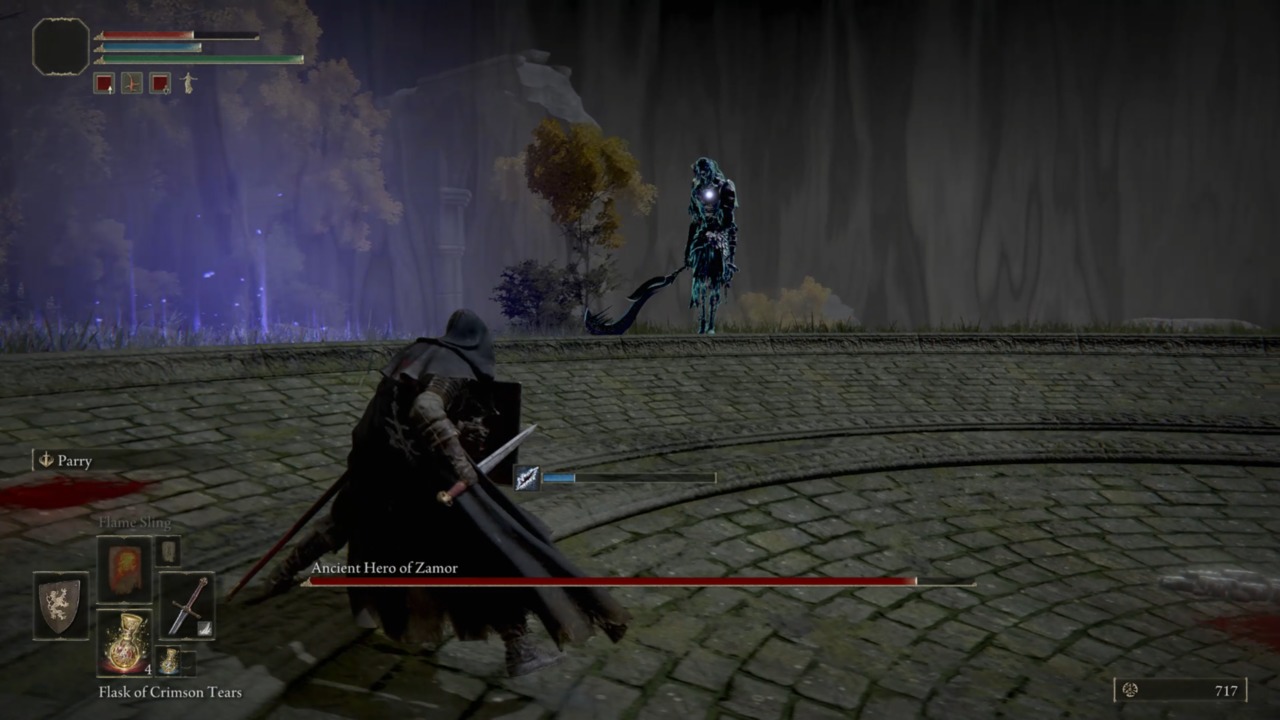 Taking on the Ancient Hero Zamor with melee-style combat is easy until it changes forms. After that the boss will rarely take a breather between its combos and you will find a difficult time landing your strikes. It is best to take on the boss with a combination of melee and magic but if this is not possible for your Tarnished then there are ways to win.

When the boss is first appearing, you will be able to get a solid 4 hits off before it is ready to start fighting you back. Take advantage of this and then go on the defensive, it is best if you can utilize a shield that has 100% physical damage block. If you do then hide behind the shield and then deliver some 1-2 strikes before repeating this.

When the Ancient Hero Zamor enters into its second form it will fall to one knee. Take this chance to land some free hits. When the boss gets back up it will always do a quick 360 swipe and then follow with a delayed lunge attack that will track you wherever you are. After the lunge it will hesitate for a bit, so take some more free hits before falling back. At this point it is best to simply dodge and back up constantly until you fully understand its combos and feel comfortable with sneaking a quick hit here and there. Repeat this until the boss is finished. 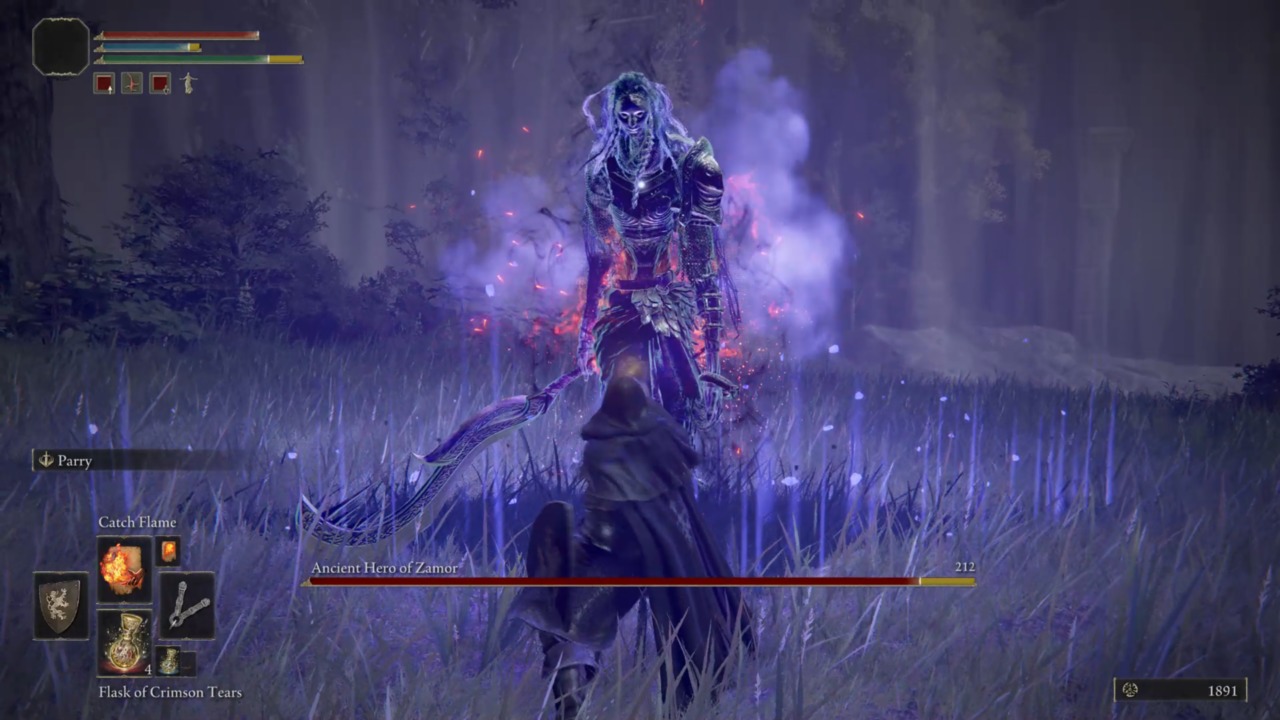 The boss is very weak to magic, fire magic, for example is very effective. It is very good at dodging long ranged magic especially if you are spamming your spells. The best strategy is to wait for it to be finishing a combo or fake it out with a nearby weapon strike and then cast magic. The Catch Flame spell actually was the most effective spell to dispatch Ancient Hero Zamor with.

Essentially, the same strategy for melee attacks should be used here with Catch Flame, but because Catch Flame does so much more damage (because Ancient Hero is weak to it) you will bring it down faster. Run up at the start of the fight and cast 5 Catch Flame spells, you may be cutting it close but if timed right you can dodge the incoming strike, and you will almost immediately be ready for the second phase. 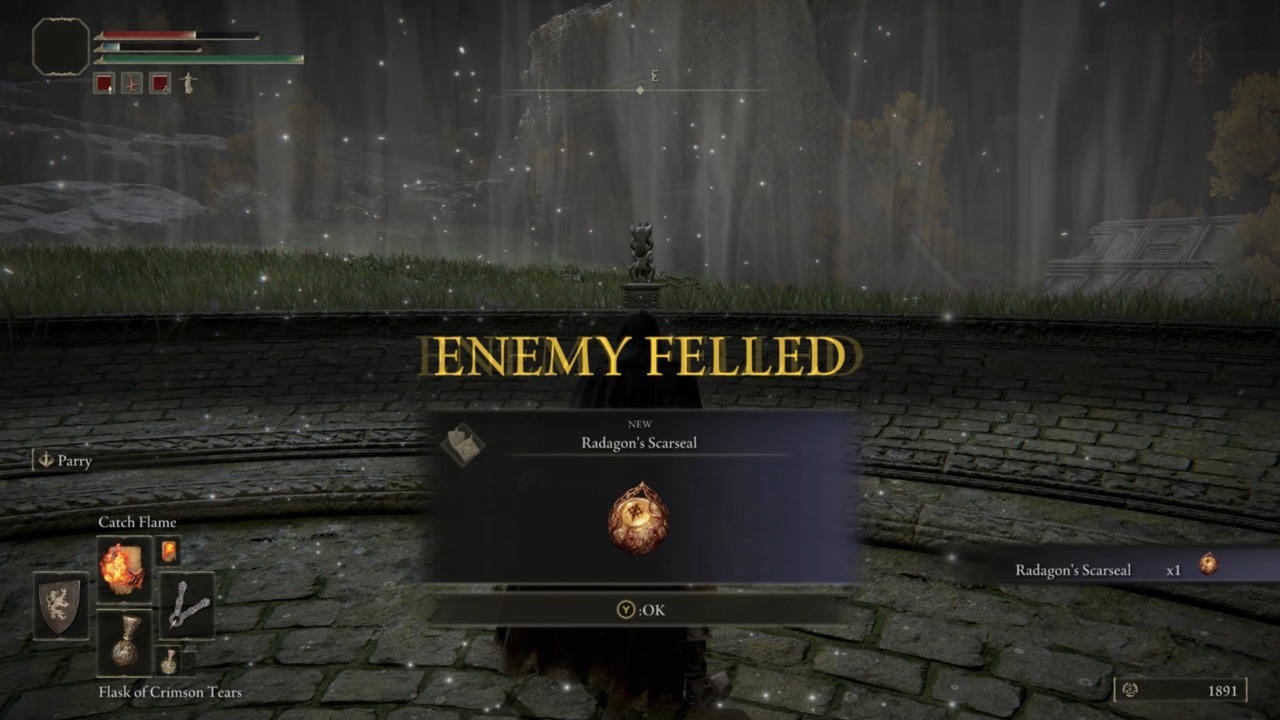 When the boss goes to a knee remember to take this chance to repeat how you started the fight. Now just dodge, cast, and repeat. After you fell the Ancient Hero Zamor, you can claim your prize: the Radagon’s Scarseal Talisman. This Talisman raises attributes, but also increases damage taken by the player.