Murder your foes easily with this setting enabled. 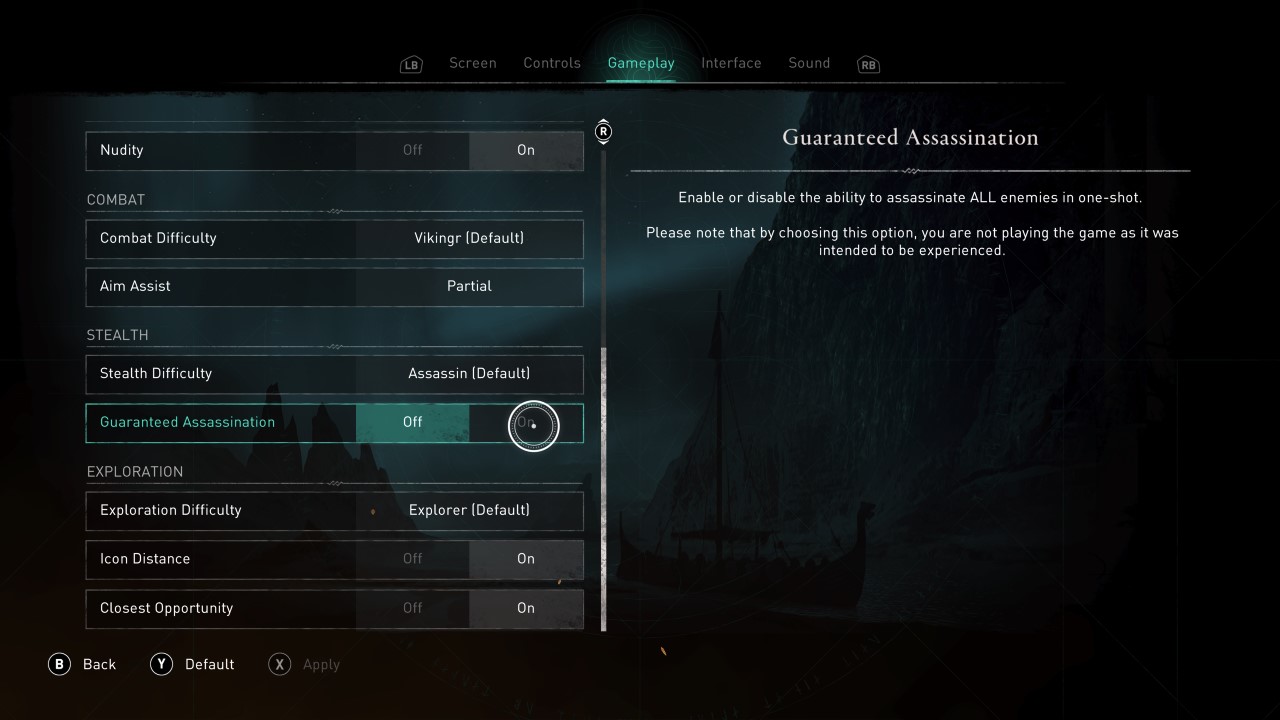 Assassin’s Creed Valhalla re-introduces a few old tricks for the stealthy players out there, but those eager for a more classic flavor can enable one-shot Guaranteed Assassination. This is different that the Advanced Assassination skill, which converts high-level assassinations into a quick-time event and requires some investment in the Raven portion of the skill tree. Instead, Guaranteed Assassination allows long-time fans of the Assassin’s Creed series a chance to relive the days before Origins turned the franchise into a massive open-world RPG.

One-shot Guaranteed Assassination is unlocked within the Gameplay menu, under Stealth.

The gameplay submenu within Assassin’s Creed Valhalla has a decent selection of options players can fiddle with, and quite a few of these are associated with the game’s difficulty. Combat, Stealth, and Exploration each have their own difficulty setting and a handful of more granular options that can be adjusted to get things just right.

One-shot Guaranteed Assassination is an on/off toggle underneath the Stealth difficulty setting, and can be set independently. This option makes it so all enemies in the game can be one-shot by an assassination attempt, no quick-time event required. Ubisoft does note within the setting this is not how they intend the game to be played (they really want you to spec into and build for stealth and assassination), but it’s a fine concession nonetheless.

With this option on Power Level doesn’t matter when you try and assassinate someone. You can effectively head into much harder territories and progress as a stealth oriented player, though you’ll still want to invest in some Raven skills and gear to maximize your efficiency. You may be able to kill anyone in a single hit with Guaranteed Assassination enabled in Assassin’s Creed Valhalla, but you will want some points in overall stealth to reduce detection. This option makes assassination into a one-shot strike, not all attacks, so if you’re spotted in a high-level area you’ll want to flee and re-establish stealth.