Assassin’s Creed Valhalla: How to Access the River Raids Mode 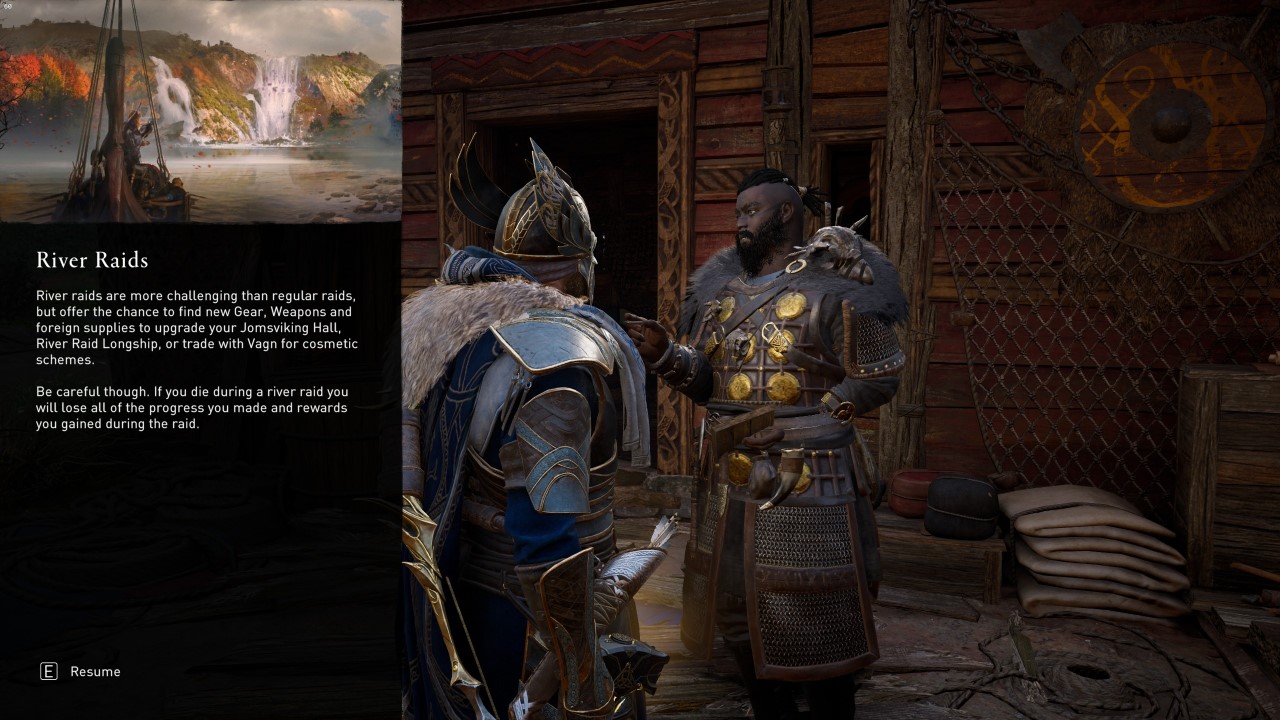 New content has traveled to the shores of Assassin’s Creed Valhalla in Title Update 1.1.2. The River Raids game mode is the free addition awaiting players next time they dive into Eivor’s adventure.

Eivor will need to adequately prepare before taking on what is essentially an increasingly difficult endurance mode. Players won’t be able to to get comfortable because the Suggested Power for River Raids missions always sits slightly ahead of the player Power level. Choose your gear wisely!

Assuming Eivor is kitted out with the finest armor, weapons, and runes, it’s time to test the Norse raider.

To get started, access the Quests tab. On the left side, there will be a new missions section titled River Raids. Track the first and only available mission, A River to Raid.

Eivor will be instructed to meet a group of new arrivals at the dock southeast of Ravensthorpe. After the short stroll, Eivor will come across Sunniva conversing with an unknown crew. Vagn introduces himself and presents a lucrative offer for Eivor to share in various riches embedded in areas previously unexplored by the Raven Clan.

Once the cinematic has concluded, the River Raid Dock will instantly be built and added to the Ravensthrope community. No materials are required for its construction.

All that is left is to sail with Vagn’s Jomsvikings on the introductory raid to familiarize Eivor with the activity. The concept is far from foreign to our protagonist.

There is more player-initiated management included in River Raids, so let’s review the new systems.

River Raids increases in difficulty as Eivor and fellow warriors pillage and plunder the locations lining the riverbanks. Completing a raid on one location raises the alert for all raid spots ahead, resulting in additional reinforcements. This is reflected by the river alert gauge, which can be viewed via the Quick Actions Wheel.

Eivor’s NPC pals are a bit more fragile in River Raids than they were in the main game. The health of Jomsviking health must be monitored, another piece of information that sits on the Quick Actions Wheel screen.

If a Jomsviking goes down, Eivor must reach them before their timer expires and use one ration to perform the revive. Big ration chests can mitigate some of the need to hover over allies. These chests distribute rations to both Eivor and every Jomsviking in the river raid crew. Should they find themselves nearing death’s door, the injured Jomsviking will automatically utilize their provisioned ration.

If neither Eivor’s manual assistance or stored rations are available to heal a downed Jomsviking, the member will return to Ravensthorpe to recover. The result is a double blow to the group. In the short-term, the remainder of that particular River Raids run is now going to be even more difficult operating with one less friendly combatant. Furthermore, the affected Jomsviking will remain unavailable for several more raids.

Be sure to recruit Jomsvikings from the newly added Jomsviking Hall, a structure that can be constructed after the first River Raids mission. Keep in mind that the bell outside of the hall can be rung to refresh the Jomsvikings standing inside.

The wealth of resources scoured throughout the core game are of no interest to Eivor here. Foreign Cargo Chests are the new goal. The resource can be found at Military and Monestary River Raids locations. The supplies can be used to upgrade Jomsviking Hall and the River Raids Longship (separate from the Raven Clan’s main vessel), as well as traded with Vagn for new items.

Eivor can’t simply load up an endless supply of Foreign Cargo Chests, regardless of the player’s battle competency. The River Raids Longship has limited cargo space. The mode begins with a 200 supply limit. This can be upgraded later, but remain mindful of the restriction so that additional raid locations aren’t assaulted in vain.

Know When to Leave

Whether Eivor has lost too many Jomsvikings or the longship is at its supply capacity, there are multiple reasons to call it a day and return to Ravensthorpe. Pushing ahead unnecessarily could result in death and the penalty for failure is the complete loss of gained rewards on that run. To leave a river raid, open the Quick Actions Wheel and select the camp’s icon to depart.

With all of that in mind, you are now ready to venture out into unknown waters in search of treasures.