This boss battle in Batman: Arkham Knight isn’t really a fight, but more of a challenge that makes use of your stealth skills. If you’re not good at stealth, we’re here to help.

Your main goal in this part of the game is to be directly underneath the Arkham Knight. Batman himself will tell you he cannot grapple from gargoyle to gargoyle like normal. You need to walk or run on the ground to go beneath him like pictured above.

The first stage of this boss battle is pretty easy. The Arkham Knight is just perched on top of the gargoyle with no guards around. He’s perched close to where Commissioner Gordon is tied up. Just avoid getting detected by his red field of vision. Literally just running up underneath the gargoyle works here. Arkham Knight moves to another position perched on top of a gargoyle again. Much like before, try and avoid his field of vision. His red laser sight should be avoided at all times because he takes a chunk of your life when he shoots you.

This stage of the fight is a bit more difficult because a security drone is flying around. You can disable it temporarily by using Batman’s hacking device. After you do that, you can drop down and get rid of the enemies. 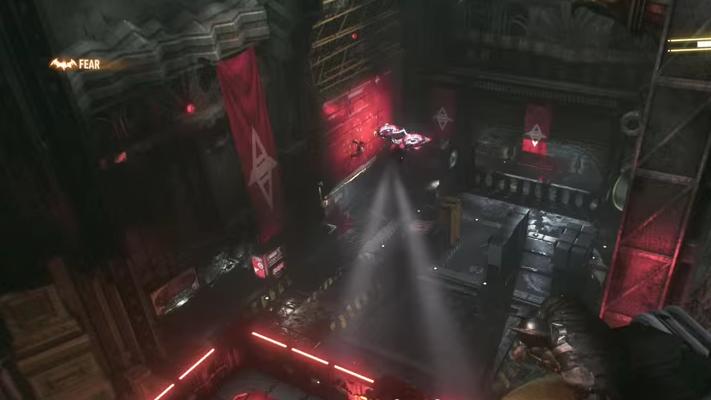 You also need to avoid using your Detective Mode too. There’s a guard that knows you are using it. You can take him out first if you really want to use it. If you are good at combat, you can actually just beat up all of the enemies head-on during this phase. They’re not hard and the drone and Arkham Knight aren’t usually around.

Again, Arkham Knight is on the top side of the room pointing his sniper rifle at the ground. He’s much higher than where he was before. If you’ve managed to knock out every enemy, you’re safe to proceed. Or you could just run up underneath the Arkham Knight if you don’t mind taking a few hits from some bullets.

You can just climb up and go underneath the Arkham Knight’s gargoyle. After you grapple on, Batman will have another scuffle with him, and the Arkham Knight runs away yet again. Before you can get your bearings, Arkham Knight has poisoned the room with gas. Just grapple onto the vent which is in front of you and you should escape. This picture gives you an idea on what you are up against. It’s similar to Phase 2 in a lot of ways. There’s Arkham Knight at the top of the room again looking down and another security drone. You can disable the security drone temporarily using the hacking device.

You could do things the long way and do the usual stealth techniques. Although you can just swoop down and beat them up while the Arkham Knight is not looking. Just remember to disable the drone before you beat them up. These guys aren’t hard to take down. Just use smoke pellets if the shotguns are hurting you too much.

Once again, Arkham Knight is oblivious to see you walking down and grappling underneath him. There aren’t many things guarding him so you can literally just run to his position again like before. As you can see from the screenshot above, this phase is more difficult than the other. Arkham Knight is surrounded by a security drone and two turret guns.

The trick here is to disable the security drone with the hacking device first. After that, swoop down and wait until one of the turrets have rotated so that you can get behind it.

Before you swoop down, crouch behind the boxes and wait for the turret’s lights to not see you. You want to avoid their field of vision or else they will start killing you. They take a lot of life out of you, so try not to get shot.

The boxes in this area should provide with enough cover to just walk past the turrets unseen. After that, all you have to do is grapple on a gargoyle and then that’s the end of that boss battle.