Bravely Default 2: How to Beat Folie

Art can be deadly. If you ever wondered what goes into the mind of an artist, look no further than Folie, the Pictomancer Asterisk holder in Bravely Default 2. This little girl has a sad past, but even this doesn’t justify her psychotic actions that unfold during Chapter 2, as she is the one responsible for brainwashing the rest of the group in Wiswald. After bringing everyone together though, it is time to put an end to her artistic urges.

How to beat Folie the Pictomancer

As you start the fight, you notice Folie having two pets with her, a Golem and a giant turtle. In contrast to the previous fights with extra enemies that you had in this Chapter, especially Galahad’s horder of Picto Demons, these are really nothing to worry about, but what’s more interesting is the creepy wall behind her. As a piece of art of her own, this painting is really deadly if you let it unchecked.

First things first, get rid of the two goons, the golem and the turtle. They are both weak to the Water element and Axes and Spears respectively, so Berserker’s Water Damage does wonders with these ones or the Longinus Spear, if you have it. No real strategy here, just hit them until dead and heal while you are at it.

With them gone, Folie is a straightforward fight, although tough and tricky to handle, due to her counters. As she can counter White Magic, you can’t rely on a White Mage for healing the party constantly. Therefore, having a Red Mage in the team in extremely valuable, or using Beastmaster’s Undine. 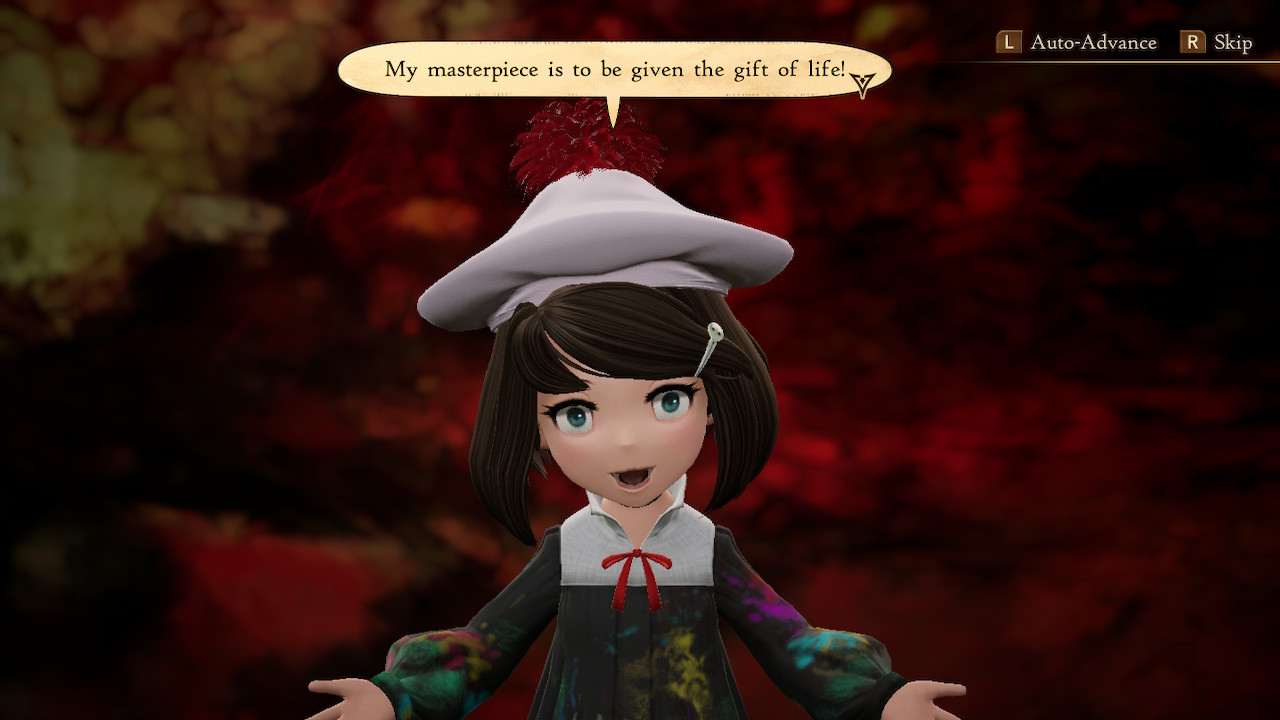 As long as you keep chipping away her health, and use your heals whenever time is right, Folie will eventually go down. Don’t try to stock up on BP, as there is no need due to her combined attacks with the wall. Instead, use hard hitting attacks on each turn, like Thief’s Godspeed Strike or Berserker’s Amped Strike and Level Slash. As it is not advised to bring a Black Mage because of her counters, you won’t be relying on any Magic damage. Therefore, using the 4th member of the party to refill your damager dealers’ MP with Mini Ether and Ether is highly suggested. As such, a good setup would be:

Lastly, only time you need to watch out for a team wipe, would be when the Mural uses its abilities in conjunction with Folie. Have your healer ready if that time comes. In any case, after winning the fight, you are now owner of the Pictomancer Asterisk, enabling you to express your artistic side the same way as Folie. Hopefully, it wont be that deadly.