Bow and arrows in their hands, slaying enemies is their task. The Ranger Job in Bravely Default 2 is a very straightforward one. Kill, or be killed. The purpose of our Ranger guide here is to show you the Job’s most important aspects, alongside an overview of its utility and what else it brings to the table. While it’s not a significant offensive presence, even if it mostly is a damage-type Job, its most valuable assets are its passives. Let’s take a look.

The whole kit of a Ranger is focused around dealing damage to specified enemy types. His ‘slayer’ abilities target enemy types, in order to deal increased damage. Almost all of them are of a low MP cost, which means you can literally spam them at each round, providing good and constant damage per turn. 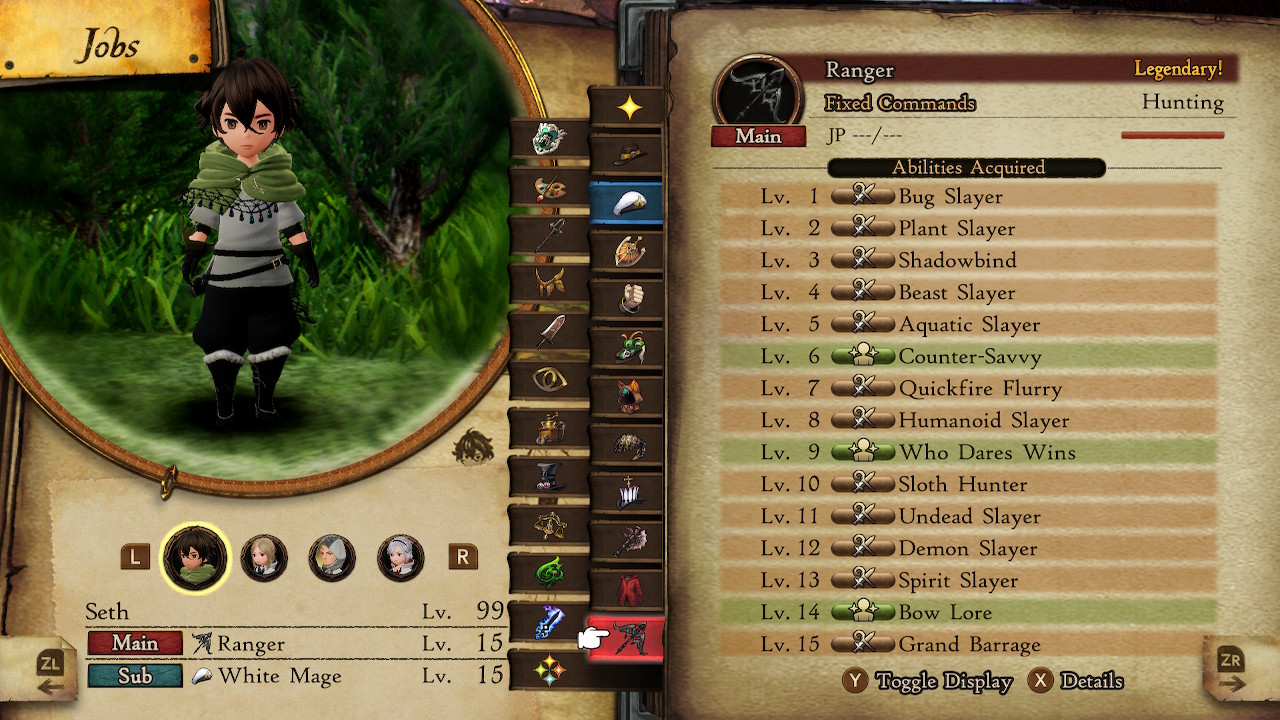 Right away, you can see what Ranger is all about. This shows that this Job needs little to no introduction to its gamestyle, as its very simple. Examine the enemy to see what type they are, choose the correct slayer ability, and fire away. His Quickfire Flurry and Grand Barrage seem good on paper, but due to their randomness they are not actually worth wasting your turns with. Only use them if you created your whole setup around them, including items, passive abilities and sub or main-jobs.

Rangers can also paralyze enemies with their Shadowbind skill, but don’t depend on it too much. There are only a handful of Bosses weak to it, with others resisting the specific ailment. For random encounters as you can imagine it’s not really helpful, as you finish matches fast enough you don’t even need it.

What this Job has as its most valuable asset, is its passives. Out of the three of them, only the Bow Lore is situational. The other two are pretty much mandatory if you are going for a physical build of any kind, canceling out counters and increasing your chance to critically hit. Even in post-game, both of the abilities are used a lot, so don’t sleep on leveling up your Ranger as you do need those.

To be honest, a Ranger outside of his passive skills, is not really needed in a party, other than the situational sub-job utility. His stats are also good, which is a notable fact, and don’t hesitate to use other weapons if you try them out, outside of bows. Daggers in particular pair really well, and if you run a Thief/Ranger build, or vice-versa, Godspeed Strike will do very good damage due to their natural high speed.

With this, we reached the end of our Ranger guide and all it has to offer to the field. Next up, a Job that is all about defense will be our main topic, namely the Shieldmaster.