Who knew stealing could be this fun? 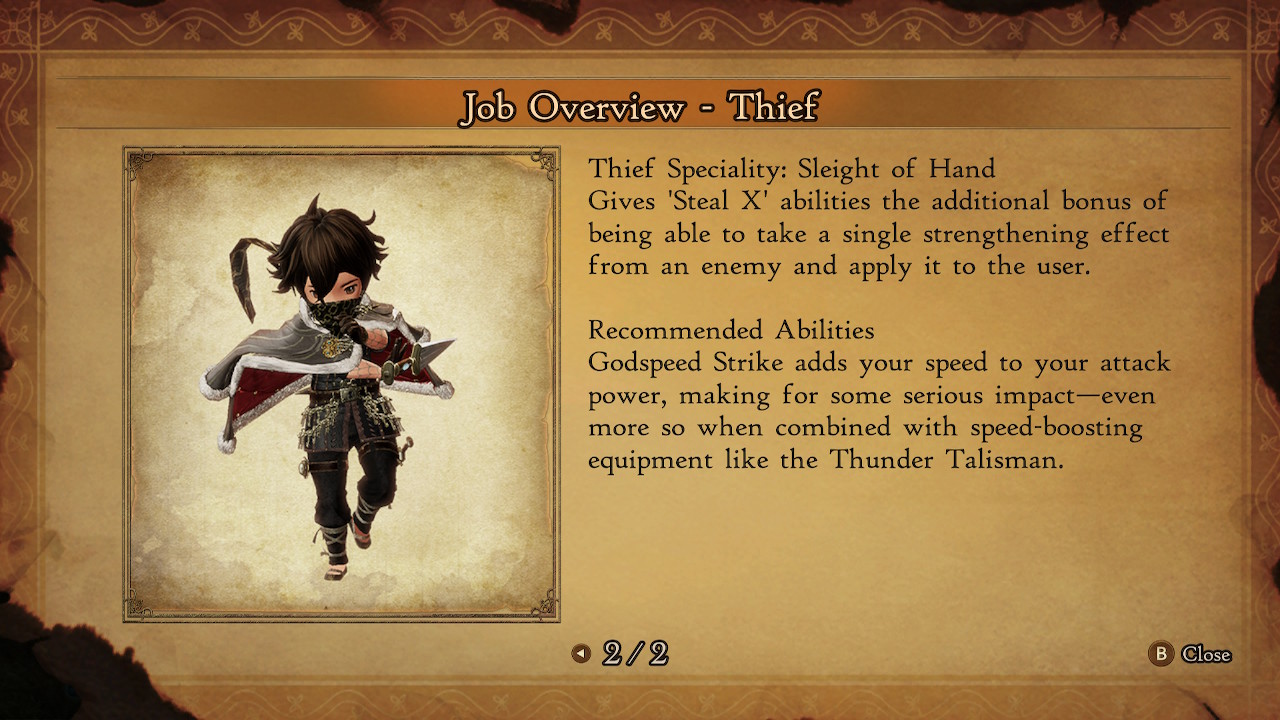 The Thief Job in every Square Enix’s title, is famous for one single thing and in Bravely Default 2 this is no exception. Well, we do have something more to add here in this game about the specific Job, but we’ll talk about it a little later. With covered faces and bandanas, leather armor and their trusty Daggers, Thieves are fast, sneaky and of course, ready to Steal everything from everyone. Let’s talk about all of this and more, right below in this Thief guide.

A thief’s trademark ability is the legendary Steal, and what it does is what you would expect. It steals items from enemies, regardless them being simple monsters or even Bosses. From consumables to rare equipment, Thieves are ready to empty your pockets with no remorse. If you thought that the purpose of the Thief is to solely Steal precious items, you would be surprised to hear that it certainly isn’t in Bravely Default 2. Of course, Stealing items is a neat feature of this Job, but there is a hidden trait within the Thief, that you will realize in the game the moment you unlock it. A certain ability is that perk, namely Godspeed Strike, which is obtained at level 9. While on paper this is another damaging attack, with a very high MP cost to boot, there is a certain function to it that makes it that significant.

Godspeed Strike is enhanced by your character’s speed, plus his physical attack. Not only that, but it also damages again the enemy, after a turn or two have passed. The damage caused is equal to the original one that was inflicted on the same enemy, at the moment he was hit. That is no small amount, especially considering that Godspeed Strike hits REALLY hard. This all results in one thing. Whoever is your Thief in the party, the stat priority for his kit is not his or her physical attack, but rather their speed. Wearing light equipment and accessories that boost speed are the way to go for this. An easy way early on to have a much higher speed stat, is by equipping two Thunder Talismans to a single character. You get many more items to equip that are better than those talismans, further into your adventure, but for the early stages of the game, these are a treat to have.

With all that said, we reach one conclusion. Thieves are not tools to use for getting items, but also extremely good fighters. Heck, in Boss fights, they could be your main damage dealers in the long run. This is further supported at a much later time, when you unlock the Phantom Job. They have a passive ability called Dual Wield, that let’s you have two weapons equipped without the one in your left arm losing any efficiency. This tremendously helps a Thief in regards to damage, and by even pairing these two Jobs together, your Steals and damage output through Critical Hits are greatly boosted.

With all that said, the Thief Job is of course used for abusing the Steal mechanics in the game, as we already mentioned. By equipping their passives, you can Steal twice the amount of items from an enemy, even if that enemy doesn’t actually have two of those items on it. This is especially helpful if you are trying to farm for rare items or equipment that rare monsters tend to have on them.

Overall, a Thief is a Job you will use in the game, a lot. Either that being for stealing or for inflicting huge amounts of damage, you will use them eventually. Therefore, investing on them is not a bad choice at all, even to multiple characters. The more Thieves you have, the better the chances are to get an item or the faster you will clear a wave of enemies. Additionally, the Bravebearer Job has a certain ability that turns single target skills into AOE ones, so if you pair that with Godspeed Strike and the Bard’s Epic-Group Cast, you have a tool of destruction in your hands. Make sure to take advantage of it.

As we conclude our Thief guide at this point, we will be looking after at the first optional Job in the game, the Gambler. In the same nature as the Thief, a Gambler is all about taking risks and getting more money(pg) from enemies. Stay tuned.