Dark Souls 3 is all about the true role playing experience. This means you’ll be picking a class right at the beginning of the game. Choosing which is best for you can be really difficult, although it isn’t a huge deal if you get it wrong, as you can alter your character stats later to compensate for how you play. Still, with how tough the game can be, getting off on the right foot can really be a good thing. So, here is our Dark Souls 3 Class Guide, giving you all the info you need to decide which class to pick. For the right Burial Gift, check out our other guide.

The Knight is kind of the default class to choose. With a heavy emphasis on straight combat, new players will likely gravitate toward the Knight for their Dark Souls 3 runs. With great blocking ability, and a nice set of armor, this is the one to go with if you want to just jump into the game and deal some damage.

The Knight starts at Level 9 and his stats are: 12 Vigor, 10 Attunement, 11 Endurance, 15 Vitality, 13 Strength, 12 Dexterity, 9 Intelligence, 9 Faith, and 7 Luck. This means you won’t do well with magic, but regular combat should be great.

The Mercenary is similar to the Knight, presenting players with a nice combat set to start things off. His high dexterity allows him to use the dual wielding scimitars, giving a fresh spin for Dark Souls veterans. Another decent one for beginners, the Mercenary is better for those looking for more varied and complex combat.

The Mercenary starts at Level 8 and his stats are: 11 Vigor, 12 Attunement, 11 Endurance, 10 Vitality, 10 Strength, 16 Dexterity, 10 Intelligence, 8 Faith, and 9 Luck. Slightly better at magic, the Mercenary really excels at quick fights where you move in, do damage, and get out.

Another great starter set, the Warrior class is very similar to the Knight, with great stats for fighting, including the highest starting Strength level out of them all. The Battle Axe is the real treat for the Warrior, giving players a great starting weapon for all the fights that they will be facing. If you want to deal more damage, and do less blocking then the Warrior is for you. This is where things start to get interesting for Dark Souls 3. The Herald is a straight mix between regular combat, and magical ability. The starting spear will let you keep enemies at a distance, while your 100% physical blocking shield will keep them from harming you. Using your Faith will let you heal well, and use other magical abilities later on.

This may be the Thief class, but it’s not like you’ll be stealing all that much during your time with Dark Souls 3. Instead, the title more indicates what type of stats the character class has. A heavy emphasis on agility and speed, you’ll be moving in for attacks quickly, then dodging your way out. Sneak attacks from behind are also a good tactic. And the high Luck stat means enemies will drop more items, giving you an endless supply of weapons and other gear.

Like stabbing people in the back? Then the Assassin class is for you! The starting weapon, an Estoc, is great for forward thrusts and other types of stabbing maneuvers. On top of this, the Assissin starts the game with the highest Attunement level, giving him plenty of FP for spells and other stuff. This includes a spell to increase your stealth, allowing those aforementioned back stabs. 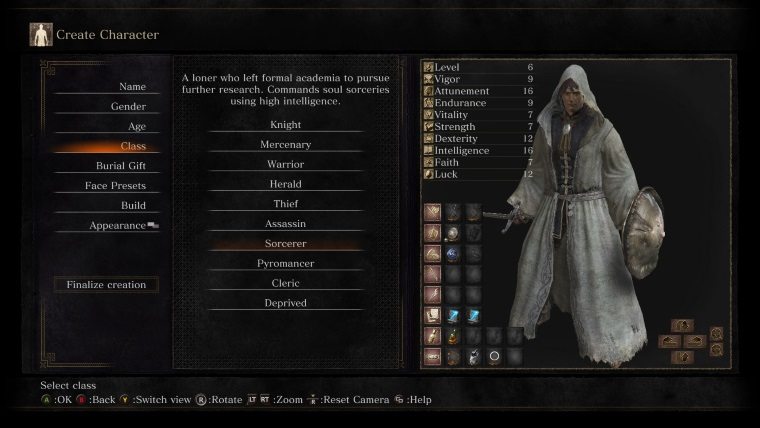 Another low level starter, but a powerful one. The Sorcerer is exactly what you might expect from a class of this name. Extremely high Attunement levels mean more FP for spell casting, allowing use of offensive spells on top of the usual heals and buffs. However, if you run out of FP, the Sorcerer isn’t totally useless, as his starting weapon is decent enough to get some kills. Overall, the Sorcerer is a great late game character, if you boost the right stats. Pick him if you are more experienced, looking for a challenge, and wanting the best character much later in Dark Souls 3.

The Pyromancer starts off with a great fireball spell, with more pyromancy spells unlocking later in the game. Until then you might feel like his abilities were oversold, though his starting Hand Axe is powerful enough to keep you moving forward. You also have high enough stats to allow you to utilize other spells, including ranged attacks, so this is a great offensive character with high spell casting abilities. With so many enemies that are susceptible to fire, he’s also very powerful early in the game. Overall, the Pyromancer class is a great mix for any player.

The Cleric is a big magic user, with high stats that allow for the use of Miracles like Heal and Force. His armor is really low, so don’t expect much defense, but by using your spells wisely, and relying on your starting Mace when necessary, you should be able to take on some tougher enemies. This will require a lot of skill though, so avoid if you are new to the Dark Souls series. 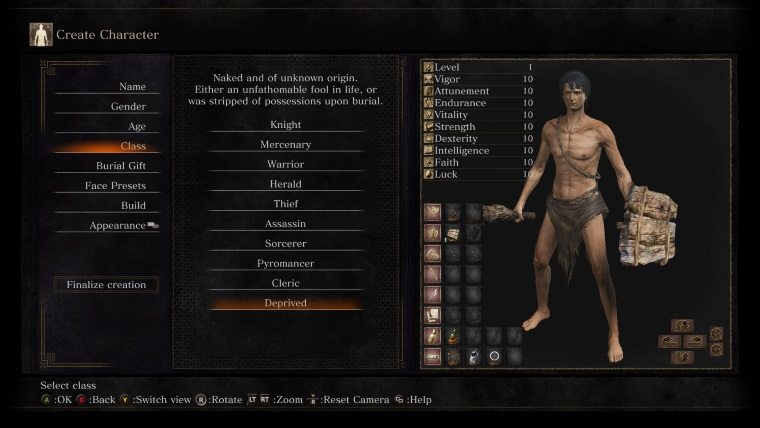 The ultimate challenge. The Deprived class is exclusively for very experienced players, as it essentially is the lowest stats for any class. There is no focus at all here, with even stats across the board. Deprived characters also start with no clothes other than a bare loin cloth, so defense is out the window right from the beginning, aside from a very weak shield. Their offense isn’t much better, with a simple club. Starting from scratch is the only real benefit, so you can shape this character however you want.

That’s it, every single class in Dark Souls 3. Which one should you use? Well, that depends on how you want to play. As the guide says, there are a few good starter classes for new players, such as the Knight or Warrior. For those who have played a lot, there are many more options, with the Deprived always good for a challenge. Once you decide how you want your character to begin, you need to pick a Burial Gift, so head here for info on all of those.