Deathbird Boss Guide: How to Beat the Deathbird in Elden Ring

Bringing Death to the Deathbird of Limgrave 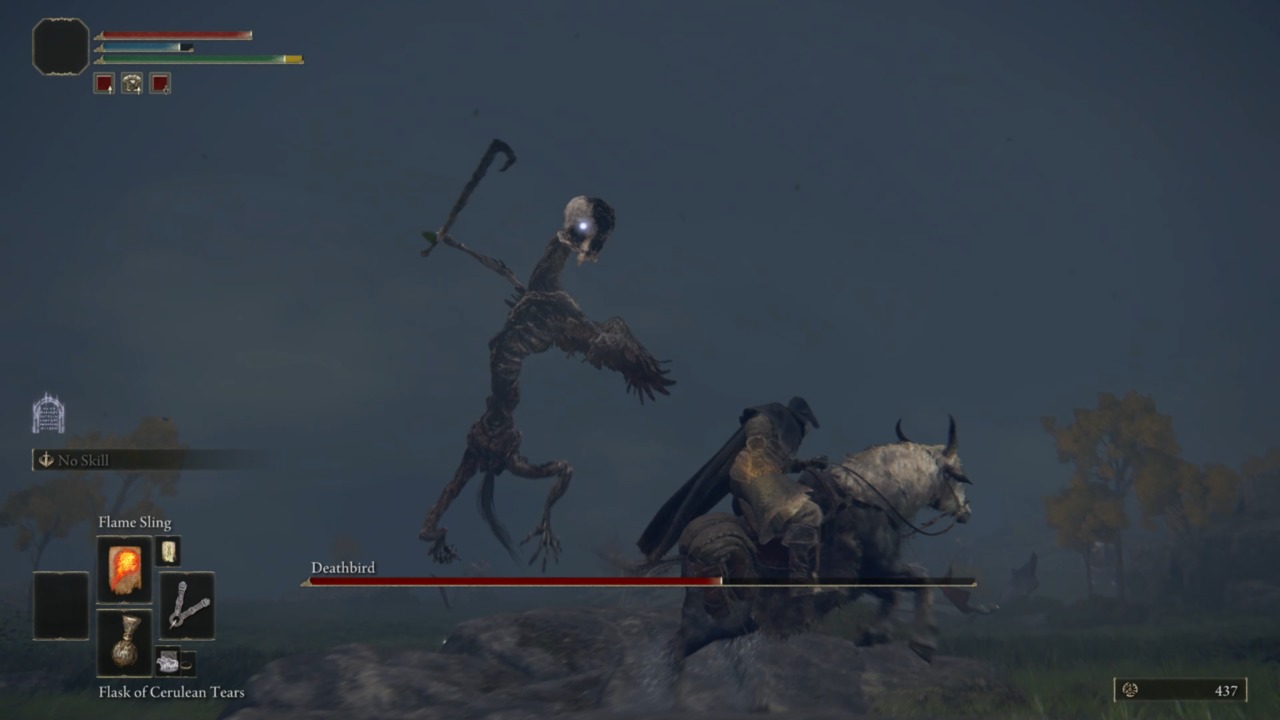 It may not surprise you that the Deathbird is very capable of brining death to the Tarnished. Quite easily too. This boss is located in the open fields and coming across it happened either because you were looking for trouble or it was simply sheer bad luck, and you were probably scared out of your mind.

The Deathbird is located in Limgrave – South-East of the Warmaster’s Shack that has the Site of Grace. The spot where you can find Deathbird is near where the trolls patrol so be careful not to attract unwanted attention. You will see a large stone ruin with tons of glowing items on it, and if you go stand on that ruin the Deathbird will appear ready for battle. Deathbird only spawns at night. You can advance time at Site of Grace nearby.

This boss wields a large bone sword and has some serious range when it comes to all its strikes. While Deathbird is not capable of flying it can lunge and glide at you. This makes its aerial attacks unpredictable as its hang time can vary and it has several different slash combos it utilizes once in the air. Getting in close and staying there is also ill-advised as Deathbird is capable of shouting at you for a bit of damage, but this will also build a poison meter on the Tarnished. Because of this, on foot close combat is highly dangerous and can lead to the death of even high-level players. 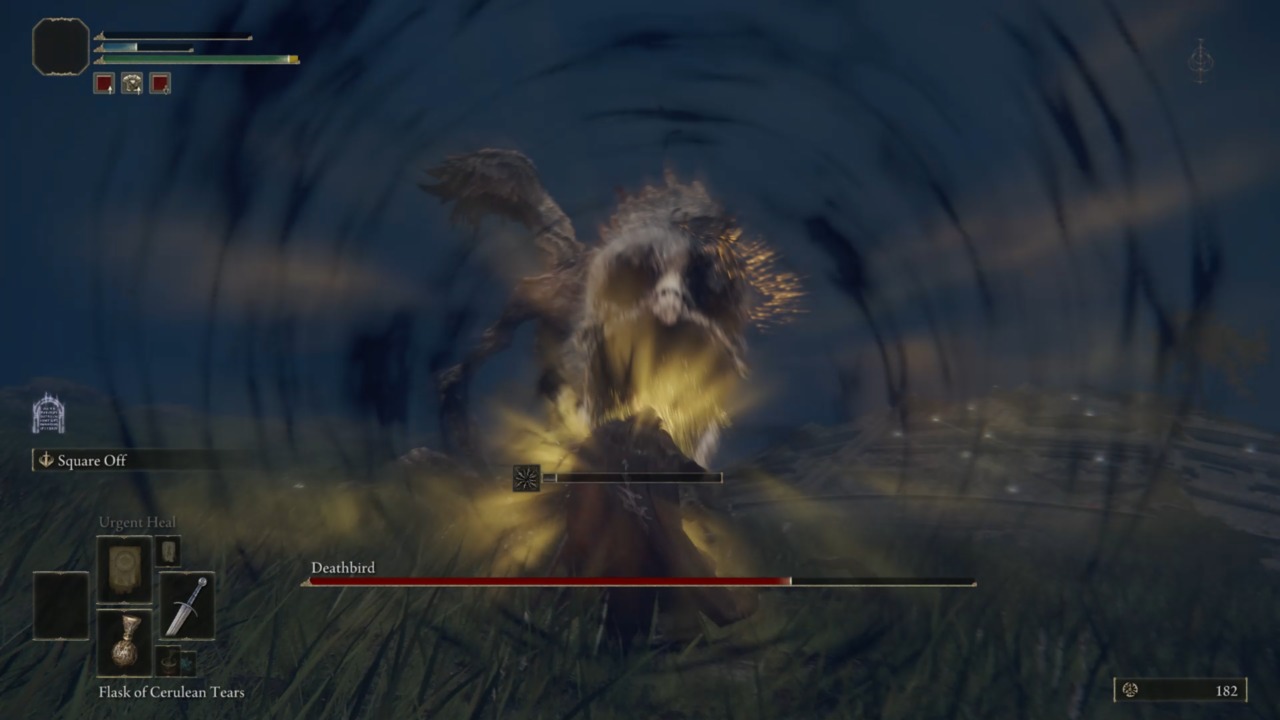 It is also important for players to remember that this is a field melee. There are outside entities that will affect this fight and if ignored will become nuisances. In this case, you will be dealing with three potential interruptions: Bats, Trolls, and worst of all… Rams.

Yes, rams will most likely become your biggest nuisance in the fight with Deathbird. There is a flock of rams near the ruin, and they will become aggressive with you on sight. If they manage to hit you is not the issue as they do almost no damage, but if not dealt with they can easily block your way. If you try to dodge or move in a direction, they are sitting in you will run into them and get stuck. The bats will also become an annoying issue if left unchecked as three of them will be flying close by. They can hit you with their shout attacks and wreck the rhythm of your fight. Finally, the trolls are mostly out of your way, but if you battle carelessly, you will call their attention and really mess yourself up.

Defeating The Deathbird with Melee 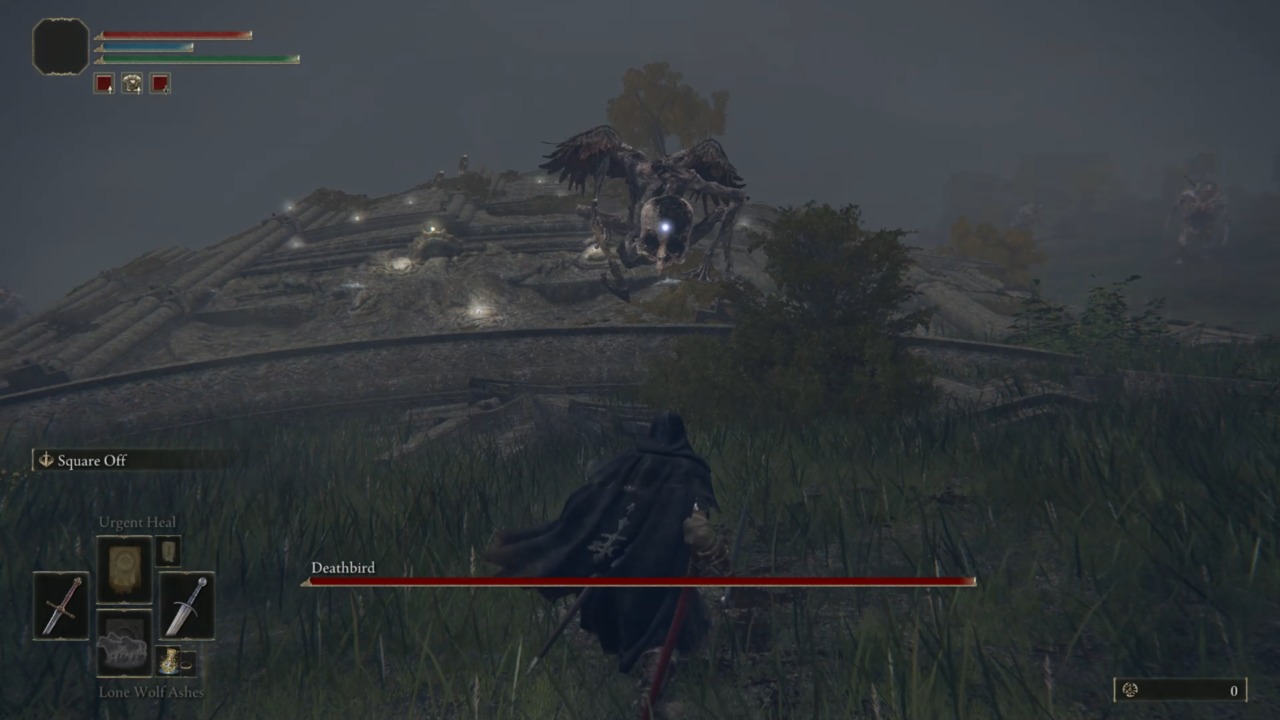 As stated above it is not wise to challenge the Deathbird on foot. His poison shout will punish you and his strikes are devastating and fairly difficult to dodge. One factor that could turn this into an easier fight is having a 100% physical resistance shield. If you have a shield like this and block all of its attacks without losing any health, you will be just fine. Block its blows, punish it, then make your way off on Torrent to avoid the poison blast.

If you want to fight this creature with melee weapons though, the best option is to ride around on Torrent. Unlike with the Tree Sentinel, double jumping helps dodge most of Deathbird’s stabs and slashes more than dashing away. When the boss takes to the skies with a lunge, then you will want to dash away and maneuver around the creature’s devastating landing. Dodge, 1-2 slashes, and repeat until the Deathbird lies dead.

Defeating The Deathbird with Magic 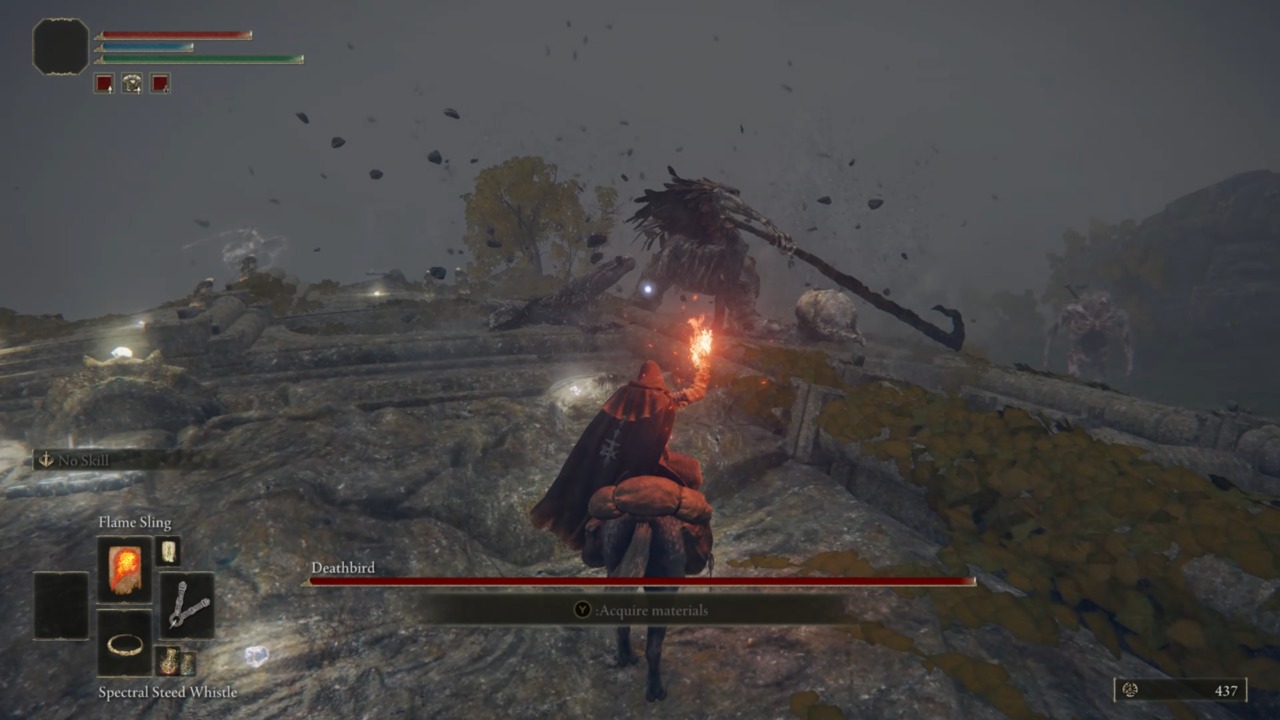 The fight is extremely easy if you are using spells while riding Torrent, as the Deathbird takes its time to actually approach you and prefers moving slowly if you are keeping your distance. There is a sweet spot you can ride in where you are close enough for most spells to land a headshot, but far enough away to not warrant the boss to attack you. More experienced spell users, however, should simply ride at a safe distance and spam spells. The fight will be over in the blink of an eye, and if you find that sweet spot you may not even take a single hit. Once swift death is brought to Deathbird you will be rewarded with the Blue-Feathered Branchsword Talisman.

Attack of the Fanboy / GAME GUIDES / Deathbird Boss Guide: How to Beat the Deathbird in Elden Ring