Destiny 2: Is the Quicksilver Storm Exotic Auto Rifle Worth It? The new expansion for Destiny 2 has been announced and brought with it something that hasn’t been seen before in Destiny 2. Lightfall will be the next big story for Destiny 2 and players can already pre-order it to receive bonuses. Usually, these bonuses are some cosmetics and an ornament for the exotic you get during the DLC’s campaign but this time around it’s a bit different. If you pre-order Lightfall you will immediately be given the new exotic Quicksilver Storm. Let’s go over if this Quicksilver Storm is worth getting in Destiny 2.

Is Quicksilver Storm Worth Getting in Destiny 2

The Quicksilver Storm is the newest exotic auto rifle to be added to Destiny 2 and it has been a while since we have seen one of these. It’s no wonder we don’t see a lot of exotic auto rifles since they are never much brag about. They are good for clearing out small ads and with the current season, useful for breaking barrier champions if you don’t want to use a sniper. However, Quicksilver Storm came to try to change this stigma about auto rifles.

This is achieved through the perks that come with Quicksilver Storm and the statline that it has:

The big draw with Quicksilver is that 100 stability which makes the auto rifle a breeze to control. The max stability mostly comes from the weapon’s perks of Corkscrew Rifling which adds range, stability, and handling, and Hand-Laid Stock which further improves stability. It also features High-Caliber Rounds that knock your target back and more range to the weapon. 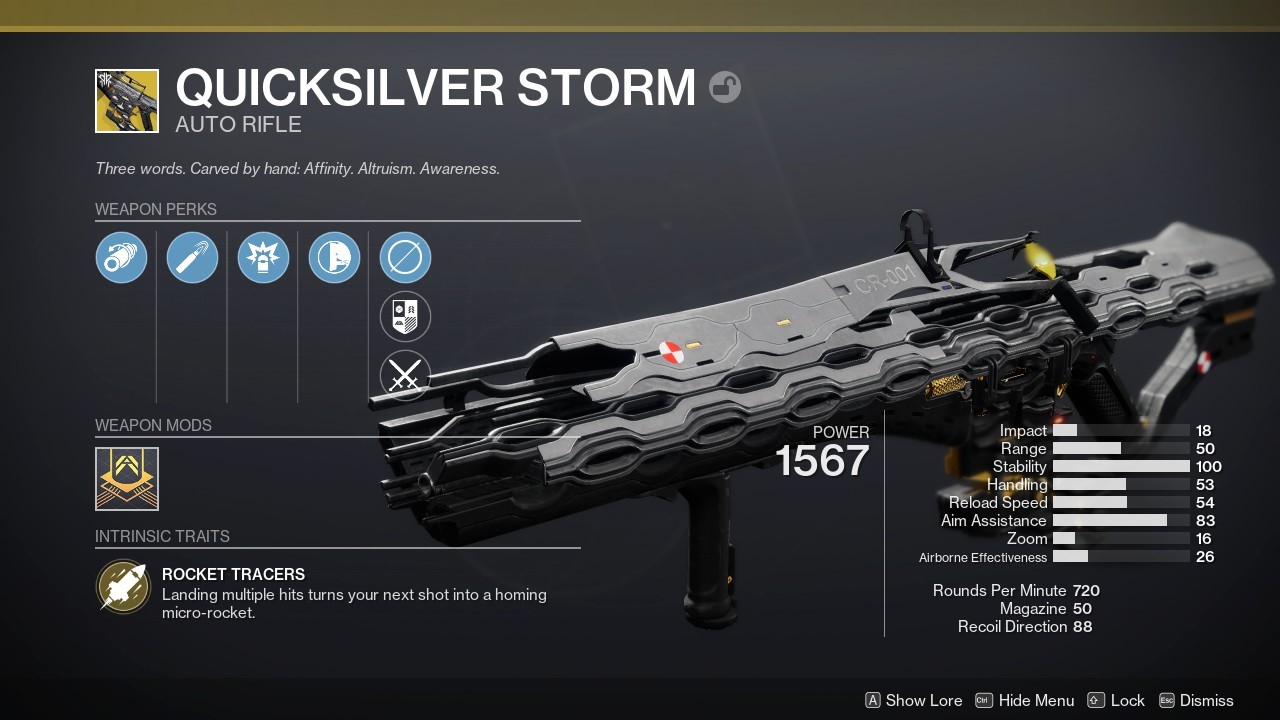 While those stats are great, the real draw of this weapon is the damage it can deal. Auto rifles don’t deal much damage by default compared to some of the harder-hitting weapons but the intrinsic trait of Rocket Tracers seeks to change this. Rocket Tracers add a homing micro-rocket that gets fired after landing multiple hits on a target. Every four of five hits you manage to land will fire a rocket that will hit the target you were shooting at for a decent chunk of damage.

This intrinsic also works with the other perk on Quicksilver Storm, Grenade Chaser. Hitting multiple rockets will store a grenade in the rifle up to three grenades. By pressing reload you can switch to grenade launcher mode and fire off all your stored grenades for massive damage. While Quicksilver is still out damage by linear fusion rifles and other heavy weapons. But since this is a white ammo weapon you don’t need to worry about finding ammo, allow you to use this for damage in a pinch.

This makes the Quicksilver Storm a solid option to run if you don’t have a build centered around a different exotic weapon. It brings good ad clear to the table as well as the ability to deal a decent chunk of damage to larger enemies. While this may not be the next game-breaking exotic, it is still a solid option to use for an all-around build. Plus you don’t need to go out of your way to get it since it is a pre-order reward for Lightfall. If you need any more help with Destiny 2 make sure to check out our other guides.

Attack of the Fanboy / GAME GUIDES / Destiny 2: Is the Quicksilver Storm Exotic Auto Rifle Worth It?