The Division Guide: How to Raise Your Air Filter Level 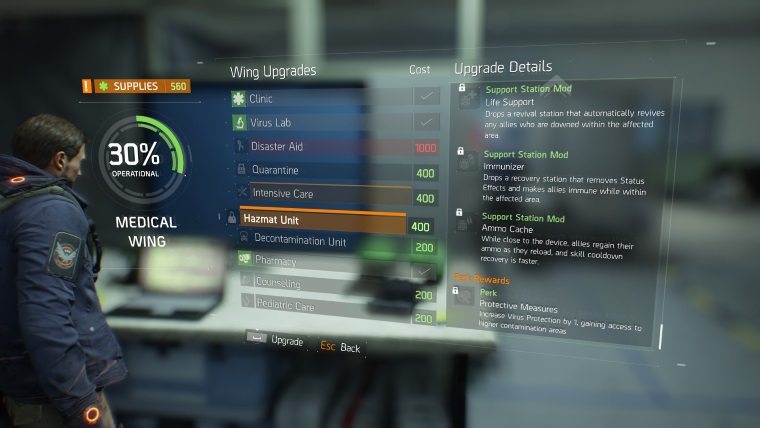 Throughout your time in Tom Clancy’s The Division you will stumble upon areas of the map that are essentially inaccessible to you. Sure, you can walk through them, but you’ll die very quickly. These are quarantine zones, where your character has to have an upgraded air filter in order to avoid taking damage from the virus. If you preordered the game you can grab the Hazmat Suit (find out how right here), but for the rest of us, you’ll need to raise your air filter level, and fast.

The Division has a whole lot of stats that you can level up for your character, almost all of which are important. However, the air filter will actually give you physical access to many otherwise impassable spots. So, how do you raise your air filter level in The Division?

The key is the Medical Wing of the Main Base. Many of the upgrades in this area will raise your air filter level. It is listed under the Perk spot, so head to the Medical Wing, load up all of the upgrades, and see which ones work. For example, the Hazmat Unit upgrade, which is pretty cheap at 400 medical supplies, will raise your air filter level by one.

Keep an eye out for these, as there are some cheap upgrades that will raise this very important level. It also will allow you to gain access to areas that give you bigger and better loot, so it’s kind of a feedback loop of sorts. Get the level higher, and you can complete more missions, which gives you more supplies, which then lets you get more upgrades.

It also helps a lot in the Dark Zone, as the subway is locked off for higher air filter levels. You don’t want your group to have to leave you behind, and watch as they exit with some really great loot.

Home / Game Guides / The Division Guide: How to Raise Your Air Filter Level