Elden Ring Giant Pot: How to Beat Knight of the Great Jar

Don't be afraid to fight dirty. You may have noticed the iconic jar-dwelling creatures of Elden Ring even before the game was released.  There’s not much to say about their appearance aside from what looks like a rocky golem with an outer shell of a jar, but one variant towers above the rest of them.  Found in Caelid just through the ravine after exiting from Deep Siofra Well, there’s a massive character known as the Great-Jar, and he is utterly silent, only leaving three AI-controlled PvP summon signs for you once you speak with him.  Find out How to Beat the Knight of the Great Jar in Elden Ring!

Elden Ring Giant Pot: How to Beat Knight of the Great Jar Don’t Be Afraid to Fight Dirty

The first thing you should do when you summon these individuals is, when they spawn, wait until just after you can lock on, to hit them with your strongest attack first.  Consider status afflictions like Frost, Poison, Scarlet Rot, or Blood Loss, and arm yourself to quickly dispatch your opponents with ruthless efficiency.  Don’t go into this fight before you’re ready, especially if you have low defenses, because any of these three knights can one-shot you, either with magic or close combat.

The knights must be defeated in sequence, you can’t go to a site of grace after beating just 1, as you’ll come back and spot another 3 summon signs.  They each spawn with different loadouts randomly, with varying resistances to physical and magic attacks, so consider having a flexible loadout.  It’s good to consider greases to apply to your weapons to inflict statuses or extra damage, or if you’re a magic-user, to have a suitable melee weapon or at least a sorcery like Carian Greatsword for when they get close. 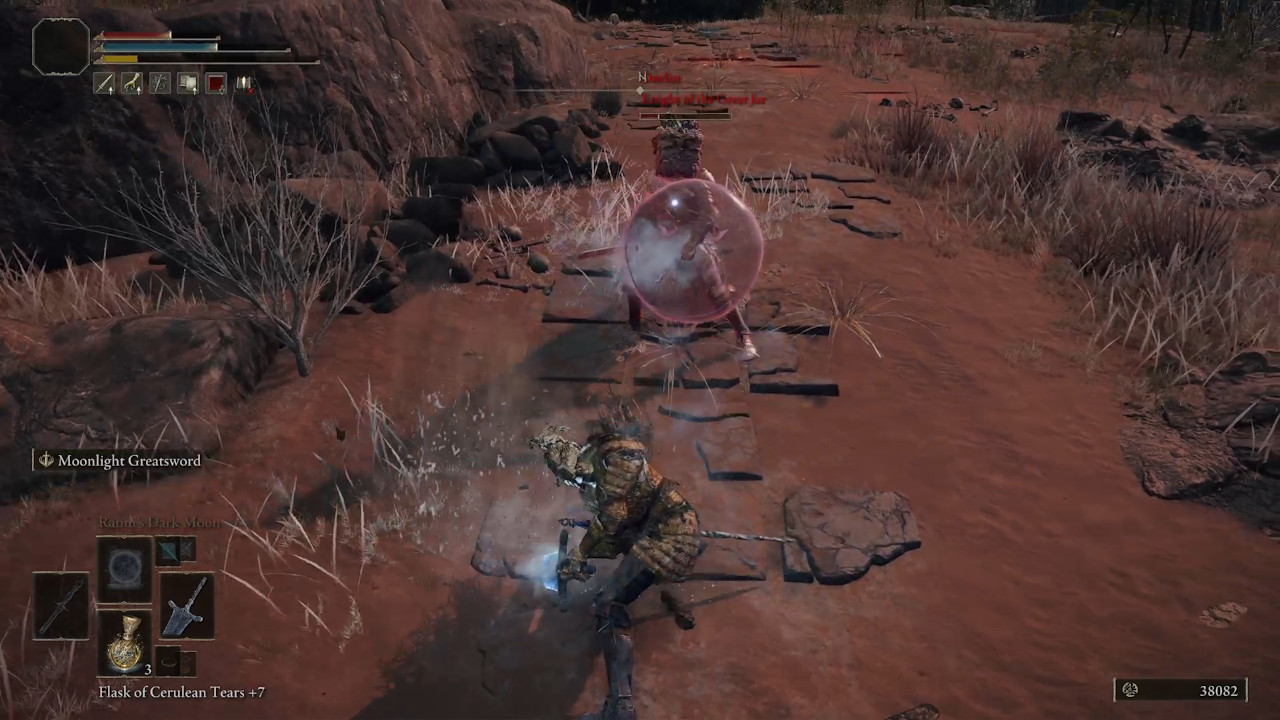 Luckily, these are human-sized opponents, often with reasonably breakable poise, and if they use shields, they’ll often overuse them even against heavy weapons.  They stagger fairly easily, and just after they spawn is a vulnerable opening when you can unleash your strongest assault, like a charged attack of Rennala’s Full Moon, or a beam from the Sword of Night and Flame.  If you break down their poise, go in for that critical attack, you’ll need every opportunity you can get to kill these enemies fast.

Avoid light magic attacks and projectiles, as these enemies like to dodge-roll, taking a page from any Soulslike playbook.  They can carry flasks, so make sure you’re stocked up well in case you need to outlast them. After you defeat all three enemies speak to the Great-Jar, he will remain blasé despite your achievement, but will silently give you the Great-Jar’s Arsenal.  This is not stackable with the Arsenal Charm, so it’s not incredibly helpful, but can boost your max Equip Load just enough if you wanted to wear heavy armor but still move about more quickly.

This concludes our guide on How to Beat the Knight of the Great Jar in Elden Ring!  If you’re looking to check out other areas nearby like the Divine Tower of Caelid, be sure to read on.  Be sure to check out our other guides and our review.

Attack of the Fanboy / GAME GUIDES / Elden Ring Giant Pot: How to Beat Knight of the Great Jar