Brave the wetlands of Liurnia with the help of your map! If you’ve been playing Elden Ring since the release this past weekend, you might have found yourself in the Liurnia region either after defeating Godrick or skirting around the eastern exterior of the Stormveil Castle.  Liurnia might very well be the next area you explore after the Stormveil Legacy Dungeon and is surprisingly even larger than Limgrave.  The map of this region takes up 3 Map Fragments compared to Limgrave’s 2, and you’ll need these to plot out your next excursions in the game.  Read on for our guide on the East, West, and North Liurnia Map Fragment Locations in Elden Ring!

We went ahead and provided the locations and nearby landmarks with helpful images for you to find these map posts more easily: You should start your reconnaissance from the Lake-Facing Cliffs site of grace outside Stormveil Castle’s throne room, and go northwest along the shallow water to find the East Liurnia Map Fragment.  One important thing to note when exploring this region is the foes can quickly become more dangerous, so keep on your steed while exploring. 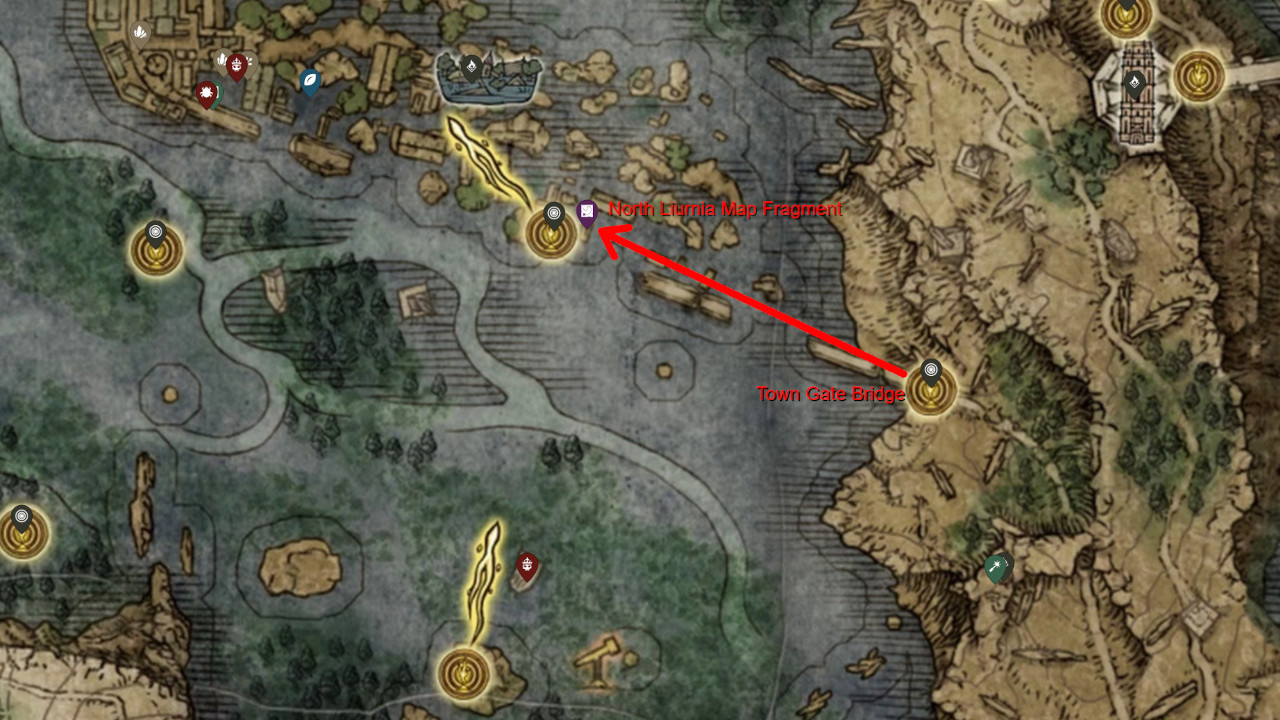 Next, return to the Lake-Facing Cliffs and go north along the Liurnia Highway on dry land until the road turns left onto the Gate Town Bridge site of grace.  From here, ride carefully onto the wetlands, directly northwest to the flooded Academy Gate Town and you’ll see the North Liurnia Map Fragment directly next to another site of grace. The final post is a much longer journey than the others, but from the North Liurnia Map Fragment, cut west along the wetlands and north along the exterior of the Academy, until you reach the northern coastlines.  Ride along the road northeast from here to reach the Northern Liurnia Lake Shore site of grace, and the nearby West Liurnia Map Fragment post.  This one has easily the most enemies along the way, but if you stay on your steed, you’ll likely get by without any issue.

Finding these maps is like a scouting mission, and it also establishes a foothold into deeper territory, but don’t go too deep without discovering those sites of grace.  You won’t want to lose your progress before mapping out the region.

This concludes our guide to the East, West, and North Liurnia Map Fragment Locations in Elden Ring!  The game was released to critical acclaim on February 25, 2022, for PC, PlayStation 4 and 5, Xbox One, and Series X|S.  Be sure to check out our other guides such as the Caelid, Dragonbarrow, and Limgrave maps, and get to exploring!