Fallout 4 Guide: How to Start the Far Harbor DLC 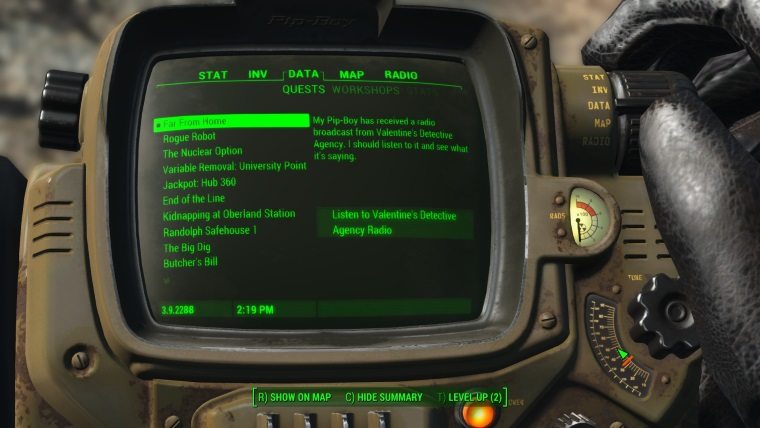 Fallout 4 just received its first major piece of DLC expansion content with Far Harbor. This new DLC adds a whole new island to explore, full of mysteries, and some fun new quests. But you won’t be able to enjoy any of it if you don’t know how to even get started, so here’s a quick guide on how to start the Far Harbor DLC in Fallout 4. For actual tips on what to do once you are on Far Harbor island, click here.

First off, make sure you’ve downloaded the update. With this being the biggest landmass that Bethesda has ever added to one of their games via DLC, it’s a pretty big download. Once it’s all on your hard drive and installed you can start up the game.

There is now level requirement for Fallout 4 Far Harbor, however, you will have had to complete the mission “Getting a Clue”. This is the first mission where you are introduced to Nick Valentine, who plays a critical role in the Far Harbor expansion. This mission is pretty early on in the game, and is a part of the main questline, so most players should have completed it by now. And really, while there’s no specific level you have to be to go to Far Harbor, it is certainly a high level area, so make sure you are well equipped.

Once you have completed that mission, and started the game with Far Harbor installed you should be prompted with the mission “Far From Home”. This will pop immediately upon starting the game, and tells you to listen to Valentine’s Detective Agency Radio. Switching to this radio station will task you with heading to Nick’s office in Diamond City. Head there and speak to his assistant to get the details.

After this you’ll begin a new mission that takes you way to the north east of the Wasteland. Head up there and perform the required tasks and you should very quickly be on your way to Far Harbor.