Act IV of the Genshin Impact event “The Chalk Prince and the Dragon” is live with a new boss: the Frostborn Miracle Resurgent Cryo Regisvine. This monster plant hits hard, but if you and your team are mindful of its mechanics you’ll discover this once imposing death-flower is a pushover.

The Frostborn Miracle Resurgent Cryo Regisvine in Genshin Impact has a healthy variety of attacks, and the majority will either nearly kill you, or one-shot you entirely. That said, if you actually play to the mechanics you’ll find the fight is pretty darn simple. The Frostborn Resurgent Cryo Regisvine fight does feature co-op matchmaking similar to Domains, and it’s recommended someone brings a healer along (Qiqi is great for this fight; Barbara . . . not so much). Having one or two powerful Pyro characters is also recommended (if you are playing solo I genuinely recommend Amber, since she can sit back away from most of the mechanics and damage the core with charged shots).

The fight opens with the Resurgent Regisvine in an ice shield, and ice slimes will spawn. You will have 10 minutes to clear the fight, so you may feel the need to rush. DO NOT attack the slimes immediately, because the Regisvine will cast icicles around the arena that spawn on you and teammates. Stacking on a slime to blitz it out of the gate will lead to a wipe due to this mechanic. Instead, run away from each other until all the icicles have exploded. Kill the slimes to spawn a Scarlet Quartz, then use it to break one of the three frost crystals maintaining the shield. There will also be cryo whopperflowers, but you should focus on the slimes and shield. 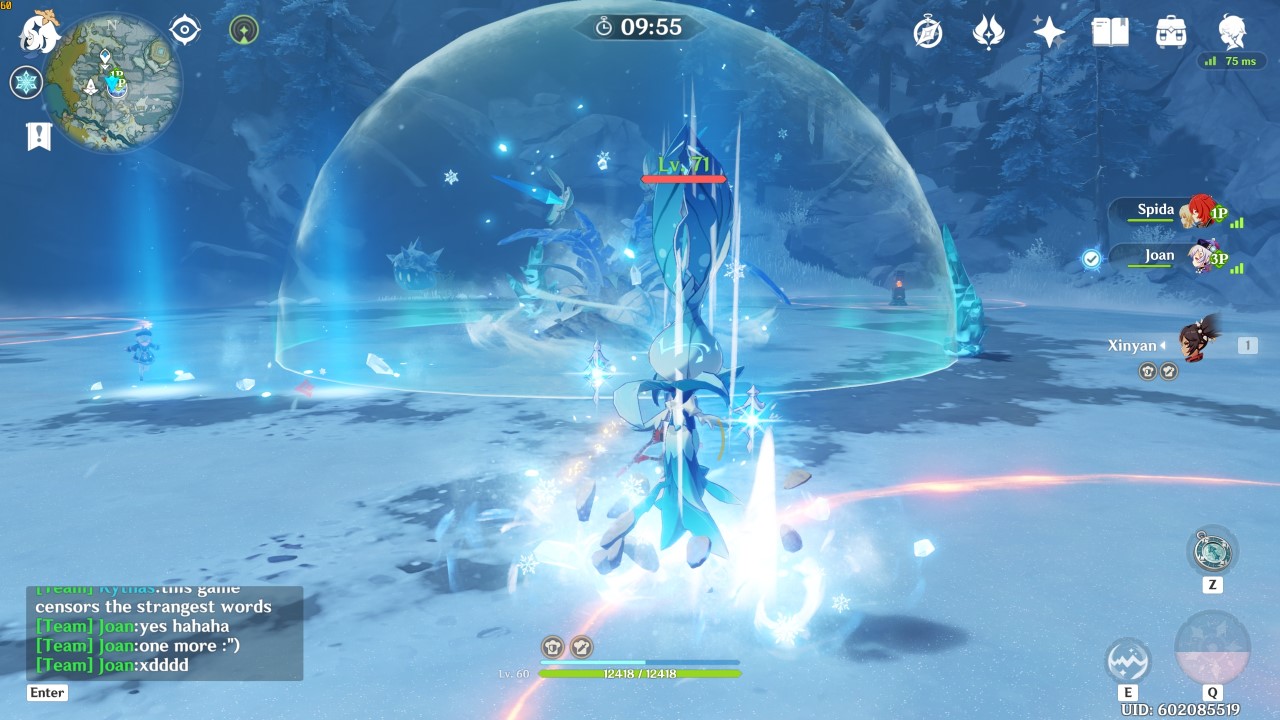 Once the shield is down it will remain down, though there remains plenty to avoid. The Regisvine will have an ice core like the regular Cyro Regisvine, so break this to stun it and make it vulnerable to attack. While attacking this core look out for its slam and laser attacks. It will quiver while looking up before a slam, and its arms will swing out for the lasers. These can be dodged. Additionally, Scarlet Quartz will spawn throughout the fight: grab these to stave off Sheer Cold, to deal extra damage, and to complete the “Hit the Regisvine with 10 Quartz” event objective.

After you break the ice core and stun the Resurgent Cryo Regisvine once it will rise up and spin in a small circle around itself. Dodge away to avoid the attack. After, ice crystals will spawn near the heating Ruin Braziers, and they will be marked. These MUST be broken immediately, because the Regisvine is about to “unleash all its energy”. This will cover the entire arena in deadly frost, and anyone not within the bubble generated by the broken ice crystal will die. I.E. rush over to break it, and stay in the bubble until the attack wears off.

Once the Regisvine is down you’ll be teleported outside the arena next to the chest with your Miraculous Essence within. If you are in a party you can return to the event marker and queue up for another round (Genshin Impact has a ready-check for the fight). You can fight the Resurgent Regisvine as many times as you want before the event ends, which I advise doing to clear out the Chalk Dragon and the Prince event store of all its goodies. There are 9 of each blue-tier talent book available, atop a talent crown, Mora, and some Wits.