Genshin Impact: How to Get to the Serpent’s Cave Location

Finding The Cave Where The Ruin Serpent Dwells. The Serpent’s Cave is one of the new locations that is added with the most recent patch of Genshin Impact. Aptly named the Serpent’s Cave due to the new world boss that resides within, the place is not immediately accessible by players, but instead lies within the depths of the Chasm, a new region affiliated with Liyue that came with the current patch, alongside the new character Kamisato Ayato, weapon, and events to follow. This guide will cover the procedures required for gaining access to the underground areas of The Chasm, and what needs to be done afterward to reach the Serpent’s Cave.

How to get the Serpent’s Cave in Genshin Impact

The Serpent’s Cave is located to the west of the closest waypoint in the Ad-Hoc Main Tunnel, across a wooden bridge high up in the air. Ahead of that is a tunnel that will eventually open up to reveal a waypoint above a cliff overlooking the grounds that the Ruin Serpent tunnels under.

As per tradition with new patches in Genshin Impact, a chain of world quests is generally tied to exploring and unlocking all the facilities and waypoints that the new locale has to offer. The Chasm Delvers series of world quests is the one that needs progressing for the player to eventually unlock the Undeground Mines for The Chasm. Progress and follow the instructions of the NPCs related to the questline until you’ve completed Surreptitious Seven-Star Seal Sundering, this opens up the Mines beneath The Chasm and is the place that contains the Serpent’s cave. 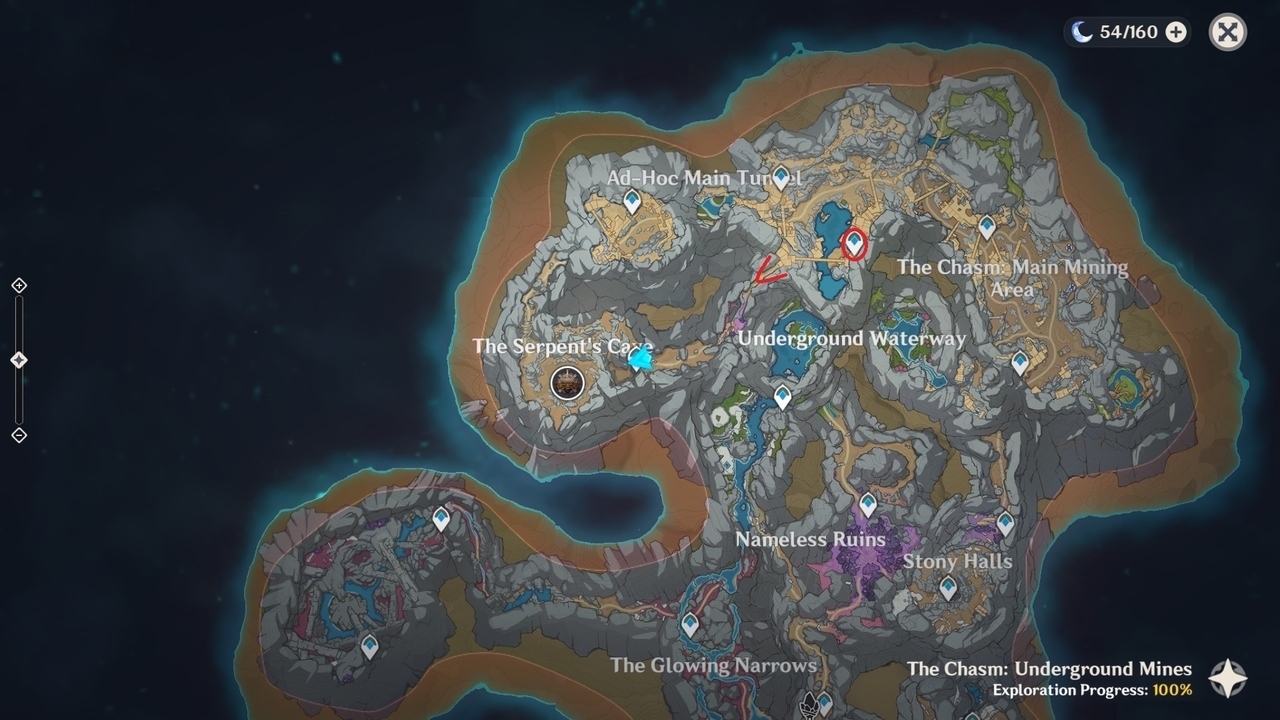 After reaching the Underground Mines, players should set out to obtain the Lumenstone Adjuvant, a gadget that comes with progressing further down The Chasm questline, obtaining it will make defeating the Ruin Serpent easier as some of the mechanics related to the Boss can be countered only using the effects of said gadget. Upgrading the Lumenstone Adjuvant increases its range and effectiveness, players can do that first before tackling the Ruin Serpent if they are so inclined.

If followed correctly, players should find themselves in a large open space with the Ruin Serpent beneath them slithering through the soils of the Earth. For any who are potentially confused, the Ruin Serpent doesn’t drop any materials that are required by existing characters, including Ayato, who needs items found in Inazuma. Though if you’ve come looking to farm materials for Yelan, an upcoming hydro bow user on the other hand, however, then the leaks would suggest that this is the right place to be. May you triumph against the Ruin Serpent in battle.

Attack of the Fanboy / GAME GUIDES / Genshin Impact: How to Get to the Serpent’s Cave Location