All work and no play makes Keqing a deadly combatant. 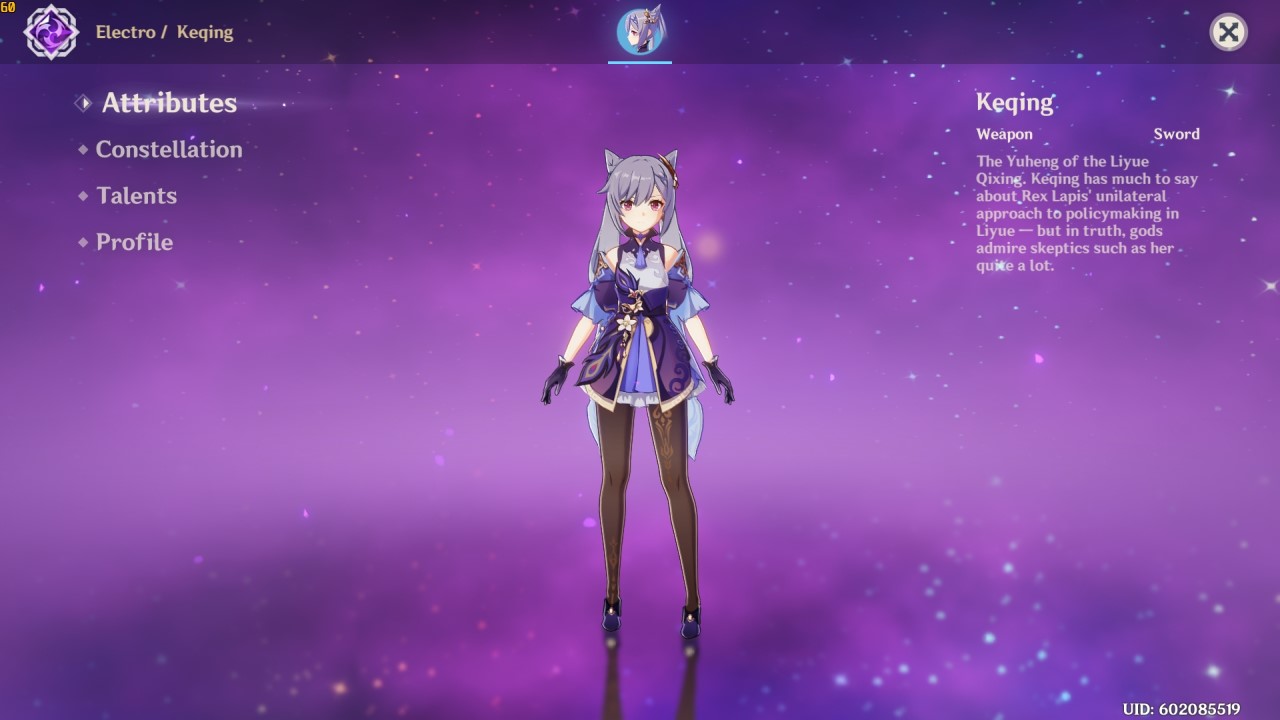 Rex Lapis may be Liyue’s god in Genshin Impact, but the nation would collapse if not for the dedicated Keqing. The Yuheng of the Liyue Qixing, Keqing oversees the day-to-day operations of Liyue, and she is a stout believer that actions are infinitely more important than words. She’s a committed workaholic, and an ace damage dealer in combat. Keqing wields Electro and a sword in battle, where her enemies know no mercy.

Below are listed Keqing’s full set of attacks and abilities, her passive talents, constellations, and finally all of her ascension and talent material requirements. Build recommendations, to include both suggested weapons and artifact sets, are in the center of this guide following Keqing’s constellations. If you’d like to see a full list of stats – such as damage numbers, percentages, etc. – check out Honey Hunter World, which was used as a source for this guide. You can find guides for other characters by following the link here to our complete Genshin Impact character list.

Keqing is a dedicated damage dealer, so she doesn’t really fit into a support role in Genshin Impact. Because of this you’ll want to equip Keqing with artifacts and weapons that boost her Attack and Electro damage, followed by Crit Rate and Crit Hit. You can embrace both a purely Physical or Electro build for her, though Electro reactions are currently not in a great spot in Genshin Impact. Either way, she is a crit-machine, so you can safely go with one or the other without squandering her massive potential.

Since Keqing can be safely specialized in either Physical or Electro damage, the weapons you’ll want are quite varied. Physical builds benefit from the 5-star Aquila Favonia, but the 4-star Prototype Rancour is a solid backup if you either can’t or don’t want to pull for the Aquila Favonia. Electro Keqing builds in Genshin Impact have two 5-stars to choose from – the damage-boosting Black Sword, or Crit-increasing Skyward Blade – depending on which direction you want to go. The 4-star Lion’s Roar is an acceptable 4-star replacement, but it is also locked behind gacha pulls.

Artifact sets for Keqing are also determined by which of the two damage builds you choose in Genshin Impact. Physical damage Keqing builds will want the four-piece bonus from Bloodstained Chivalry, and Electro builds will want either a mix of Gladiator’s Finale and Thundering Fury, or a full Thundersoother set (the combination set being easier to complete). Once again, Keqing builds in Genshin Impact benefit from Attack percentage, Electro damage, Crit Rate, and Crit Hit artifact rolls.