A boss with guile and brutality in equal measures. 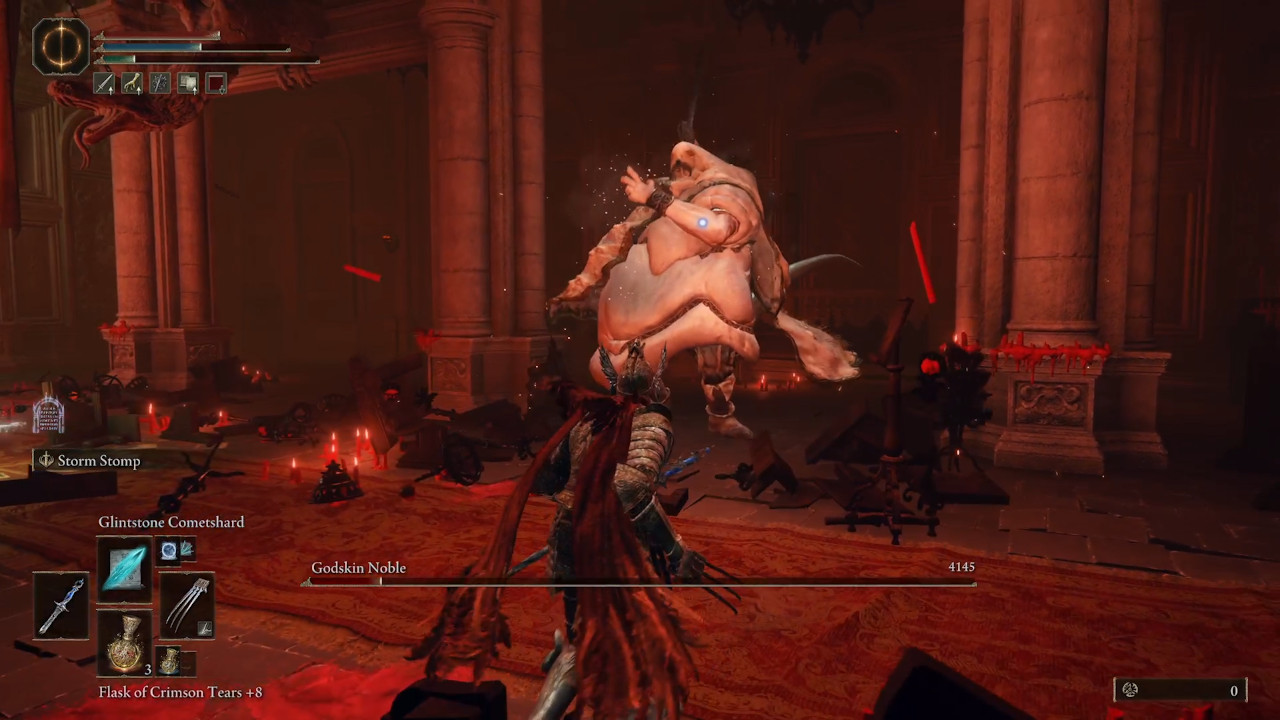 The Godskin enemies are a recurring set of bosses and mini-bosses that appear along your journey in Elden Ring.  The Apostle is lanky and tall, while the Godskin Noble is stout yet incredibly agile.  Fighting these enemies means putting up with their far-reaching physical attacks and Black Flame ranged assaults, and in the case of the Noble, in particular, you’ll find yourself pushed into corners a lot.  Whether you’re facing him in the Temple of Eiglay at Volcano Manor or elsewhere as he appears, you’ll want to know how to handle this enemy consistently.  Read on for our guide on How to Beat Godskin Noble in Elden Ring!

The Godskin Noble is an agile opponent, but leaves himself wide open to attacks, especially when using his Black Flame magic, so when he does, get in close, and consider anything that can inflict Scarlet Rot on him.  He can contract this rather quickly if you’ve coated your weapons with this, for instance, and it’ll stack nicely with Blood Loss if you were considering some rapid-fire Blood Blade attacks.  Whether you fight at a distance or up close, consider anything like Rot Grease or Rot Pots to keep him losing HP while he pursues you. 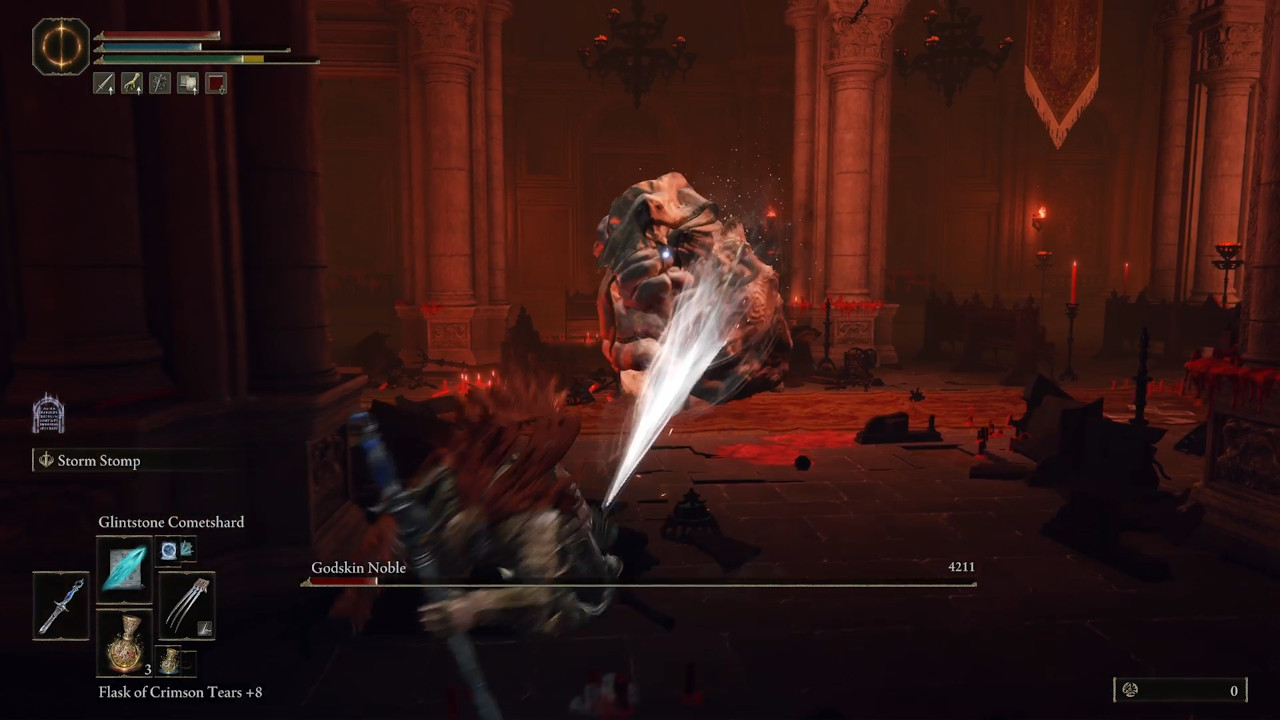 Attacks that the Godskin Noble is known for are rapid thrusts with his sword which reach quite far, and he likes to feint and trick you into parrying or dodging too early and then pierce you.  If you fight at a distance, keep your distance, and in the case of the Temple of Eiglay, the pillars in the room help to keep him from reaching you too often.  Upon reaching half HP, he will also be able to inflate himself and unleash a powerful shockwave move that is easily telegraphed and you can dodge roll out of just before he drops to the ground.

Additionally, he might inflate then roll around the room, usually making four passes at you, so dodge-roll forward into him each time and you’ll get through unharmed.  After these attacks, he is vulnerable for a short while, so rush in and bring on the hurt. 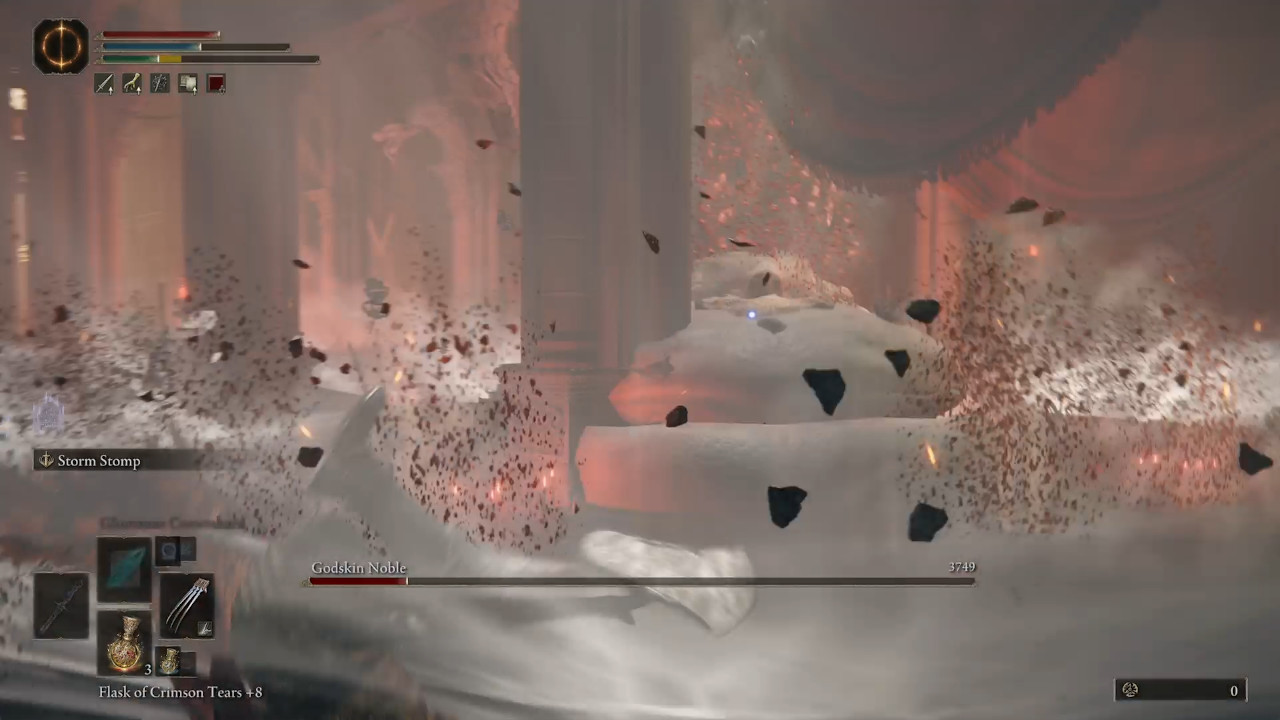 His Black Flame attacks are powerful and can inflict sustained damage over time, but are easily dodged.  If you fight him in melee combat he’ll sometimes unleash a shockwave that is quicker to hit you so try to adopt the hit and run mentality, and be sure to heavily consider coating your weapons to inflict Scarlet Rot as quickly as possible to avoid too many of these confrontations.

The Black Flame is still far less dangerous and prone to shenanigans than his sword, however, as pillars will block those projectiles, but his sword will go right through the environment in heavy or rapid strikes to end your battle quickly.  Unlike the Apostle, the Noble doesn’t dodge as many attacks but does close the gap more efficiently, so play smart and make sure your counter-attacks are quick and deadly.

Winning the fight at Volcano Manor gets you 70,000 runes, the Black Flame Ritual Incantation, and the Godskin Swaddling Cloth.  It also gets you one step closer to the major boss of the area.

This concludes our guide on How to Beat Godskin Noble in Elden Ring!  Be sure to check out our other guides, and our review!