How to Get the Touch of Malice in Destiny 2

an old king, back again. An old raid has returned to Destiny 2 and brought with it a slight touch of malice. The King’s Fall raid has been added to Destiny 2 and has brought with it all the goodies that players were excited to get in the original Destiny including the coveted Touch of Malice exotic rifle. Just like the original Destiny, many players are going to want to get their hands on the new raid exotic. Let’s go over how you can get Touch of Malice for yourself in Destiny 2.

How to Get the Touch of Malice in Destiny 2

While many of the mechanics of the King’s Fall raid have changed for Destiny 2, so has the way you get Touch of Malice. You no longer need to complete a questline to get the exotic Scout Rifle, but the way you get it now might be worse for some. Much like every other raid exotic, you have a chance of this Scout Rifle being dropped as a part of your loot for killing Oryx at the end of the raid. The only thing that will hold you back from getting Touch of Malice is RNG. You will have three chances each week to get the Touch of Malice as long as you have three characters that are able to complete the King’s Fall raid.

The Stats for the Touch of Malice in Destiny 2 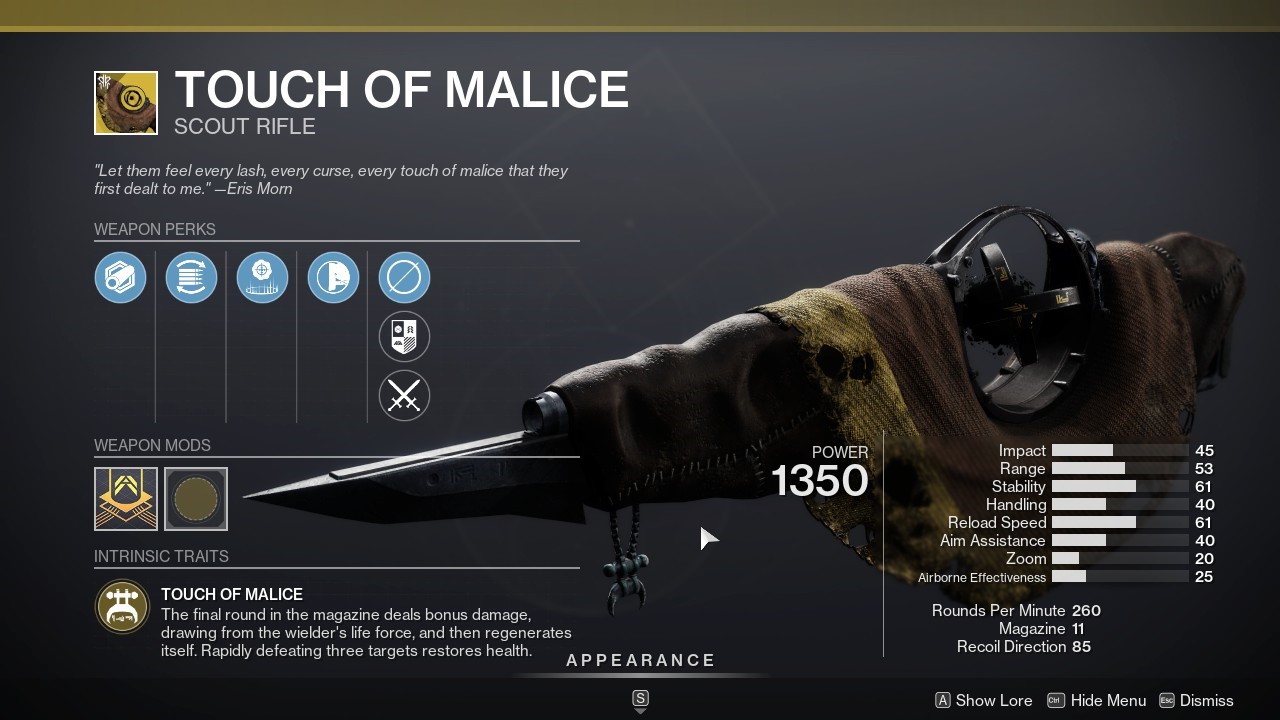 Not only has the way you obtain Touch of Malice changed but so have the stats and exotic perks of the weapon. Touch of Malice does fall in line with Destiny 2 exotics by no longer having multiple perks to choose from but it has gained a new effect. Before we cover the effect let’s go over the stats for Touch of Malice.

The Scout Rifles features four perks slots with no options to change them. Polygonal Rifling to provide an increase in stability, Flared Magwell which provides more stability and reload speed, the Hand-Laid Stock which provides even more stability, and the final perk is Charged with Blight. Charged with Blight is the new perk Touch of Malice gains which provides a new use for drained health. Hitting headshots will drain the health of combatants and charge up the ball of darkness on the weapon. When it is charged you can press reload to fire the ball out of the weapon and blind anyone that is hit by it.

The exotic perk Touch of Malice shares the name of the weapon and works similarly to its original Destiny counterpart. The last round in your magazine will deal bonus damage at the cost of your health and keep regenerating itself. If you manage to rapidly kill three targets you will restore a bit of health. If you need any more help with Destiny 2 make sure to check out our other guides.