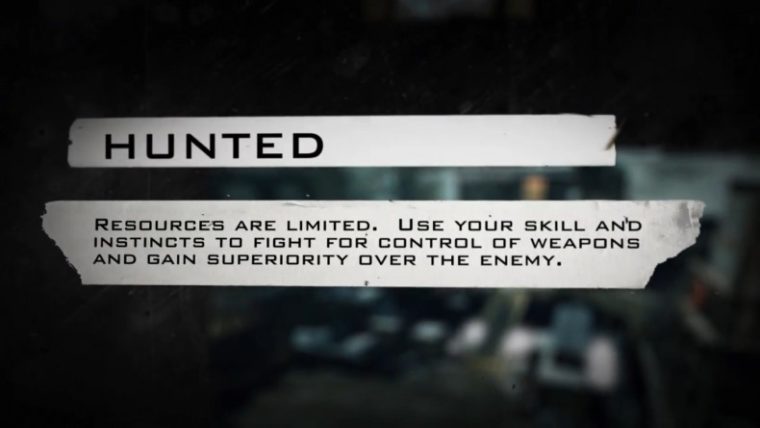 So, maybe you haven’t had a chance to try out one of Call of Duty Ghosts’ new game modes; ‘Hunted’ yet. Maybe you’ve been too busy taking advantage of the Double XP weekend, been preoccupied with blasting aliens into tiny chunks or battling through the single player Campaign. Well, I’m here to tell you why you should try out Hunted, because it really is a hidden gem.

For those that are complete unaware, Hunted is a new game mode in Ghosts. The rather cryptic official description can be seen in the picture above, but that’s not really enough to go on. Put simply; in Hunted you spawn with very little. You have one magazine of a pre-determined pistol, two throwing knives and a 9-Bang tactical grenade. From the start, and throughout the game, care packages will drop onto the map with 6 weapons in. If you can get to one of the boxes, you can pick a random gun out of the box. However, these guns will also only have one magazine of ammunition.

The main aim of the game is the same as TDM. You win by getting more kills than your opponent. The easiest way to do this is to get better guns than the starting pistol from a care package. Everyone has the same loadout throughout the game, which includes the Specialist Strike Package. Hunted is fast, frantic and lots of fun. It feels like a mixture of the Wager Matches from previous games.

One of the reasons that I like it so much is that it’s a great leveler. From the start to the finish, how you do depends very highly on your tactics and ability with a variety of weapons. Players of a higher rank than you have no advantage due to better weapons or perks. As a result, I’ve been using new soldiers that are ranked under 5 to get quick squad points. Heading into a normal game mode as a Rank 2 soldier is nearly suicide, but heading into Hunted with the same character is easy SP and Squad leveling with no hassle.

Finally, here’s a few tips that I’ve picked up from my time playing it:

So there you have it. A brief explanation of what Hunted is, why you should try it out, and some tips for when you do. Hopefully this was helpful, please leave a comment below and also check out my guide on how to level up and earn squad points quickly for Call of Duty Ghosts as well.