Immortals Fenyx Rising: Blurry Vision Guide – How to Get the Wing Piece

Arrange the orbs in the correct pattern to solve the puzzle. Early in Immortals Fenyx Rising, you’ll receive a quest called Blurry Vision that presents you with a blue orb puzzle to get the Wing Piece. The Wing Piece grants you the ability to glide, so it’s a very important item that will help you traverse the Golden Isle. This quest is the final step before leaving the starting area of Clashing Rocks and heading off to the mainland where the real game starts. Finding these blue orbs can be a bit tricky, however, but we’ve got your back with this handy guide. Here’s where to find the blue orbs for the Blurry Vision quest in Immortals Fenyx Rising.

When you first find the Wing Piece, it’s stuck behind a red wall that’s preventing you from taking it. There’s a grid nearby with a blue orb slotted into one of the holes, and it looks like there are four other blue orbs missing. They can be found in the nearby buildings, each guarded by a small puzzle. The blue orbs are hidden in the following locations: 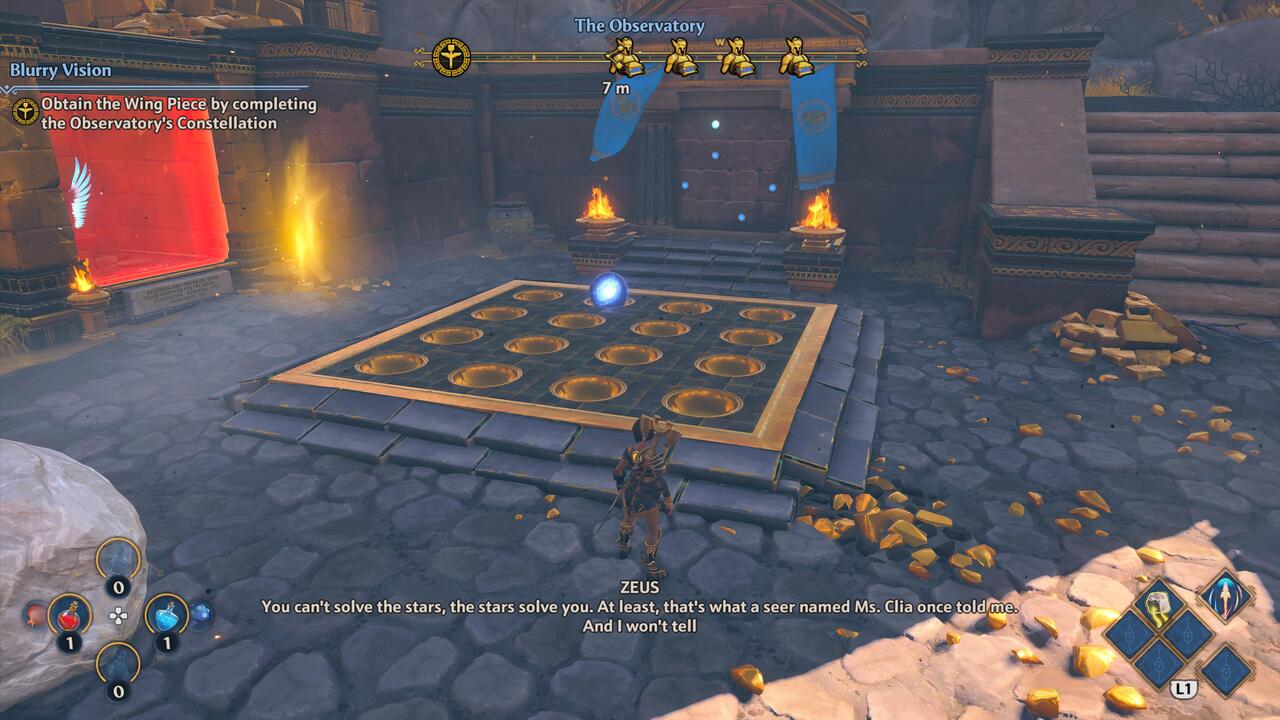 The first orb is already on the grid. If you head up the stairs next to the grid and immediately head left, you will see a lever. Pulling this lever will open a locked gate straight ahead. Sprint inside the locked gate, using the steps to the left to climb over the red wall. Inside, you’ll find the second orb. Instead of turning around and leaving with the orb, however, you must use this orb to unlock the third orb, which is hidden behind a locked gate right next to the orb you just found. Place the orb in the pressure slot and the gate will open. Take both orbs and bring them back to the grid in front of the Wing Piece. To find the fourth orb, head up the stairs next to the orb grid and turn right. You’ll see an orb behind a locked gate. There’s a pressure plate you can stand on nearby with two lit braziers nearby. Stand on the pressure plate and see Apollo’s Arrow to guide an arrow through the lit brazier in front of you and ignite the unlit torch on the top right corner of the gate. Once the torch is lit, the gate will open revealing the orb. Grab it and take it back to the grid. 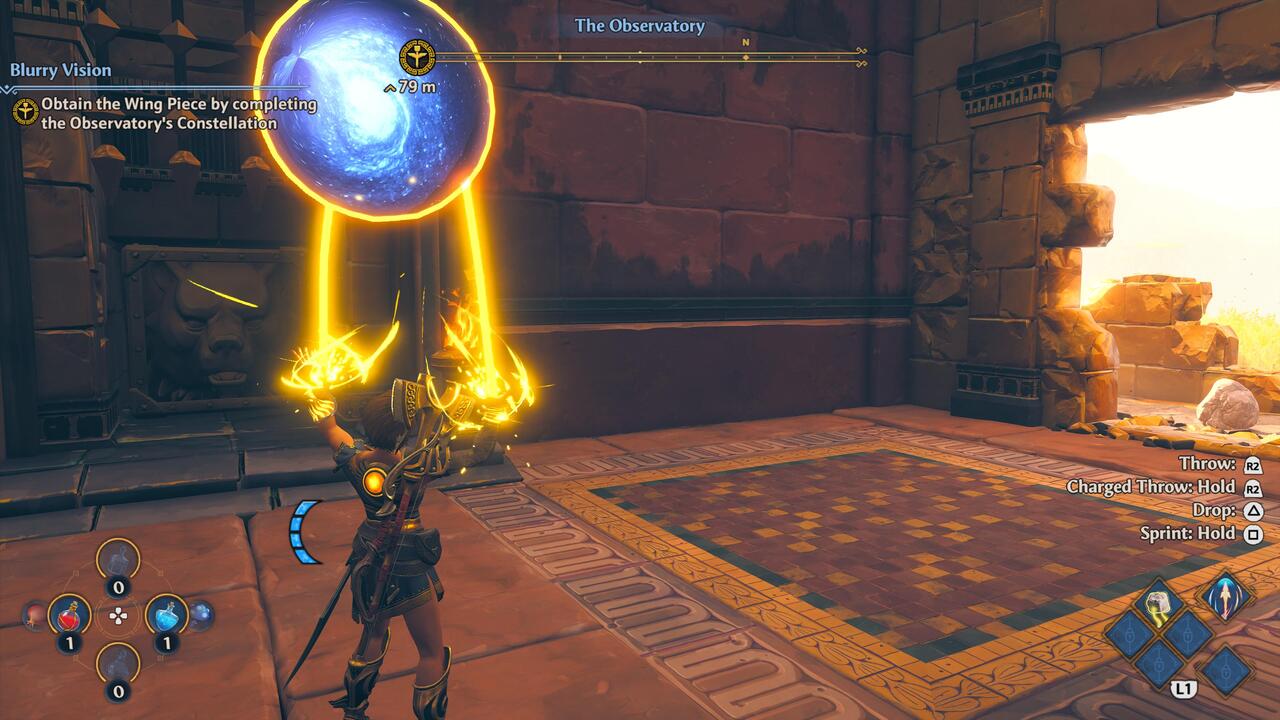 For the final orb, go down the stairs to the right of the orb grid. There’s an orb inside the giant building at the bottom of the stairs, but there’s no clear way in. If you head around the right side of the building past the big burning brazier, you’ll see a golden portion of the wall that has several cracks in it. Hit this wall with your axe to break the wall and get inside. To get the orb, push the metal box back and it will drop down on its own. Grab it and take it back to the grid. 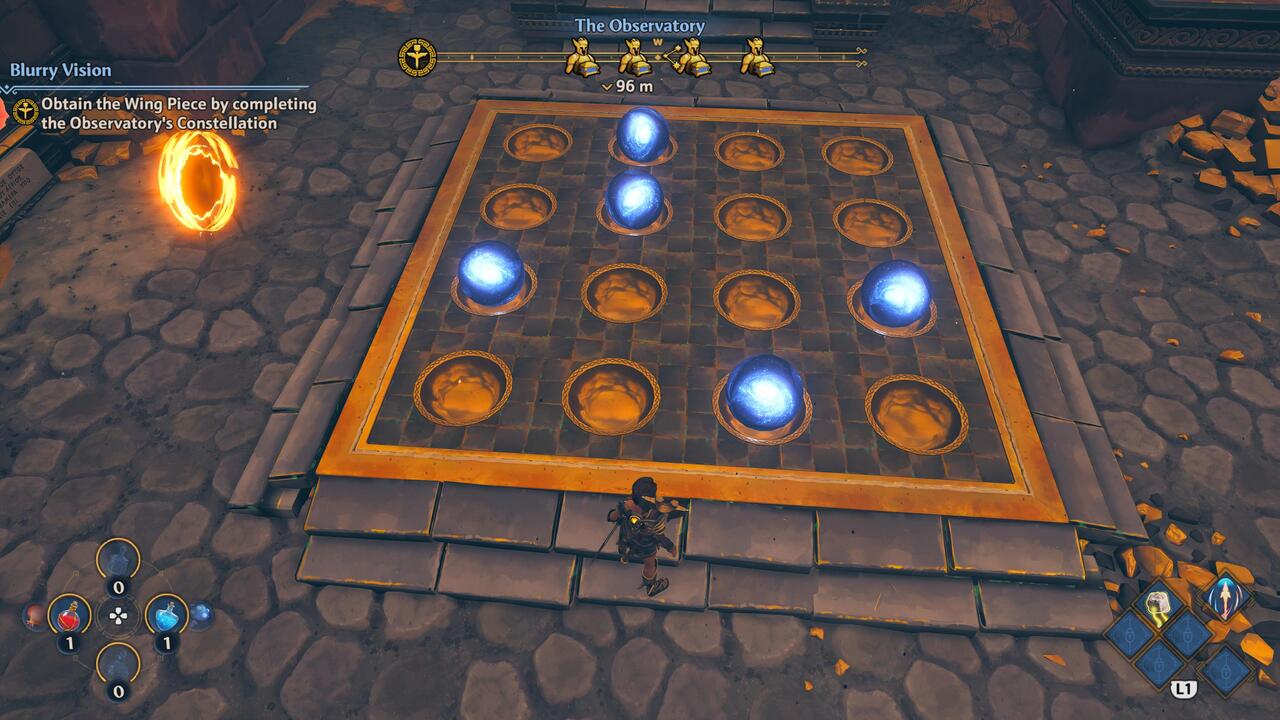 Once you’ve acquired all five blue orbs, you’ll need to arrange them in the correct order to access the Wing Piece. Place them in the slots pictured on the nearby wall or use the screenshot above for reference.

Getting the Wing Piece

Once you’ve solved the puzzle, a yellow portal will appear. Reach inside to receive two Coins of Charon, and then a cutscene will play. Once the cutscene ends, you will receive the Wings of Daedalus. They won’t let you glide just yet, but you will unlock the ability shortly.