Jotun Guide: How to Beat Fe the Cave God 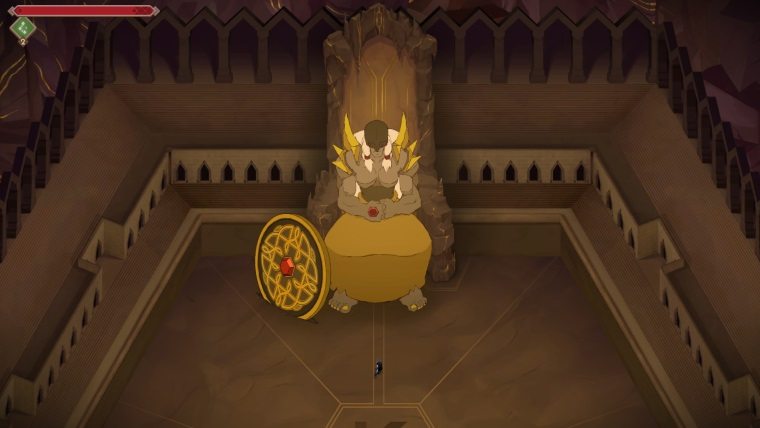 Despite being one of the first Jotun you are supposed to face in the game, Fe the Cave god is actually one of the toughest in the game. With dwarves swarming around her feet, ready to attack the player at a moments notice, combined with some of the fastest and most effective attacks of any Jotun, Fe will be a challenge for any player. Here’s some tips to take her down once and for all.

Fe may be big, but she’s also slow. Get underneath her and hack at her feet and ankles, taking out any errant dwarf that gets too close to you. Stick to weak attacks, as a strong one will likely miss as Fe moves out of your range. If she starts charging up a Shield Bash, where she lifts her shield and slams it into the ground, try to roll between her legs. This will avoid the attack, and keep you in striking distance while she recovers.

When she does her Shield Throw is where things really get interesting. This attack is almost always preceded by an Enrage, where she screams and gets all of the dwarves to swarm at Thora, striking wildly. Luckily you are faster than them, so you can outmaneuver pretty easily, just make sure you don’t get surrounded or it’ll all be over faster than you can hit the heal button (if you have that power of course).

Once she starts yelling and enraging the dwarves you have to act quickly. Pick a good direction and start heading that way in a straight line. Avoid any dwarves by side-stepping. The goal here is to get the dwarves lined up behind you in path back to Fe. She’ll charge up her Shield Throw and once the dwarves stop following you, begin your rolls out of the path. If you do this right the shield will barrel through the dwarves, killing dozens, but you’ll roll right out of the way.

Head back and repeat this process until Fe hits her final form, where she slams her hand into the ground and pillars appear on the outskirts of the level. These are important and will help you in the endgame of this battle.

By striking these pillars you, or Fe herself will cause boulders to fall from the ceiling. You can avoid them rather easily, watching for shadows and rolling as necessary. Fe, on the other hand, is a Jotun, meaning she is big and moves slow. The boulders should deal a ton of damage to her, so take out each pole as soon as the last one finishes its assault, avoiding attacks as much as possible.

Do this enough and Fe should be much weaker, but likely not dead. You’ll have to move back in, being careful to avoid her powerful hits. Strike her a few more times and Fe should fall to Thora’s might. Another Jotun down, a few more to go.