Life is Strange: True Colors: All Major Choices in Chapter 1

Here are all the decisions you can make in the first episode. Chapter 1 of Life is Strange: True Colors is filled with choices large and small. Even though it’s the first episode, some of the decisions you make here will have consequences later on, although you won’t be deciding your ending or anything like that this early in the game. Still, here are all of the major choices in Chapter 1 of Life is Strange: True Colors.

All Chapter 1 Choices in Life is Strange: True Colors 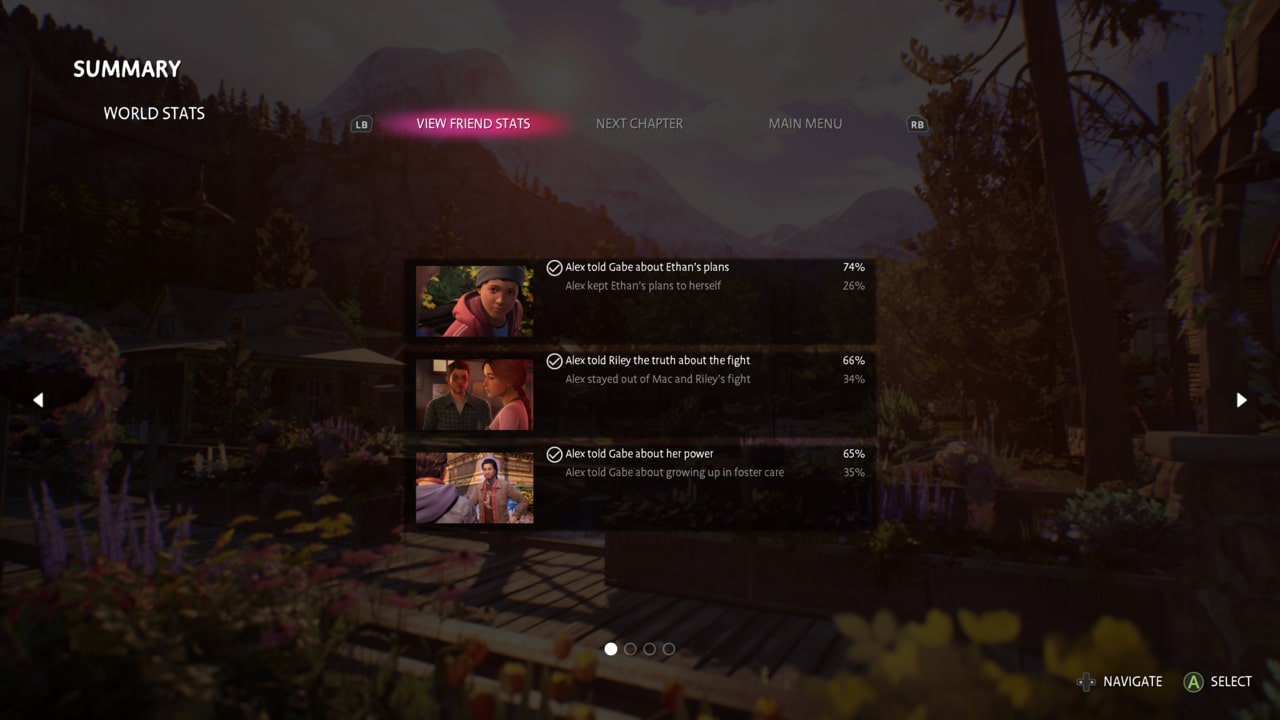 The first important decision you can make in the first chapter involves Ethan’s secret plans. You can either tell Gabe about Ethan’s planned trip to the mine, or you can keep it a secret. Either way, Ethan still goes through with it.

Telling Gabe About Your Power

This choice doesn’t affect anything outside of your relationship with Gabe. When you talk to him on the rooftop, you can come clean about your empathy power or just talk about Alex’s tough time in foster care. This choice doesn’t affect anything but your relationship with Gabe, and even then, not by much. You can either go in for the hug or just choose to shake hands instead.

Riley is trying to get into college, and she asks Alex for advice for her interview. You can either encourage her to be honest or tell her to show off. Neither option has any effect on Riley’s chances.

Talking to Ryan About Gabe

Ryan asks Alex about Gabe at the record store, and you get to choose what kind of story to tell about him. You can either choose to say he was a dork or he was a badass. Neither option leads to a different outcome.

When speaking to Charlotte at the Black Lantern bar, she’ll ask how Alex feels about living in Haven. You can either express optimism or pessimism about your new living situation, or you can tell her you aren’t sure how you feel. Neither option affects anything.

When Alex gets to Gabe’s apartment, the two will have a good old-fashioned jam session. You can play the broom guitar, or you can watch on as Gabe rocks on. Neither option affects anything.

In this chapter, you can place sunglasses on the gnome in the flower shop, stop and listen to music in the record store, and find evidence of Gabe’s search for Alex by snooping around the apartment. None of these have any real effects, but they do show up in the post-episode summary. Lying About Being a Sever

Gabe told Jed that Alex used to work as a server in a restaurant. You can either be honest with Jed and tell him that Gabe was lying, or go along with the story and fake it until you make it. If you lie and perform poorly, Jed will find out. If you’re honest, he won’t be upset.

When Alex gets the guitar, you can either tell Gabe she loves playing the guitar or admit that Alex’s playing skills are a little rusty. Neither option affects anything. Steph is at one of the tables in the bar, and you can play a jukebox guessing game with her. There are only two outcomes: win or lose. You can also avoid playing the game entirely to focus on serving. This choice doesn’t affect anything.

Depending on your choices throughout the chapter, Riley and Mac can either break up or remain together. This choice will affect their relationship going forward, as well as some minor dialogue between them and Alex later on.

Duckie and Gabe had a wild night of drinking, and it’s up to you to find his whiskey in this optional side quest. There are only two outcomes: you can either find Duckie’s whiskey or not find it. This will affect your relationship with Duckie slightly.